Fiorina’s and Clinton’s Presidential Runs: The Irony Is in the Analytics

There will be a lot of irony in the U.S. presidential primaries and general election as campaigns ramp up later this year. Last time, with Mitt Romney, we saw a business multimillionaire and ex-governor get schooled in how to use analytics by a guy who wasn’t even that experienced in politics.

Granted, the president may have sold his soul to Google in exchange for the win, but it was kind of like watching Jon Stewart beat Tiger Woods at golf.

Well, there are two women running for president this time — Carly Fiorina and Hillary Clinton — and it’s likely that analytics, which comes from the male-dominated technology industry, once again will deeply influence who experiences either the excitement of victory or the agony of losing to someone less qualified.

I’ll analyze that this week and close with my product of the week: the new Surface 3 tablet from Microsoft, which showcases the “rule of threes.”

When an experienced politician and businessman ran against an inexperienced president with a collapsing approval rating, there should have been only one outcome — but that wasn’t the one we got. Consequently, I’m sure Mitt Romney’s view is far less positive about that irony than Barack Obama’s.

The prior election cycle was even more ironic, because twice there were career politicians going up against a novice (in the primaries, Clinton, who couldn’t lose — and in the general, McCain, who seemed to have earned the post). Both times, the president fielded an amazing team of technology experts who were able to do a better job, by far, at analyzing the voters, and then using their analyses to create a campaign with social media at its core that kicked the vastly more experienced candidates’ butts all over the political playing field.

It was like David and Goliath — but with David using a bazooka in the final battle. It was sort of understandable that maybe McCain and Clinton didn’t get analytics, but Romney should have been able to run circles around the president. Instead, he fielded an inept team against the president’s experts. That’s not confidence — that’s stupidity, and all of those folks basically handed the president a win because they failed to bring their A game.

Let’s set the stage. There are two players: Carly Fiorina, a multimillionaire businesswoman who used to run one of the largest technology firms in the world, HP, which happens to be one of the founders of modern analytics; in the other camp, Hillary Clinton, who once again supposedly can’t lose, but who watched the president beat her and his Republican challengers, using an analytics team he acquired.

Obama doesn’t appear to know technology any better than any other general politician — he just hires people who do — or borrows them from Google.

Analytics is a blend of technology and math, and both fields are dominated by men, who make up most of the field of presidential candidates. Given how powerful analytics has been in the last two elections, this would suggest that men would roll over their female counterparts very easily — but we’ll likely see that is not the case, because male politicians tend not to be good at either math or technology. In and of itself, that is both ironic and likely explains why approval ratings are dropping while the national debt is rising.

All any of these people should have to do is emulate what Obama did, and follow the direction of the analytics team, to massively increase their standing and increase the probability of winning like the president did. However, I don’t see any of the male candidates doing that, which suggests that Fiorina and/or Clinton could ensure their wins just by using the skills they should have acquired being a tech CEO and working for the current administration.

It would be ironic if either Carly Fiorina or Hillary Clinton successfully used analytics, a male-sourced weapon, to beat the slacks off their competition. What would be even more ironic would be if neither of them used a tool they both should be well acquainted with because they never understood its power and effectiveness.

Both of these women and, in fact, all candidates who fail to learn the lessons associated with the power of analytics — which is basically having something damn close to a crystal ball — deserve to lose and to spend the rest of their lives having people point out to them that the reason behind their loss was failure to learn from Obama’s success. Basically, they were stupid.

Adding insult to injury, a little company called “Beyondcore” last week announced an analytics tool that works with Microsoft Office and is so simple even a politician could use it. Talk about rubbing it in.

The rule of threes dictates that the third version of any product will make the greatest contribution to customer satisfaction. That is because the first version tends to be a crapshoot, and the second version just fixes minor initial problems and comes too soon for the components folks to do redesigns. The third version takes advantage of full customer feedback, and everyone has time to implement that feedback into the product.

The first version of Surface gave folks an ugly choice: either a crippled ARM-based product with limited functionality but the price, weight and battery life of a tablet; or a full-featured offering that was expensive and heavy, with poor battery life. Both software and hardware would have to evolve massively so that a product that actually came close to the ideal of a tablet a user could work with could be built.

The result is the Surface 3, which uses the newest Intel Atom processor. It took this long for Intel to bring out a part that really could provide the right blend of performance, price, weight and productivity for a tablet. 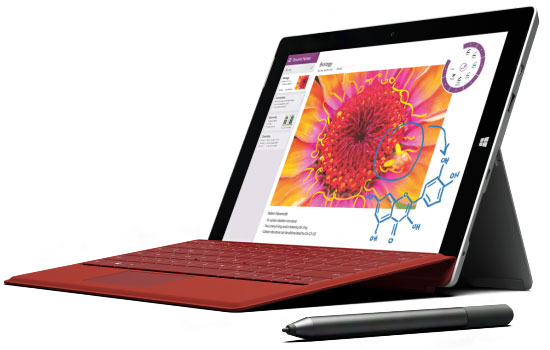 The Surface 3 is lighter and less expensive. It has around 10 hours of battery life and runs both new and old Windows apps. It turns what should have been — but wasn’t — the most popular configuration into something people actually should want to buy and use, relegating Surface Pro to the high end, where users are willing to pay more to get more, but which represents just a fraction of the overall market opportunity.

I’m actually writing this with my Surface Pro 3, which is like an Ultrabook in tablet clothing. The Surface 3 is much closer to the tablet ideal, and I think far more people will really like it, so it is my product of the week.