The Charge HR and Surge will be available early next year. The Charge is available now on Fitbit’s site and is coming soon to retailers nationwide.

Steep competition has driven down fitness-tracking device prices. For example, Pebble cut its smartwatch prices to $100 to $200 — a $50 reduction — while adding 24-hour fitness tracking. A Samsung Gear Fit is available on Amazon for $124, and a Garmin Vivofit fitness band costs about $100.

This strategy “will likely backfire unless there’s more to the product that has yet to be released,” Susan Schreiner, senior analyst at C4 Trends, told TechNewsWorld.

The Surge especially might be hit hard, because its price makes it “more likely to appeal to the hard-core fitness enthusiast” rather than the mainstream market, reducing its potential audience, observed Matt Wilkins, a research director at Strategy Analytics.

What the New Fitbits Deliver

Charge is a wristband with all-day activity tracking that offers real-time fitness statistics and caller ID. It has a sleep detection monitor and exercise tracking capability, and it is water-resistant. It runs for up to seven days on one charge.

The Charge HR adds 24×7 heart rate monitoring with LED lights, plus all-day display of information such as resting heart rate and heart rate trends. It runs five days on one charge. 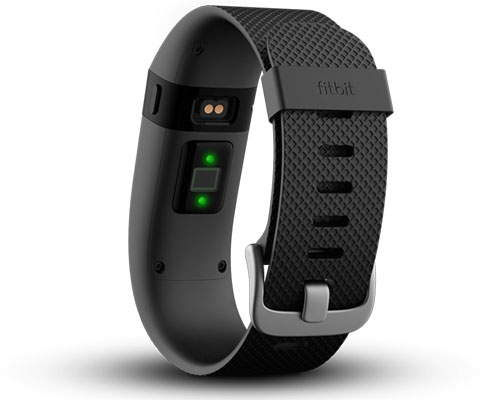 The Fitbit Surge has all the features of the other two devices plus a built-in GPS, text alerts, mobile music control, three-axis accelerometers, a gyroscope, a compass and an ambient light sensor. It also records multisport activities.

The Surge runs up to seven days on one charge.

Awash in a Sea of Competitors

Meanwhile, Lenovo has jumped in with the Lenovo Smartband SW-B100, and Pivotal Living on Monday announced its Life Tracker 1 fitness wristband for $12 — that’s right, $12 — for the device and its app.

Then there’s the Health app in iOS 8.

Of Recalls and Probes

Consumer complaints forced Fitbit to recall more than 1 million units of its Force wristband earlier this year and give purchasers a full refund, following an investigation by the United States Consumer Product Safety Commission.

Fitbit is facing two lawsuits — one a class-action — over the issue.

“CPSC has concluded its investigation into the Fitbit Flex, but we will continue to monitor the safety of the product,” CPSC spokesperson Scott Wolfson told TechNewsWorld.

Consumers will see a label on the product advising that it contains nickel, and the product will have sizing guidelines, Wolfson said, adding that CPSC believes the Flex should be worn loosely.

While news of the investigations might put off some consumers, “there are many more who will say it’s a fluke and that Fitbit has learned its lesson,” Schreiner said.

Given that smartwatches — and increasingly, smartphones — have fitness-tracking apps, will there continue to be a market for fitness wearables?

“While the fitness band market is facing competition from devices such as smartwatches, there are consumers who require a device to purely track their physical and fitness activity,” he told TechNewsWorld. “Some consumers will be in the market to buy a device that is purely focused on fitness tracking and not require the additional features that a smartwatch needs.”