Fleet of FireFlies to Probe Space for Mineral-Rich Asteroids 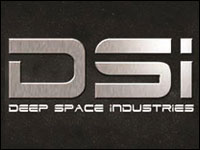 Deep Space Industries on Tuesday announced plans to launch a robotic fleet to scour space for asteroids that can be mined. The company will send out its FireFly spacecraft in 2015 on journeys of two-to-six months.

DSI will work with NASA and other partners to identify targets of opportunity.

The company will build the 55-lb. FireFlies using CubeSat technology. A CubeSat is a miniaturized satellite for space research that usually has a volume of exactly 1 liter and a mass of no more than 1.33 kg. It is built using commercial off-the-shelf electronics components. Most CubeSats are made by universities, but Boeing and some other large companies have also built these devices.

The FireFlies will piggyback on larger communication satellites being launched.

It will cost DSI US$1 million to launch a FireFly, and it reportedly seeking to raise $20 million.

In 2016, DSI plans to send 70-lb DragonFlies on round-trip missions lasting two to four years, depending on the target. The DragonFly expeditions will return with 60 to 150 lbs. of samples.

In addition to bringing back samples, DSI intends to use its patent-pending MicroGravity Foundry to transform raw materials on asteroids into complex metal parts. 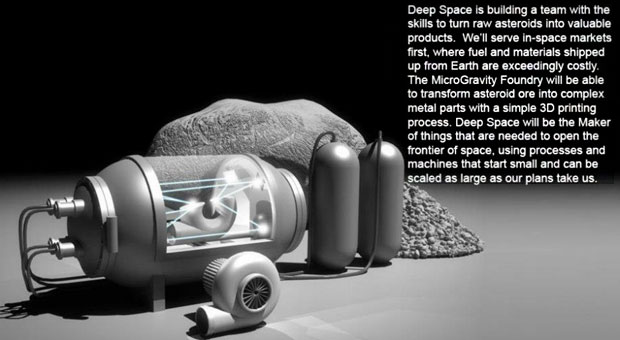 About the MicroGravity Foundry

The MicroGravity Foundry is a 3D printer that uses lasers to draw patterns in a nickel-charged gas medium, causing the nickel to be deposited in precise patterns.

3D printing creates objects by setting down successive layers of material that can range from thermoplastics to metal alloys, plaster, metal or ceramic powders, or liquid resins. The technique is used in creating jewelry and footwear, as well as aerospace equipment and medical and dental devices.

It could conceivably be used to print replacements for broken parts on spacecraft flying to and from Mars, or to create new parts invented during an expedition to Mars.

“The idea is feasible,” Carl Howe, vice president of research at the Yankee Group, told TechNewsWorld. Vaporizing metals typically would require lasers that consume “hundreds to thousands of watts,” but the satellites could use weaker lasers over a long period of time instead.

The MicroGravity Foundry might vaporize asteroid rock, somehow select the metal desired, and direct that metal to another area where another process would deposit it in patterns, Howe speculated.

DSI is the second company to announce plans to mine asteroids. Planetary Resources, which is financed by wealthy backers including Google CEO Larry Page and Chairman Eric Schmidt, and multibillionaire businessman Ross Perot Jr., was launched last year.

“President Obama’s space policy is aimed at creating an environment where commercial space companies can build upon past successes, allowing NASA to focus on the Administration’s ambitions path for deep space human exploration,” NASA spokesperson Allard Beutel told TechNewsWorld. “The increasing number of private U.S. companies attempting to push the boundaries of space shows the wisdom of that policy.”