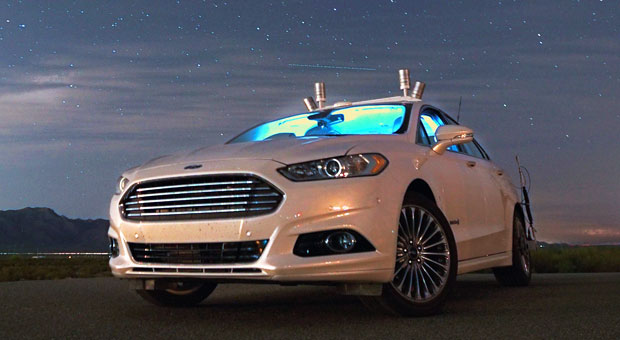 Ford on Monday revealed that it has been testing its Fusion Hybrid autonomous research vehicle with no headlights on remote desert roads at night.

While such a task would be quite perilous for a human driver, it was an important step in developing a fully autonomous vehicle, the company said.

The test vehicle relied not on cameras, which require light, but instead on LiDAR technology for navigation. LiDAR worked in conjunction with the car’s virtual driver software to navigate the pitch-black and winding roads at the FordArizona Proving Ground.

Ford engineers were present during the testing, both inside and outside the vehicles, with night-vision goggles to monitor the Fusion, the automaker said.

Autonomous vehicles largely rely on three modes of sensors — cameras, radar and LiDAR — but Ford’s recent tests suggested that LiDAR could function independently on roads without street or stoplights.

Being able to navigate in pitch-dark conditions is crucial in the development of autonomous vehicles, especially as National Highway Traffic Safety Administration research has found that fatality rates in passenger vehicles were three times higher during nighttime hours, Ford said.

“This test was one part of our extensive autonomous vehicle development program that is taking place on roads and test tracks in Michigan, Arizona and California,” said Alan Hall, Ford’s spokesperson for technology, research and innovation.

“Since LiDAR plays such a key role in delivering level-four autonomous capability, meaning that the driver is not required to be engaged in the driving process, this test was meant to take its capability to the extreme,” he told TechNewsWorld.

“We will be conducting a lot of testing to cover a wide range of scenarios, Hall said.

The LiDAR system technically doesn’t “see” the road ahead. It works in conjunction with high-resolution 3D maps, which include information about the road, road markings, geography, topography and other landmarks such as signs, building and trees. The LiDAR system then sends out some 2.8 million laser pulses a second to pinpoint itself on the map in real time.

“The LiDAR sensors can generate and contribute to 3D maps or other very accurate 3D representations of the objects around the vehicle,” said Jeremy Carlson, senior analyst for autonomous driving at IHS Automotive.

“One advantage to this for nighttime driving is that it is not sensitive to light like a camera, which doesn’t typically perform as well in low-light situations,” he told TechNewsWorld.

Being able to navigate — if not see the road — at night is crucial for a self-driving vehicle.

“The fully autonomous self-driving car has numerous technical hurdles to overcome, one of which is maneuvering in low-visibility driving scenarios,” noted Arunprasad Nandakumar, mobility team leader at Frost & Sullivan.

Ford’s latest tests were a way to showcase the possibilities that LiDAR brings to the mix of sensors. Yet one sensor alone wouldn’t be enough for any autonomous vehicle, as it is the redundancy of sensors that allows the car to do the driving.

“There are numerous other technical challenges that autonomous vehicles possess today, [including] the need to position the vehicle relative to the driving environment with high precision, which is vital for developing a strong validation layer that complements the decision-making process of self-driving cars,” he said.

“The large set of unknown use cases that the car would encounter in real-life driving that cannot be tested is another key challenge,” Nandakumar suggested. “That is where aspects like HD mapping and artificial intelligence play a pivotal role.”

Tests of that nature will continue to be essential for creating a solid framework and a fail-proof self-driving system for the future, he noted.

“Test beds like the recently announced Willow Run driverless car test site and many others help to create a foundation for testing and validating the autonomous driving products though multiple simulated scenarios before it can be expanded to the next stage of real-world testing,” Nandakumar added.