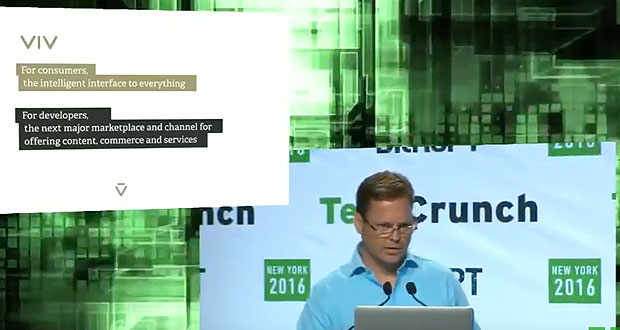 Kittlaus, the former CEO of Siri, and other Siri vets cofoundedViv in 2012.

The artificial intelligence-enabled interface requires no user manual and can handle complex tasks via simple commands. It eventually will make many of the most tedious aspects of existing apps, sites and services obsolete, Kittlaus said.

That kind of digital assistant is far from what we have now with Siri, Google Now, Cortana and Alexa.

“These systems are primarily working on observations of past behavior and patterns,” said Julie sk, principal analyst for e-business at Forrester Research.

“They are not yet solving new problems and building new insights. Most of this is what we call ‘static assembly,'” she told TechNewsWorld. “Think Amazon Echo — a few APIs and a few integrated services. Not the universe of services.”

Echo, which has a speech interface that uses Alexa, is a smart speaker that handles a limited number of tasks compared to digital assistants such as Siri, Cortana and Google Now.

Voice-powered interfaces with AI provide users with a more natural experience, sk noted. “Apps are unnatural in many ways and demand orchestration from the consumer. Bots and AI can be more natural.”

The existing array of digital assistants is a prelude to a world of digital robots or bots. “They’re the first step toward having digital servants in our lives that are somewhat intelligent,” noted Rob Enderle, principal analyst at the Enderle Group.

“Interaction with those servants will be by voice without the safety net of a keyboard or screen. Alexa, the digital agent in Amazon’s smart Echo speaker, is where digital assistants are headed,” he told TechNewsWorld.

“Siri, Cortana and Google Now are all alternatives to a screen and touch. With Alexa, you don’t have that option. You’re only going to talk to Echo because it doesn’t have a keyboard, mouse or screen” Enderle continued. “Ideally, you won’t have a phone or PC. You’ll just speak, and the digital assistant will do.”

Viv is entering a market that could define the digital world of the future.

“It’s not for nothing some of the big players have already tried to buy these guys,” he told TechNewsWorld.

Both Facebook and Google reportedly have made offers to purchase Viv.

“Everyone recognizes that at some point in time, voice is going to be an important differentiator,” Enderle noted.

Viv is the new kid on the block forced to compete with established players, although that block doesn’t seem to have a clear leader yet.

“Nuance seems to have the greatest history and archive of AI, but other contenders — Google, Apple and Microsoft — all have versions of their own, and Amazon has a solid hit with the Echo,” Kay said. “So it’s an open horse race.”

The edge goes to Facebook in that race, said Forrester’s sk. “Facebook has the best shot given the audience they own and their success with Messenger, but don’t rule anyone out.”

Whatever the outcome of the race, the stakes are high.

“This will be the next generation of computing,” Enderle said, “so whoever gets this right first could be the next Microsoft.”