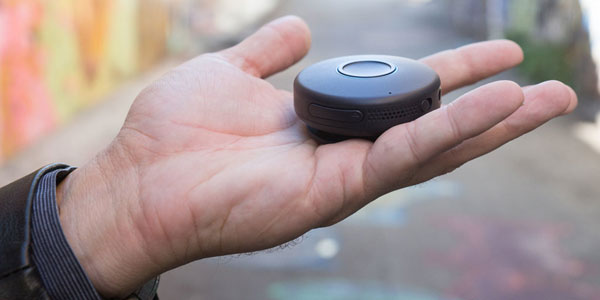 Welcome to another installment of every tech-loving optimist’s and misanthrope’s favorite look at the week’s most wondrous and pitiful new gadgets. We call it “Gadget Dreams and Nightmares.”

Ahead, for your delight and dismay, are studies of a wearable walkie-talkie-type communication device, a 360-degree action camera, a tiny 3D printer, a smart camera attachment, and a clever mobile roaming solution.

As ever, the ratings are reflective only of my interest in using each item. These aren’t reviews, to be clear.

I propose a new litmus test to measure the stylishness of wearables: If it wouldn’t look good on a beautiful Hollywood star attending the Oscars, then it won’t look good on anyone. In that regard, having OnBeep’sOnyx communicator adorn Scarlett Johansson or Jon Hamm on the Academy Awards red carpet would be akin to graffitying the Mona Lisa with “#GamerGate” in streaky red paint.

It’s not simply visually ghastly — it’s functionally useless too. It’s attempting to solve the “problem” of wearable communications, particularly in the enterprise sector. Anyone who needs a hands-free option likely already has a earphone-microphone setup (or Google Glass, even).

It’s pointless. I could achieve the same thing by holding the button on my earphones and asking Siri to send a voice message to my close family or friends. Not to mention the myriad group chatting apps that are more valuable than this. It’s never going to supplant the usefulness of WhatsApp.

Please, developers, spend your time on creating items that solve problems instead of creating new ones. Don’t ask us to wear a hockey puck on our shirts all day.

Like everyone else with a pulse for adventure and too much malaise to do anything about it, I ravenously enjoy action videos shot with cameras like GoPro. Kodak’s trying to evolve the genre with its latest model, the PIXPRO SP360 — an action camera that shoots in 360 degrees.

In rapid, action-packed situations, there’s no time to worry about framing or capturing the best angle, so capturing as much of the scene as possible is surely enticing to adrenaline fanatics.

The types of videos it results in are fascinating — a wildly different look on the world around people who are, say, jumping out of airplanes and hurtling toward terra firma.

Personally, I’d be more inclined to try it out if there were an audience out there for 360-degree footage of leisurely strolls through the park.

I’ve yet to delve into 3D printing, and at US$300, the iBox Nano mini printer seems as good an entry point as any.

There’s no chance that you’ll be able to print a 1:1 scale car model with this, since it’s a dinky contraption, yet it seems a compelling way to get one’s feet wet due to its small size.

Better still, the makers promise this is a quiet machine, which is just as well since the droning mechanics of most printers in action are nigh intolerable.

Never again need I live without a spork.

Rating: 3 out of 5 Plastic Figurines

This is a curious project aimed at boosting the usefulness of a DSLR. The attachment acts as a way to quickly share photos (through a smartphone connection), backup photos automatically to Flickr or USB storage, and enable remote control by smartphone.

Even better, Lumera is an open platform, so other developers can wade in to make it stronger.

At its most recent iPad event, Apple pitched the tablet as the world’s best viewfinder for photography. I have enormous reservations over tablet photography, but this could be the key to unlocking it as an essential photography tool. If only I had a DSLR.

Rating: 4 out of 5 Candid Snaps

Here’s a smart way of avoiding colossal roaming charges while traveling. KnowRoaming’s stab at fixing the problem is a sticker that sits on top of your regular SIM.

It’s great that I wouldn’t have to worry about losing the sticker after returning home. With a regular travel SIM, I’d have to swap back in my regular SIM once I’m home, but KnowRoaming promises the sticker can just stay on the SIM and it will switch me back to my home network automatically.

If the sticker had to come off once I left the plane, it’d surely disappear even faster than the brick of fine cheese I most definitely don’t have in my carry-on.