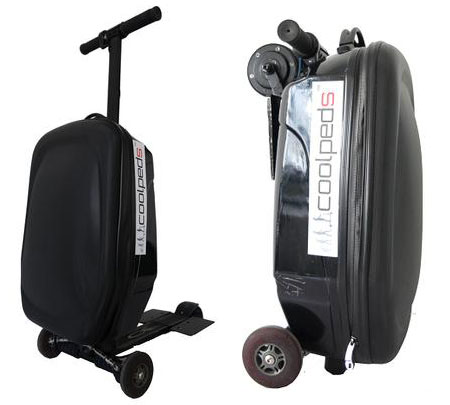 Salutations, travelers, and welcome to a new iteration of Gadget Dreams and Nightmares, the column that hoists up quality new gadgets for the world to see and condemns those that don’t cut the mustard.

Among the items on our sandwich board this week are a suitcase with extra zip, the new Pebble smartwatch, a groovier turntable, and a smartlock with a twist.

As ever, the ratings on each item mean nothing — other than to denote how interested I am in using the product — because these are not reviews.

Even for someone endlessly in awe of our ability to traverse continents in just a few hours, traveling is increasingly a chore. Anything I can add to trips to make them even a touch more enjoyable is nothing to sniff at.

Coolpeds’ briefcase e-scooter (pictured above) — a suitcase with a built-in, motorized scooter — may be just what I need to freshen up journeys.

It’s just as well there’s a built-in transport system on this, given the suitcase alone weighs a whopping 17.4 pounds. It might be carry-on size, but that’s certainly far beyond your typical carry-on luggage weight.

On the positive side, the scooter can transport you up to six miles on one charge at speeds of up to 12.4 mph. There’s a solar-powered model as well, presumably to encourage those who live in locales that are frigid this time of year to take a vacation.

I look forward to the day when I can zoom around airports. I can’t wait for the day I crash into knees as I careen along train aisles.

Until then, you’ll find me carting my boring old case around the terminal, feverishly anticipating the days of lazier international transit.

Rating: 4 out of 5 Quick Trips

I’ve mentioned before my ambivalence towards smartwatches, but my cynicism is taking a dent thanks to the new Pebble Time.

With a color e-paper screen taking over from the e-ink original, it’s got a little more visual verve. Add to that a microphone for voice replies to notifications and the hardware’s had a serious improvement.

What’s most interesting is the timeline interface, which arranges nuggets of information from your apps into a cohesive, single view. It’s a compelling way of presenting disparate data from across a multitude of sources in a way that makes sense on a small display.

I like Pebble a bunch. Among other things, the understated design and week-long battery life make me far more amenable to it than many other smartwatches. Based on what I know of each, I’m more inclined to pick up a Pebble Time than an Apple Watch.

Rating: 5 out of 5 Skipped Stones

As if a turntable weren’t enough to denote someone as a bit of a hipster in 2015, here’s a version that adds an artisanal spin.

Audiophiles with an affinity for the outdoors may enjoy the Silvan Audio Workshop’s range of wood turntables. They’re all handcrafted, with the electronics provided by high-end audio manufacturer Rega, so the sound quality should be good.

There’s actually a purpose to the wood body of these turntables that goes beyond the aesthetic: They apparently help stabilize records so they don’t skip while you’re dancing around your living room.

I can’t say I’m desperate to rush out and contribute to the Silvan Audio Workshop’s crowdfunding campaign to make sure I get one of these. The wood finish rankles me a little.

I enjoy the woodsy aesthetic for the most part, and my mind frequently wanders back to Bang and Olufsen’s gorgeous BeoSound Moment tablet-esque music controller, which has a pristine wooden finish.

Silvan’s products aren’t quite what I’d want to have taking up prime home real estate, even if there is vast potential for great puns when playing records from Wye Oak, Screaming Trees or Woody Guthrie.

Smartlocks nestle just below smartwatches on the list of gadgets that don’t inherently interest me. However, Sesame is trying an approach that differs from the typical Bluetooth door keys.

Owners instead will use a specific knock on either their door or smartphone. A WiFi model enables remote access and a way to determine which friends are allowed inside. The knock-and-enter feature is enough of a quirk to set Sesame apart from the pack.

What happens when a nosy neighbor figures out how to open the door by listening in on your special knock? You’d best hope that person has poor rhythm or an inability to recreate your unique series of door taps, else your lock might not be so smart after all.

Rating: 2 out of 5 Open Sesames