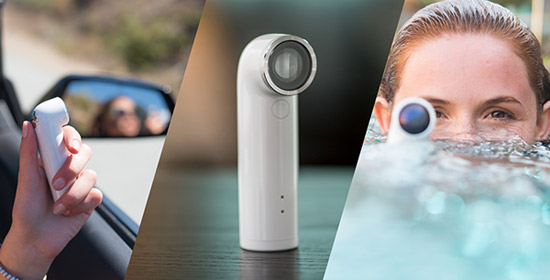 Welcome, friends, to another installment of Gadget Dreams and Nightmares, a trip through the land of delightful and deplorable gizmos.

Among the items to grab my eye this week are portable chargers and espresso makers, a robot hack, a limited-function radio, and a bizarre-looking camera.

Ratings denote how interested I am in using each item, and are not an indicator of quality or how strongly I recommend you spend money on them. (An early tip: Don’t buy the radio thing.)

HTC is stepping so far out of the box with the RE Camera (pictured above), it’s almost as if there was never a box to begin with.

Instead of making us stare through a viewfinder, this minimalist device almost demands a return to older forms of photography, while still taking advantage of modern technology.

It looks like a cross between a periscope and an asthma inhaler, neither of which scream style to anyone who might spot it in your hand. A Lytro this is not.

There are some positives, since it can capture 16-megapixel still images and 1080p video while wirelessly transferring the content to a smartphone. It’s likely to be more comfortable to use for extended periods of time than holding up increasingly larger smartphones to capture, say, a child’s school play performance.

Meanwhile, if one absolutely needs to capture something quickly — for instance, if a crime is taking place — the RE Camera might let one snap photos or start filming more quickly and inconspicuously than a smartphone would.

Yet I don’t really see this taking off. It can’t be easier to use this than to whip out a smartphone and take a quick picture. There’s a companion app that can act as a viewfinder, but that seems somewhat redundant when at that point you could take a photo with your phone.

It’s a poorly timed move, as well, since GoPro just unleashed a range of new cameras, starting at $130. Shelling out $200 for a simple camera that aims to keep smartphones in one’s pocket seems superfluous. Then again, if it stops people from taking photos with their tablets, it might not be such a bad idea.

Rating: 2 Out of 5 Spy Submarines

Carting a two-year-old smartphone around means it’s increasingly unlikely the battery charge lasts a full day. I often have to resort to Airplane Mode to make sure I can get through an afternoon away from home and still be reachable in case of emergencies.

It’s probably time I picked up an external charger, and the fast-charging Pronto looks like a great option.

It might be ideal for traveling, when one’s packing light and only has one adapter. Charge your phone overnight, and the Pronto while getting ready in the morning.

Admittedly, it’s unlikely I should have the need to recharge my iPhone nine times on a city trip, though it could come in immensely useful if I ever find myself on a safari, or have an urgent need to recharge my laptop when no outlets are in sight, thanks to the 12-volt adapter with the higher-end model.

This isn’t so much a gadget as a new way to use an existing one. By combining a Romo robot with a pico projector and a depth sensor, the remote-controlled phone charging station becomes a fully fledged racing game.

I don’t have the space for a miniature train set up and Scalextric, to me, doesn’t seem worth the time and effort in setting up the track relative to the enjoyment I might get out of it.

So this quick fix seems great. It looks like a fun way to spend an hour with friends, and it even has some virtual missiles to fire at friends’ vehicles. This long-time Mario Kart fan is impressed.

Here’s a Kickstarter project that wants to help you focus on a single radio station. The idea is to help people pay more attention to public radio, particularly NPR.

I have a horrendously short attention span, so having only a binary on-off option instead of a multitude of channels to switch might just keep me listening.

However, the design is ridiculous. If I wanted to make tangible use of a Mason jar, I’d head to Brooklyn, where they’re used for just about everything (and where The Public Radio was conceived), or open my kitchen cupboard, where I, er, keep Mason jars as drinking containers. It’s a gimmick, but one perhaps I shouldn’t be criticizing too much.

The only way to tune the radio is to provide the frequency of your choice to the manufacturer, which will lock in the signal before shipping it out to you. That might prove trying when moving to a new city, where radio stations are on completely different frequencies, though I’d likely end up screwing off the radio part so I could add another Mason jar to my collection.

Rating: 2 Out of 5 Brooklynites

Having recently joined the ranks of office workers after several years of working at home, I do find that having a regular caffeine jolt is becoming increasingly vital. Something like the Minipresso could just become an important part of my morning.

The portable espresso machine looks great, and though I’m no coffee snob, I do appreciate the pump-powered froth this promises.

The intensity of a good espresso would be most welcome, especially given the quality of the coffee from the machine at the office. Carting this around for on-the-go espresso seems a breeze, though I would not look forward to cleaning it out after each use.

Rating: 4 Out of 5 Bursts of Energy