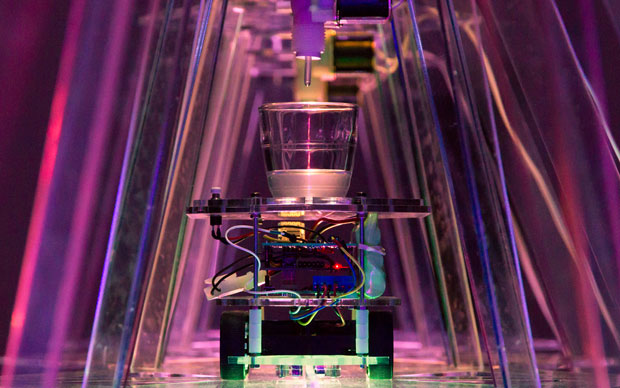 Welcome to Gadget Dreams and Nightmares, the first-look gadget column that indulges in a long, hard gaze at the latest-announced gizmos before deciding to hold them up for all to gape in wonderment or to cast them aside into the wasteland.

Our finds on Mount Gadget this week include a machine that mixes drinks based on your tweets, a 3D-drawing pen for kids, and a smart cube.

These are not reviews, friends, as some of the items are mere prototypes, and I have not laid hands on them. The ratings are a guide only to how much I’d like to try each, and they are not in any way an indicator of the products’ quality.

Sometimes you’ll stumble upon a delectable tweet: a melange of words, pictures, videos or GIFs that looks good enough to eat. But is it good enough to drink?

Data Cocktail is a system that hunts for the latest five tweets that include keywords related to available ingredients, and then will mix a drink based on them.

The machine will print the “recipe” for the crowdsourced drink, just in case it happens to be absurdly delicious, while sending a thank you note to those Twitter users who contributed to the concoction without meaning to.

It’s a prototype, but the creators suggest they could put Data Machine to use at events with custom ingredients and keywords tailored to specific needs or preferences.

This is essentially a compelling data experiment — a way to visualize what the world is talking about in a microcosm. It’s a neat project, which, funnily enough is exactly how I like my drinks: neat. No ice, please, Data Cocktail, and I hope this works: #bourbon #bourbon #bourbon.

Rating: 5 out of 5 Colorful Twists

Whenever there’s a child-friendly technology product that is inexpensive and encourages creativity, I think parents should try to embrace it as much as possible. Adults for a few years have enjoyed the 3Doodler, a 3D-printing pen. Now there’s a version for youngsters.

Users load a plastic strand and the pen melts it, giving the doodler a way to create physical, free-form objects by drawing in the air.

What makes this version more viable for families is that there’s only one temperature option, and it’s unlikely to cause any burns to skin or anything else. That’s thanks to a new type of biodegradable plastic that melts at lower temperatures.

The 3Doodler Start is US$50, half the price of the most recent 3Doodler. There’s a trade-off here, in that there’s only one speed at which the plastic is extruded, but that just means kids will need to be extra cautious when creating their masterpieces.

Certainly, this is one for older children, or at least those who are very carefully supervised, lest you walk into a room to find a kid’s name scrawled in plastic on your expensive couch. It seems a fine way to tease out some of the wackier ideas young ‘uns have while affording them a way to stretch their creativity.

I want one so I can try creating a completely custom, elaborate Rube Goldberg device.

Rating: 3 out of 5 Sky Writings

At this point, we’re more than used to smart bulbs that let us use a smartphone application to adjust their color, switch-on and -off times, and much more. What happens when we take that idea to a new dimension? We get something like the Tittle.

This is a smart cube that has 512 LED lamps with which you can do almost anything you like, apparently. You can, of course, alter the patterns and colors, but there’s a little more to this. It can sync to the beat of the music you’re playing, while you can send emoji to friends, which will appear on their own Tittle in 3D, and create your own animations.

With an 8 x 8 x 8 grid of lights, you won’t be able to play out your own, high-definition 3D animated movie here, but it could afford you the chance to create some neat effects. I’d like to see an open platform (a software development kit is listed as a stretch goal in the crowdfunding campaign) that perhaps could let us visualize data in a rudimentary way — similar to Data Cocktail — or that could sychronize distinctive ways to light up when we receive notifications from various services.

As it stands, it’s a cute toy that has the potential to do something more interesting. I’m hoping for an additional stretch goal that will force the creators to change that abysmal name.