Gadget Ogling: Wine in a Dash, Connected Bicycles, and a Wearable for Behinds 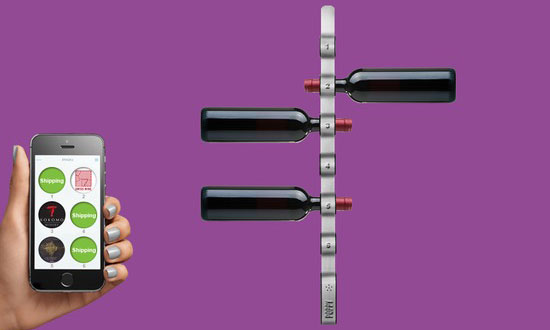 Welcome to the latest edition of Gadget Dreams and Nightmares, where we hunt down the best in newly announced gadgets and allow the more feeble to scamper into the sunset, never to be heard from again.

On our hunting grounds this week are a smart wine rack, bicycle pedals with connectivity, and perhaps the strangest health-tracking wearable I’ve come across.

Note — these are not reviews, because I haven’t laid my hands on any of these items, and the ratings only indicate my interest in trying each.

Make It a Red

I’ll admit I’m not the planet’s most refined wine connoisseur, but I do enjoy a glass or two of red with my dinner.

At the minute, the few bottles I have are vacuuming up space around my kitchen, so I could use a wall-mounted wine rack — but what’s the use of having a rack with no bottles once they’re finished?

Poppy Reserve, which is just a concept at present, could solve the problem of a barren wine rack by tapping into Amazon’s Dash technology.

For the uninitiated, Amazon started a new program a few weeks back that lets consumers simply press a dedicated button for a homeware product about to run out (like paper towels or dog food) in order to have that item shipped immediately.

The idea is that Poppy Reserve would track the level of wine in a given bottle and then ask Amazon to ship more when the supply’s running low. It’s a neat idea — and I’m all for it, given how often I forget the name of a great wine I’ve tried when I need to top up my reserves at the store.

I like that there are temperature and humidity sensors as well, to make sure I’m storing the wine properly. That’s great, because I’d like to drink wine in its most pristine condition.

My only real concern would be when I have some friends over and we empty a few bottles. Odd as it may seem, I just don’t want to feel like my wine rack is judging me.

Rating: 4 out of 5 Large Glasses

There are some things that just don’t need to be connected to the Internet, but bicycles are not one of those.

They’re perhaps the most ubiquitous blend of transport and exercise machine, and if you use one daily, affixing some pedals from Connected Cycle might be the way to go. It’s an activity tracker powered by movement and a theft detection system that alerts owners by notification when their bike has been moved.

Even better, these pedals have their own SIM-enabled connection, so you can track a stolen bike via GPS.

To be completely honest, I’m not overly interested in the activity-tracker aspect. It seems drastically limiting when there are other trackers that can monitor a multitude of activities beyond mere bike riding. But if hopping on your bike is the only workout you get, then great!

The theft detection system is far more compelling, but a savvy thief who spots the distinctive pedals might be aware enough to swap them out as soon as possible. Connected Cycle might be best served to create multiple designs to make them look more like standard manufacturers’ pedals.

Still, that the pedals offer independent connectivity and don’t rely on a smartphone connection is a boon. Not that I’d actually use it, because I’ve never learned how to ride a bike. So, for that reason, and not because the idea itself is poor…

Rating: 0 out of 5 Endless Cycles

Those subscribing to the quantified self movement wish to know as much about their bodies as possible to live a better life. So it was inevitable that we’d someday have a wearable to track how much, er, gas we’re emitting.

Without wishing to cross the line of good taste, CH4 aims to track our flatulence along with our eating habits (through an accompanying smartphone app, of course) and combine the information to help us cut down on food that’s causing those trumps.

Sure, it’s an admirable goal and the aim of all health trackers should be to improve our wellness. But come on — that unmistakable sound awakens the inner kid in all of us. More practically, many vegetables that are otherwise perfectly healthy give us gas, and it’s not completely unnatural to, um, step on a duck.

I think the makers could be pitching CH4 much better. Frame it a little more as a gag gift with good intentions. It’s the ultimate dad gift for a parent with an overactive posterior and some interest in gadgets.

Speaking of which, my dad’s birthday’s coming up. I wouldn’t use CH4 myself, but I know where I might send one.