Last week was a really interesting week. Google brought out its Windows-killer product, the Chrome OS, to generally good reviews — but most of the folks I know who have covered the desktop for years are convinced it will fail. Google also brought out a home automation product and announced a robotic car technology, all of which could benefit from some Apple magic.

Microsoft, not to be left out, bought Skype. Many think Google tricked it into paying way too much, and that Microsoft will quickly kill Skype. I think Google’s didn’t learn enough from Apple before Steve Jobs figured out he was getting ripped off. The cost of that mistake may doom both the Chrome OS and Google’s other efforts. I also think that regardless of what Microsoft paid — and I think it could have bought Skype for less — what it got was a chance to change the world, and that chance is cheap at any price. I’ll get into that this week.

I’ll close with my product of the week: a coming TV set-top box offering from Iomega that looks like it might have more legs than Apple TV.

Google Chrome OS – So Much Promise, So Little Experience

I actually like the idea of the Chrome OS, a thin operating system that lives primarily off the Web and can do local caching of content and apps so you can use it, in a limited fashion, on planes that don’t yet have WiFi. However, the execution leaves me cold — and you’d think that given the lack of success with its tablets, Google would take a different approach.

However, this blog post from a recent ex-Google employee showcases what is likely an endemic problem. Google just don’t understand marketing. There is some irony to this, because the greatest marketing company in the segment — perhaps any segment — is Apple, and Steve Jobs was Google’s mentor for a number of years — or at least until it became clear that Google was ripping him off. It was apparently doing so in an incompetent fashion, though — one, because it clearly got caught; and two, because it clearly didn’t pay attention.

This would be like spending time at the knee of the greatest singer that ever was and not get that the core of success is making beautiful music and not just memorizing words that often rhyme. Google fundamentally doesn’t understand why the iPad is successful, and that is why it is likely to continue to fail with its own tablets and the Chrome OS.

It isn’t that those products don’t have potential; it’s that if you don’t know how to convince people to want them, you’ll end up as another interesting but failed product, like the Sun Ray — or like the Oracle thin client, Google TV, Buzz or Wave.

The Chromebook looks like a notebook but doesn’t have the same function, and if folks look at it like they did netbooks — as a cheap, critically limited offering — they won’t stick with it. There may be an initial wave of sales to folks who chase things that are new and different, but it’s likely to tank.

Also, Google is bringing the product to market incomplete, in that initially the offline capability won’t work. Recall Motorola did this with the Xoom, Microsoft has done this several times — most memorably with Origami and Vista — and it never ends well.

Apple made the iPad successful because it got folks to see it for what it did rather than what it didn’t do. Had they seen it as a crippled notebook without a keyboard — instead of seeing at something magical — it wouldn’t have sold well at all. Both images could fit the iPad. Apple’s excellent marketing, which is designed in the product, is what made the difference.

This carries over to Google’s smart home offering, [email protected], and its driverless car, both of which were also announced last week.

The industry has been working on the idea of a smart home for decades, and many of us got our first big look with X-10 in the early 70s. This means there is a lot of related IP out there in the hands of companies both in and out of this market. Google should have bought one, or this effort will likely become the litigation magnet that Android is. You know, smart companies learn from other’s mistakes — but Google doesn’t seem to even learn from its own.

On creating a driverless car, this could be really cool until you think about what Google would likely do with the information it would capture on your driving. Privacy concerns alone could kill this effort, and the fact that Google has been putting these things on the road without DoT or DMV approval in California (I’m so happy they are moving this test to Nevada) is whacked. One accident, and the penalties could set financial records. I admire risk-taking but not with my life, the lives of other folks on the freeways, or the continued existence of the company.

I actually think Google has a great deal of potential to change the technology world with what it is attempting in all of these products. But if it doesn’t get a hell of a lot better with its approach, all it is really likely to change are the incomes of a huge number of attorneys. Were I Google, I’d shoot for another goal.

Speaking of risks, paying $8.5B for Skype was a huge risk for Microsoft, particularly since it was likely it was being played by Google or Silverlake Partners, both of which are famous for this. However, the opportunity is also huge.

The market has been trying to converge telecom with technology since the 1960s, and in the 1980s, both IBM and AT&T failed spectacularly at this attempt. Still, if we can blend the two, things like video conferencing move mainstream, and we can integrate all forms of communication into a single client.

This goes beyond flat-rate everything and promises a level of interaction we currently can’t execute on out of labs, because the phone and data services come from different providers. However, if one company can provide a comprehensive VoIP and data solution — say someone as powerful as Microsoft — this would change. It could well begin the next major computing wave and redefine cloud communication services.

Given everyone has to communicate, the impact could be massive and redefine the technology industry, placing the U.S. and Microsoft at the center again.

At the beginning, Microsoft paid more than it could afford for DOS, and it built a company on that investment. This time, it paid more than Skype was currently worth. But combined with what Microsoft has in terms of voice/data convergence technology, it may be the missing link that catapults the company — and us — into a new communications age. Granted, the carriers will have something negative to say about this, but opportunities like this are seldom, and sometimes you have to take a leap of faith.

Both Microsoft and Google have huge challenges in front of them. Google really, really, really needs to start channeling what it stole from Apple or it is going to become a technology joke. If you don’t understand how to create demand for what you build, you can’t possibly have the kind of cyclical success that Apple enjoys, which means you assure your own failure.

For Microsoft, it just took a big “bet the company” bet. The amount it paid assures that Skype will get the focus it needs, but Microsoft will have to execute at a level that would challenge Bill Gates. If it succeeds, it will mean a new age for Microsoft. If it fails, it will likely mean a new CEO.

Product of the Week: Iomega TV

AppleTV was one of the few products from Apple that Steve Jobs clearly didn’t back, and that is likely because he really believes the TV is for idiots and resisted owning one.

Apparently, Google doesn’t watch TV that much either, because Google TV was crap when it launched — mostly because it was incomplete — and is going through a complete redesign as a result. 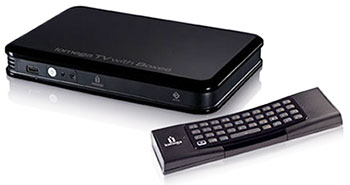 The Iomega TV (Iomega is a subsidiary of EMC) looks interesting because it both feels more complete and is more useful than the other offerings.

It uses the Boxee service, which is similar to Google TV but with a better library (it has the Netflix client for instance), coupled with a built-in NAS capability. You can put your own video and audio content in the box and stream it to any DLNA-compliant receiver or TV. (There are two versions — with one, you add your own drives; the other ships with 2 terabytes.)

Because the Iomega TV showcases what both Apple and Google should have likely done with their own TV devices, it is my product of the week, and it should actually ship in a few months. I’m a big believer in shipping it right rather than shipping it fast.