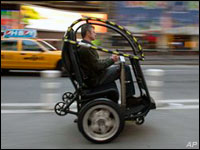 A funny thing happened to visitors to the New York Auto Show on Tuesday — they got to see a concept electric car created jointly by two companies: Segway and General Motors.

The prototype vehicle, named “Project PUMA” (Personal Urban Mobility and Accessibility), is an electrically powered two-seater with two wheels that can travel up to 35 miles between recharges.

It basically consists of two Segway PTs (Personal Transporters) in a chassis with a transparent shield covering the top and front, and an electric drive and batteries from GM.

Like the Mercedes Smart ForTwo, which debuted in 2001, the PUMA prototype seeks to relieve the burden of traffic in cities.

The Project PUMA prototype can travel at speeds of up to 35 miles an hour, according to GM. It reportedly weighs about 300 pounds.

The vehicle can connect its drivers to friends and family and costs one-quarter to one-third as much as today’s automobiles to own and operate, GM claims, though the company did not state which class of automobile it is using as a basis for that comparison.

GM and Segway did not respond to requests for comment by press time.

The Segway PT is a two-wheeled electric vehicle invented by Dean Kamen and unveiled in 2001. Its base has built-in gyroscopic sensors and motors that keep it upright when it is powered on. Think of it as an electric scooter of sorts, with built-in self-balancing capabilities.

When the device tilts, the gyroscopic sensors send messages to motors driving the wheels, which then bring the PT back into balance. Steering the vehicle is easy — users lean forward to go forward, lean backward to go in reverse, and turn by leaning on a handlebar to the left or right.

The Segway can reach speeds of up to about 12 miles an hour.

Building on the Past

The PUMA prototype is the second GM and Segway partnership. In January, they debuted the Saturn Flextreme concept car.

The Flextreme has a range of 34 miles between charges and incorporates technologies such as cameras that replace side-view mirrors.

Unlike the PUMA prototype, however, the Saturn Flextreme can be recharged in three hours from a household outlet. It also has a 1.3-liter turbocharged diesel engine that generates more electricity to both recharge the battery and extend its range.

It’s not yet clear whether or not Project PUMA vehicles will use the E-Flex technology.

All Madness, No Method?

With GM trembling on the brink of bankruptcy, can electric cars help it at all? It’s a shaky proposition — the Obama administration’s automotive task force says that GM is at least one generation behind Toyota on advanced, green power train development. The all-electric Chevy Volt, which GM spent heavily on developing, may have too high a sticker price for too many consumers, according to the task force.

GM is wasting its time with Project PUMA, according to auto analyst Robert Farago, publisher of the hard-hitting automobile review site TTAC.com.

“It’s just a distraction for them,” he told TechNewsWorld. “They’re 50 days away from bankruptcy and need to make a mainstream automobile people will buy, and they need to make it at a profit. There is no redeeming value to this vehicle whatsoever.”

So why would GM bother to take part in the PUMA project?

“They must be out of touch,” he told TechNewsWorld. “You can’t attach any fundamental thought process to it, other than it’s a publicity stunt.”