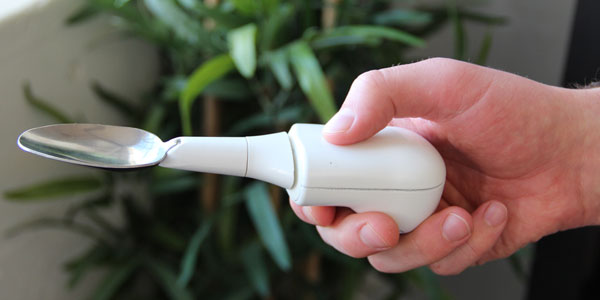 Google has purchased Lift Labs, which produces battery-operated utensils that make it easier for people with essential tremor or Parkinson’s disease to eat their meals.

Parkinson’s patients’ hands shake, making it difficult for them to eat or drink. Lift Labs’ products, offered under the “Liftware” name, cancel more than 70 percent of tremors.

“There’s a lot going on right now in technology-centric innovation in Parkinson’s, including items such as clinical activity trackers and technology better enabling patients to communicate when that has become a problem for them,” said Daniel Ruppar, healthcare and life sciences research director at Frost & Sullivan.

Lift Labs is “excited to be a part of Google,” Lift spokesperson Michael Magdaleno told TechNewsWorld.

Lift Labs offers a standard spoon, a soup spoon and a fork. They have sensors to detect tremors and can distinguish between hand tremors and other types of motion.

Proprietary algorithms running on an on-board computer in the handles fire off miniature motors to move the utensil in the opposite direction of a tremor, canceling it out.

Lift Labs is working on other products, including personal hygiene tools, makeup applicators, and attachments that will let users engage in hobbies such as handcrafts and painting.

Liftware comes with a battery that’s recharged by connecting the Liftware charging cradle to a powered USB port using the cable provided, or by plugging the cable into a computer or a smartphone USB wall adapter. It is designed to last for three to six meals on one charge.

Lift Labs provides a limited one-year warranty within the United States from the date of sale.

The Liftware handle is not waterproof so should not be submerged in water.

Liftware was developed with grants from the U.S. National Institutes of Health.

Pricing and Other Details

Liftware doesn’t come cheap: The stabilizer with an everyday spoon attachment costs US$295. That works out to 27 cents per meal for the first year; after that, the device has paid for itself, Lift Labs pointed out.

Shipping is free within the United States; the company charges for shipments to Canada, Europe, Australia and some other countries. Overseas customers are responsible for fees, taxes and duties.

Lift Labs also accepts donations, which it matches dollar for dollar, to provide Liftware to Parkinson’s sufferers undergoing economic hardship. It has donated 140 devices so far through national foundations.

Liftware can help people who have hand tremors that make eating difficult. However, for those whose tremors do not interfere with eating, or for Parkinson’s patients who don’t have hand tremors, the devices are of no use.

Liftware will not provide significant benefit for people who spill only rarely when using utensils to bring food to their mouths, or for people with large amplitude or severe tremors, or dystonia.

Going With the Big G

Now that Google has purchased Liftware, its direction may shift.

The purchase “could help in broader aspects of disease understanding in the neurodegenerative disorder field, which aligns to areas invested by Google Ventures, such as iPierian,” Frost’s Ruppar told TechNewsWorld.

Google’s purchase “could spur more interest in competitive approaches given their tiering, but I wouldn’t expect an explosion of tech-based utensils,” he said.

Still, “it’s important in this disease area for the marketplace to continue to develop, innovate and seek options for patients,” Ruppar maintained, “leveraging technology — including hardware and mHealth — rather than drug-based options, which are, as of now, not a cure.”