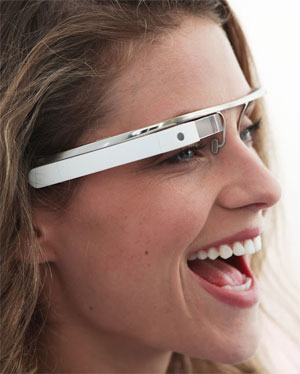 Augmented reality is a live, direct or indirect view of a physical environment that’s augmented by computer-generated input such as sound, video, graphics or GPS data.

Work on the AR glasses is proceeding as Project Glass, which is part of the Google X Lab, a facility run by Google said to be somewhere in California’s Bay Area where about 100 leading-edge projects are reportedly being undertaken.

The scientists behind Project Glass are Babak Parviz, Steve Lee and Sebastian Thrun. They asked for viewer feedback on a video they posted on YouTube.

Through the Looking Glass

The video is shot from the point of view of someone wearing a pair of AR glasses. The wearer can apparently take a phone call while wearing the glasses, listening and speaking with the caller, whose avatar or photo pops up on one lens of the glasses.

The wearer can also transmit what he or she sees during the conversation. For example, looking out of the window triggers data about the weather that’s shown on the lens.

Looking at objects while walking pulls up information on the lens. For example, when the wearer passes a subway station, a notice that service had been suspended is called up a Google Map showing a walking route.

A Siri-like voice application puts up information in response to questions. For example, when the user walked into a bookstore and asked where the music section was, a map indicating that section came up on the lens.

The user can also instruct the glasses to take a photo.

“We plan to share a lot more details as we continue to work on this project,” Google spokesperson Katelin Todhunter-Gerberg told TechNewsWorld. However, “our only on-the-record statement is in the Google+ post.”

Babak Parviz, from the Project Glass Team, is an associate professor of electrical engineering at the University of Washington who has been working on bionic contact lenses that could wirelessly stream information across their surface, much like the AR glasses.

He led a team that created a prototype contact lens that contained a single pixel of information as a proof of concept. The lens has an antenna to draw power from an external source. An integrated circuit in the lens stores this energy and transfers it to a transparent sapphire chip containing one blue LED.

Another member of the Project Glass team, Sebastian Thrun, is a Google Fellow and a part-time research professor of computer science at Stanford University. He was formerly the director of the Stanford Artificial Intelligence Laboratory and led the development of the Google self-driving car.

My AR Glasses Cup Runneth Over

“The question is whether [AR glasses] will initially be more helpful or more annoying,” Rob Enderle, principal analyst at the Enderle Group, told TechNewsWorld.

“Let’s say you are driving, and just before the guy in front of you hits his brakes a note pops up warning you of traffic ahead so you don’t actually see his brake lights in time,” he said. “In that instance, the glasses will become a huge liability.”

However, if the glasses work, Enderle will use them. “They would alert me to things I want to know and likely otherwise would miss,” he explained. “And they’d be very handy in navigation, particularly while walking or on a bike.”

Google will have to work out some knots in its idea first in order to have the glasses accepted by the general public.

“Putting something over someone’s eyes to create a new human/machine interface is fascinating, but given how much we use our eyes, it doesn’t come without risk,” Enderle pointed out.

“This is like the 3D TV thing all over again,” Maribel Lopez, principal analyst at Lopez Research, told TechNewsWorld. “Nobody wants to buy 3D TV because nobody wants to wear the dorky glasses.”

Further, it’s not likely that people whose vision doesn’t require correcting would want to wear AR glasses, Lopez pointed out. “It’s got to be something that’s integrated into your normal routine, like cycling glasses for when you’re going to ride your bike, and not a stretch.”