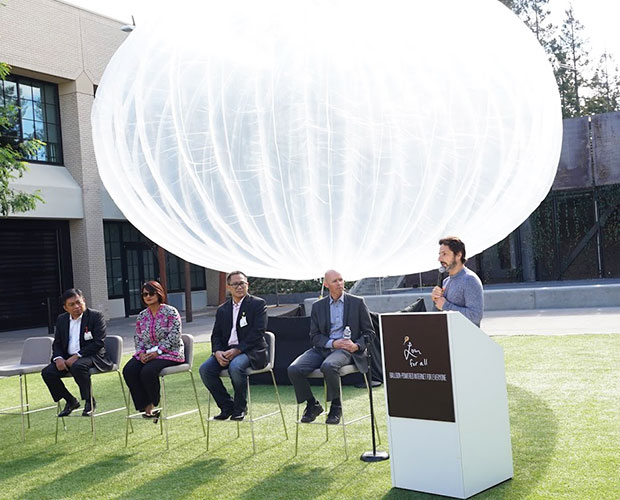 Project Loon, part of Google’s parent company, Alphabet, on Wednesday announced that it has signed agreements with three mobile network operators in Indonesia — Indosat, Telkomse, and XL Axiata — to begin tests of its balloon-powered Internet service in 2016.

Only about one in three of Indonesia’s 250 million residents is connected to the Internet. Project Loon will transmit signals from areas connected to an Internet ground station across several balloons in the stratosphere and back down to areas without access.

The project so far has wirelessly transferred data between balloons more than 100 km apart. Its long-range plan is to provide a continuous ring of connectivity around the globe in partnership with mobile network operators.

Each balloon supports a gondola carrying solar-powered electronics. It establishes a radio link from a telecom network on the ground and beams down LTE Internet access to areas without coverage.

Up, Up and Away

Reactions to Project Loon’s Google+ post on the expansion generally were positive.

“This is brilliant. I, in Indonesia, hope this test can have a good result,” wrote Satrio AD.

Residents of other countries, both in the region and elsewhere, also applauded the move.

“I’m super excited for this,” posted Aaron Scheiwiller, who also asked whether the company would include Project Fi “so that a customer of Google’s wireless network would have Internet wherever your balloons are.”

“Keen to test it out — if we are covered here,” said software developer Floris Coetzee, referring to Africa.

More than 17,500 islands make up the Indonesian archipelago; about half, or 8,800, are named, and 922 of those named are permanently inhabited.

“Loon has the potential to help telcos bring Internet connectivity to tens of millions of unconnected people in Indonesia, because it can deliver broad coverage without the difficulties created by mountains, water and jungles,” spokesperson Veronica Navarrete told TechNewsWorld.

It’s far from certain whether Loon’s full potential will be realized, however.

“With the recent failure of the military-tethered blimp, which took out a lot of power lines, you’d think they’d want to rethink this,” commented Rob Enderle, principal analyst at the Enderle Group.

Still, balloons are a cheap way to provide Internet access, he told TechNewsWorld, and whileProject Fi is available only in the U.S., something similar eventually could be tied to Project Loon.

Project Loon likely will share revenues with the telcos for each new customer who signs up using it to access the Web, suggested Guang Yang, an analyst atStrategy Analytics, in a research report.

“Affordable ubiquitous broadband connectivity is the great vision of the global [information and communications technologies] industry and many national governments,” he pointed out.

The gap between global demand for broadband and availability of coverage and capacity “creates future growth potential for the industry,” Yang noted. However, some countries may not want their citizens to have unrestricted access to the Web, and that could pose a problem for Project Loon.