Google Opens Faster Big Data Pipe Between US and Japan 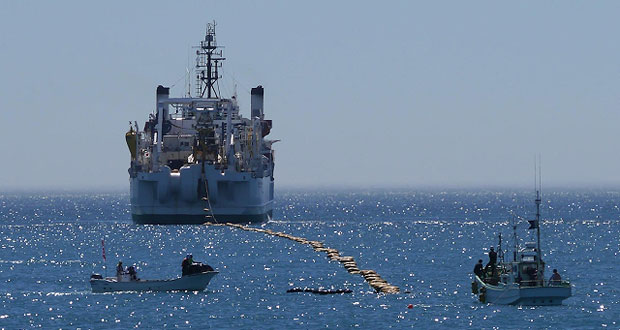 Google on Wednesday unveiled its latest investment in long-haul undersea fiber optic cabling. Dubbed the “Faster Cable System,” it is the highest-capacity undersea cable built to date, providing 60-Tbps (terabits per second) bandwidth between the United States and Japan.

It is about 10 million times faster than an average cable modem, Google noted.

Google is one of six members of the Faster Consortium, which officially announced the development of the cable in 2014. Google has sole access to the pair of 100Gb/s x 100 wavelength optical transmission strands that run between Oregon and mainland Japan. One is used for the sending data, while the other is for receiving.

The total investment in the Faster system reportedly approximated US$300 million.

Faster will be used to support Google users, including Google Apps and Cloud Platform customers, said Alan Chin-Lun Cheung of Google’s submarine networking infrastructure group. Google will have access to up 10Tbps of the cable’s total capacity. It will use the bandwidth to support its newly announced Google Cloud Platform East region in Tokyo, which is set to launch later this year.

The dedicated bandwidth that Faster can provide will ensure quicker data transfers, along with reduced latency, for GCP customers worldwide.

Faster is just one of Google’s recent efforts to further develop the global Internet infrastructure. Google’s investment in undersea cable systems began in 2008 with the 7.68Tb trans-Pacific Unity cable that went online in 2010. With Faster, Google now has a total of four undersea cables and plans to develop even more.

Other companies joined Google in the creation of the Faster Cable System, including China Mobile International, China Telecom Global, Global Transit, KDDI and SingTel. NEC Corporation supplied the systems that are required to run data through it.

Google and its Faster partners are not the only ones developing advanced undersea cables. Microsoft and Facebook last month announced a joint effort to build a new undersea cable across the Atlantic. The “Marea” system — Spanish for “Tide” — will offer speeds of 160Tbs. Construction on that cable will begin later this year.

The Faster cable system will provide expanded bandwidth, along with redundancy, to the seismically sensitive East Asia region, but it offers many other benefits as well.

“This is all about the expansion of Google’s network to provide services to other regions,” said Jim McGregor, principal analyst at Tirias Research.

“Google is just one of several investors in the cable, and is taking one-sixth of the capacity — 10 terabits per second out of a total of 60 Tbps,” noted Stephen Blum, principal analyst at Tellus Venture Associates.

The sea — rather than the sky — may be the limit when it comes to data delivery. That said, given that Google only has control over one-sixth of the Faster cable’s bandwidth, that does put a cap on how much data it can transmit — and today’s big data will grow ever bigger.

“Ten terabits per second is a lot of capacity, but it’s consistent with Google’s current bandwidth consumption,” Blum told TechNewsWorld.

Because tech companies need to transport so much data around the world, it makes sense for them to invest in the infrastructure, and cable still has advantages over other technologies when crossing the seas.

“Major Web services companies — like Google, Facebook and Microsoft — are investing in transoceanic cables, as well as domestic fiber capacity, because their internal data transport needs are on the same scale as major telecoms companies,” Blum pointed out.

“In fact, the distinction is becoming increasingly irrelevant. When you send a message via Gmail or respond to a Facebook post from the other side of the world, it’s transported primarily on internal networks,” he said.

With so much data traveling around the world, it now makes economic sense for the large tech companies to build their own infrastructure.

“It’s simple vertical integration, so when a company’s needs to scale up to a certain point, it makes economic sense to own a resource rather than buy it,” said Blum.

“It’s no different than car companies that made their own steel a hundred years ago,” he added.

There could be other benefits as well.

“Having its own dedicated network could improve security by reducing the number of hand-offs between networks,” Tirias’ McGregor told TechNewsWorld, “but the project is really about Google network reach and global expansion.”