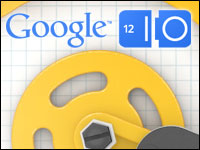 It used to be that technology companies would head to one or more of the plethora of industry trade shows to introduce new products and showcase their latest offerings. But in recent years many large companies have forgone the shows and instead have offered company-specific conferences and events.

This week Google might have raised the bar for what attendees — specifically those in the media and development communities — expect from such events. The Web giant appeared to be in top form at its I/O developer conference held this week in San Francisco. Google unveiled new products and offered technical presentations — and it went one better than any Apple event to date.

It had a skydiving spectacle, which drew at least as much attention as some of the products.

“The skydiving and Google Glass demonstration were definitely exciting,” said Greg Sterling of Sterling Market Intelligence. “And the developer reaction to the event was enthusiastic. It’s also the case that Google gives away hundreds of dollars worth of products, which everyone likes.”

Of course, any product could have been used in the same demonstration.

“While over the top, the tablet was really only half working during the freefall demo,” Jeremiah Owyang, industry analyst for the Altimeter Group, told TechNewsWorld. “You don’t need a Google Glass product to do that. You could use a GoPro camera.”

However, this presentation was big, and whether another product could have been used, it was Google that did it.

“Absolutely, the gamesmanship with that demo stunt surpasses the showmanship that even Steve Jobs had,” Owyang added. “Other companies will have to up their game to the point that someone will have to jump out of a spaceship.”

It must be remembered that the show is just the show, and at the end of the day the attendees want to see products. Google apparently knew how to give them the right mix of both.

While it is likely only some of those will take hold, the Nexus Q is one example that likely won’t go anywhere without a price cut and retail distribution, he suggested.

“The Nexus 7 — though very nice — may also have a limited market without retail distribution,” Sterling told TechNewsWorld.

What was also notable about the I/O conference was that it reaffirmed that Google has serious capabilities that extend well beyond its search prowess and browser development.

“This is a company that’s shifting from one known for search to a broader consumer electronics company,” emphasized Owyang. “They launched a bunch of physical consumer products and that is very different from being stuck in browser mode only. This allows Google to compete against retailers such as Amazon and hardware makers such as Sony.”

Of course, a developer conference is a captive audience of fans who will cheer and support every announcement. The next step is seeing how these products fare with ordinary consumers.

“The Chrome box may have enterprise appeal, but it won’t have any appeal to consumers,” said Sterling. “So a year from now we’ll see a mixed track record, in all likelihood, for many of these products. However, Google’s core franchise such as search and advertising, is very healthy, and some of the mobile upgrades in Jelly Bean will ensure that it remains very competitive with the iPhone.”

On With the Show

It won’t hurt that Google did impress the audience — and while it is unlikely Apple will actually have anyone jump out of a spaceship, this event will certainly goad its competitors to bring their own A game.

“I think the design and profile of this event — meaning everything from its splashy theatricality to the ‘wow” factor of the Nexus 7 to the developer-centric elements of the Nexus Q — suggests that Google has taken several major steps forward in messaging maturity,” said Charles King, principal analyst for Pund-It.

“You can attribute this to the return of Sergey Brin,” he said. “That actually seems fair since the company never did anything remotely like this under Eric Schmidt. But it also serves notice to Apple and others.”

This could prove important for Google, as it also proves that it fully — or perhaps finally — understands how crucial it is to craft individual messages for critical audiences.

“That’s something every successful company does as a matter of course,” added King. “But it’s another sign of maturity which demonstrates that Google is more of a force to be reckoned with than ever before.”

And how does Google compare to Apple? Is it fair to say that post-Jobs, Apple is looking somewhat sedate?

“Only if you believe that these events need to have splashy PR stunts,” quipped Sterling.

Nor would he say that Apple is losing its edge — “but the splash definitely helps the buzz around Google’s brand.”