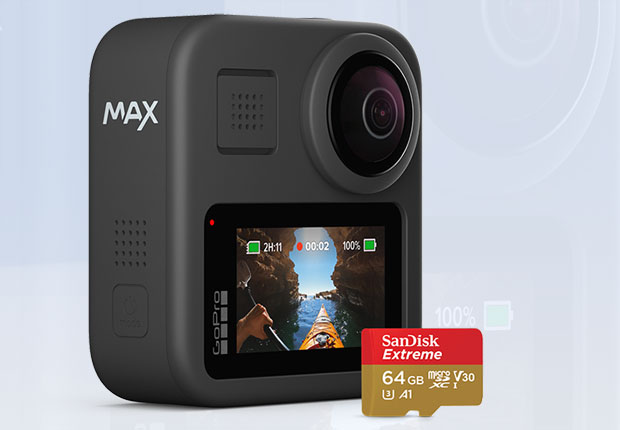 GoPro has begun taking preorders for its US$500 360-degree camera, the Max 360, and reviewers have begun to weigh in on the latest entry in the action camera company’s line.

“GoPro has become a household name for its durable, portable little action cameras and the Max is no different. While the camera has a lot of great features, it was the ease of the app experience that ultimately made me want to keep using this,” wrote Becca Farsac for The Verge.

“In the past, 360-degree footage meant high-end equipment and headaches in post, and that always pushed me away from using it,” she continued. “But when put in the same form factor and app as a GoPro Hero, a workflow I have been using for years, it’s way more approachable.”

The new camera has two 180-degree lenses that can capture 360-degree stills at 16.6 megapixels, single lens shots with a 4:3 aspect ratio at 5.5 megapixels, and arresting 270-degree “PowerPanos” at 6.2 megapixels.

There are microphones on all sides of the camera, save one, and it supports all current GoPro accessories.

“GoPro wanted to make a 360-degree camera that regular people might want, and in that regard, it’s succeeded,” wrote James Trew for Engadget.

“The lower price point, the added flexibility of Hero mode, and improved stabilization definitely mean Max is a capable camera whatever action you’re shooting,” he continued.

“But there are still some inherent turn offs when dealing with 360 video, and the hardware’s more unwieldy than a regular action camera,” Trew noted. “The result is a specialty device that will appeal more to creatives than the average outdoor type.”

Trew cautioned action-cam shoppers who might be attracted to some of the Max 360’s advanced features but who would be using it primarily as a conventional GoPro camera in “Hero” mode.

“If you primarily want to use Max as a regular action camera with some 360 capture perks, then you’ll need to think long and hard about whether you need 4K, slow motion or any of the night modes,” he wrote.

“These might be less razzle-dazzle than a 180-degree rotating pan,” Trew continued, “but they’re much more important to a lot of general users.”

The Max 360 has some clever features that can be appreciated without a 360-degree view, according to Stan Horaczek, writing for Popular Photography.

One such feature is Reframe. It lets you focus on a single element of a scene, perform a super zoom out, and then zoom back on another element in the scene.

“It’s a cool effect that’s meant to play on a typical screen, but would be nearly impossible with a traditional camera,” Horaczek wrote.

“GoPro has also hedged the camera’s dependence on 360 video for its overall success. If you just want to use it as a typical action camera with the company’s really excellent image stabilization tech, you can do so,” he added.

“The directional microphones it uses to create 3D audio (which is also largely a novelty for the moment) make it useful for vloggers who want to simulate the effect of an attached shotgun microphone,” Horaczek continued. “It reduces external noise and even environmental sound which can easily turn into an annoying roar in your footage.”

The Max’s sound is a big plus for the camera, noted The Verge’s Farsace.

“The Max’s audio capture … is the best I have heard from a consumer 360 camera,” she wrote. “The wind reduction can add a lot of compression, but overall it actually reduces the sound of wind while keeping voices intact. I tested the camera in 25 mph winds and you could still hear me speaking.”

It’s better not to think of the Max 360 as a 360-degree camera, wrote Joshua Goldman for Cnet.

“The Max’s dual cameras can be used to capture 360-degree videos and photos, but more importantly, you can use its app to turn that 360-degree video into standard widescreen clips while also easily reframing to whatever subject you want to focus on,” he wrote.

“Since you’re capturing the whole scene, you can basically create the look of multiple camera angles without moving the Max from a single position,” Goldman continued.

Along with other reviewers, Goldman praised the Max 360’s “insane” horizontal-leveling feature.

“The camera can rotate upside down to right-side up, around and around, and you’d never know from looking at the horizon,” he noted.

“The Max feels like more of a work in progress than the Hero 8 Black, so I would expect new capabilities to roll out eventually,” Goldman wrote.

It makes sense for GoPro to build a 360-degree camera, even though watching 360-degree video is limited to virtual reality hardware, observed Rob Enderle, principal analyst at the Enderle Group, an advisory services firm in Bend, Oregon.

“GoPro doesn’t want to have somebody move in and dominate that space. It makes sense to release something like this to establish a beachhead in the market,” he told TechNewsWorld. “They’re the dominant player in the sports camera market, so it makes sense for them to preserve any emerging market.”

Emerging markets will be important for GoPro’s future. Although it has long enjoyed immunity from the threat smartphones posed to traditional camera makers, that’s no longer the case for GoPro.

“One of the ways GoPro avoided the drag on the standalone camera market by smartphones was by making rugged cameras that could be used in harsh conditions,” explained Ross Rubin, principal analyst at Reticle Research, a consumer technology advisory firm in New York City.

“Now smartphones are becoming better at surviving weather, and Motorola is even marketing a smartphone that’s a an alternative to an action camera,” he told TechNewsWorld.

What kind of emerging market will the 360-camera market be?

“There’s undoubtedly a crowd to which the Max will definitely appeal. 270-degree panos? Barrel-rolling videos just because you can? Tiny planet to extreme close up? These are all things that are begging to be experimented with,” wrote Engadget’s Trew.

“I can really see some people pulling out mindblowing shots from this that simply are not possible on a regular sports camera,” he continued. “If you have a creative or experimental mind, Max is going to feed your curious side for sure.”

Will the Max 360 be a novelty that ends up in the tech bin in my basement? wondered The Verge’s Farsace.

“I’m not entirely sure,” she wrote. “But it’s the most fun and user-friendly 360 camera I have used to date and I’m excited to see where GoPro takes this line in the future.”