This statement is accompanied by many other statements and research which show that year over year, the amount of Internet traffic has grown and will continue to grow. These trends are facilitated by the continuous growth of smartphone usage and the recent introduction of the iPad.

This growth in Internet traffic means that most websites today are expected to see more traffic and more users coming into their data centers and networks than they currently serve. While this is great for business, many data centers are not designed to effectively manage this ongoing growth in traffic usage. This is due to two main facts: 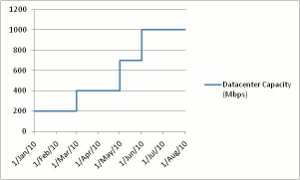 An example of the data center lifecycle can be seen in Figure 1.

While the graded approach to data center design is more straightforward from an architecture point of view, it has two main drawbacks which derive from the fact that traffic patterns do not follow such graded trends, but rather can be high or low at any moment in time, like a sine wave (see Figure 2). 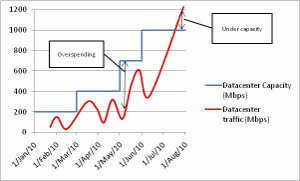 Overspending will occur whenever the network infrastructure has more capacity than what is actually needed. However, the second drawback is worse, since being under capacity means there are not enough resources to manage all users, which means loss of business.

It is clear that a different type of data center network design is needed, one which will be elastic and dynamic enough to follow the requirements of actual usage, rather than future usage.

Note: for this approach to work, the data center network should implement server virtualization technologies to replace the physical architecture (where needed), since it is much easier to provision virtual server resources than physical server resources. 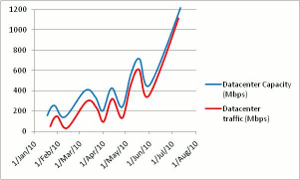 As can be seen, the aforementioned layer of capabilities allow for automatic adaptation of the changes in either the application performance or virtual infrastructure. If needed, they can also scale the application delivery infrastructure itself, thus ensuring the data center network continuously provides the exact capacity needed to serve applications and users at each point in time. An example of such a data center network can be seen in Figure 3.

To summarize, as Internet traffic levels continue to grow, an increasing number of websites will start facing the need to be able to easily accommodate the number of users and traffic accessing their networks.

Only by implementing a smart, flexible and adaptive application delivery infrastructure will that be able to be easily and cost effectively accomplished.

Amir Peles is CTO of Radware.
Get Permission to License or Reproduce this Article