Bicycles have seen much in the way of technological advancement in the past 150 years, and that was widely apparent on the show floor at the annual Interbike trade show in Las Vegas this week.

The modern face of cycling was clearly visible in the electric-assist motors that make bicycles an optimal alternative vehicle for commuting, the space-age carbon fiber frames that aren’t limited just to the high end — and even the GPS-enabled cycling computers that can track calories, distance and power output, for example. However, the biggest technological leap of all at this year’s Interbike could be seen in the recent developments in training aids. With cooler weather and shorter days on the way for many, more than a few cyclists will head indoors; fortunately, with new technologies, the outdoors can too — at least virtually.

Kinetic Trainers is now using dongles that attach to its line of indoor trainers. The inRide system of pod mounts can even be retrofitted to oldermodels. Either way, a user has only to put a bike on the trainer and start spinning.

The Pod Mount tracks the rider’s progress; via a tablet display, it can provide data such as calories burned, distance traveled and power output. It can also provide a simulated course to help keep ridersmotivated while riding a stationary bike. 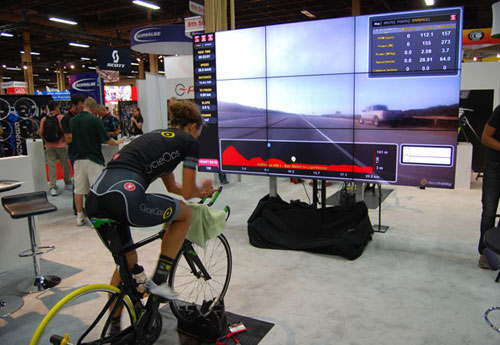 Saris lets riders feel like they’re on the open road through connectivity to display technology including an HDTV.

Kinetic’s technology is compatible with third-party software including Strava and MapMyFitness.

“We see this as something for anyone who is looking to track their progress during the off-season,” Jason Overman, a spokesperson for Kinetic, told TechNewsWorld. “The fact that this is app-based also makes it affordable.”

Saris, which also makes a line of bicycle trainers and stationary bikes, provides even greater immersion through its Power Beam technology, which aims to give riders the feeling of being on the open road through connectivity to display technology including an HDTV.

“This is for those who want to continue to get the feeling of riding outside during bad weather,” Matt Waite, product marketing coordinator for Saris, told TechNewsWorld. “Plus, this allows for rides virtually anywhere in the world.”

Thanks to helmet-mounted cameras such as the GoPro, users of many of these virtual trainers are now able to record their rides during the regular cycling season and continue to enjoy them even when theweather outside is frightful.

“While we have offered some routes, most of what is available comes from other users,” Waite added. “The best part of this is that it is possible to ride courses virtually that would be impossible to ride inreal life, including those across the world.”

The Saris technology is also based on two-way communication, so that efforts on the bike actually determine the speed that the video is played back. This makes it much more than watching pre-rendered or pre-recorded footage. In addition, the terrain can impact the resistance offered by the trainer.

“The computer receives the information on the route, so if you are going uphill on the screen, the trainer increases the resistance,” Waite explained.

Peloton, meanwhile, is taking a very different approach to keeping riders motivated during the off-season. Instead of providing scenic views of the road, it offers a real-time and on-demand spin class with its at-home exercise bikes.

“We’ll be streaming live classes from our Soho studio every hour,” Peloton founder John Foley told TechNewsWorld. “In addition, we’ll be offering rides on demand from previous classes as well as including a global leader board to keep our users motivated.”

Such features will be available to users via a subscription-based service. Fees and availability are still being determined.

The heart of Peloton’s system is an Android-powered display built to be four times the size of a typical iPad tablet. 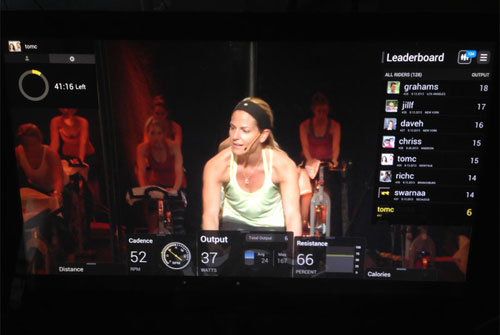 Peloton offers a real-time and on-demand spin class with its at-home exercise bikes.

“We’re looking to include video chat so that you can talk to other users while on the bike,” Foley noted. “Plus, you can track calories, power and distance. Our system is even heart-rate-monitor-compatible thanks to Ant+ connectivity.”

“Although the iPhone and iOS are more restrictive in terms of accessing hardware functions, it is a very consistent development environment, including the interfaces for connecting peripheral sensors — a watt meter, say, or a heart-rate monitor or the output from a piece of gym equipment — and downloading the data to a computer or the cloud,” Blum explained.

“Sports differ in data intensity,” Blum added, “but as a rule, the more solo the training, the more you’ll see athletes relying on mobile phones and peripherals to enhance their training.”