How Amazon and Nokia Are Channeling Jobs to Unseat Apple

The top technology company of the 80s was IBM, 90s was Microsoft, last decade Apple. No company made it across more than one decade as the top company and the trend was away from IT (IBM) and toward the consumer/buyer, suggesting that RIM’s refocus on IT is clearly pushing upstream.

What is also interesting is that the 80s’ IBM and last decade’s Apple were vertically integrated companies, while Microsoft’s world was like what founded the industrial revolution — one of specialization and, in this case, outsourced software.

This suggests that we may have a market pendulum that swings from vertical integration to specialization and eventually settles in the middle so the next company of the decade for technology could be a hybrid.

That could be a company that appears more vertically integrated but still uses third parties to complete a major portion of the solution. In contention are Amazon and Nokia, which could be taking a Steve Jobs-like path to glory.

I’ll close with my product of the week: the Nokia 900, which may be the best Windows Phone so far.

How Apple Wins: Own the Solution

My working theory is that the reason Apple is so much more profitable than any other vendor in its space is that it ensures the user experience with solutions that extend well beyond the hardware.

Whether an OEM uses Microsoft or Google, the common practice is to take credit for success and blame these two software suppliers for any problems. In addition, even if the OEMs know that what the supplier is providing isn’t competitive, they seem more willing to point the finger than to actually fix the problem and ensure the result. They do this while complaining they can’t differentiate — which is ironic, given that fixing these holes would allow them to do just that.

Put bluntly, Google and Microsoft licensees focus on blaming Google and Microsoft, while if Apple had a problem, historically, Steve fired everyone who had anything to do with it. That tended to focus folks at Apple on fixing problems — not finding others to blame.

I’ve referred to Microsoft as the 90 percent company in that it does about 90 percent of what needs to be done in order to create a great product. Xbox was one of the few efforts it fully resourced. Even then, once successful, it cut backing so that rather than being massively dominant, which is where it was trending, it simply leads its market. It could have been the iPod of gaming but fell short of that goal.

Google is more like a 70 percent or 80 percent company; it doesn’t seem to believe in marketing with any regularity (the Chrome browser being the exception). In addition, it seems to have this attitude that folks should be happy with what they get, because from Google they get it for free.

Its partners are often buried in litigation, have difficulty with updates (Android phones are rarely updated), and have been largely unsuccessful with tablets.

Amazon and Nokia have apparently figured this out, and their approaches suggest they plan to once again own the user experience but still leverage the specializations provided by Google and Microsoft.

The Kindle Fire, in terms of volume, has been the most successful tablet in market against the iPad. Apple didn’t even really consider it a competitor and so didn’t focus on it.

This was brilliant in two ways. Instead of just — like most — creating an iPad clone, Amazon created a unique window into its services. However, behind these products were three dedicated readers: the original Kindle, the Kindle Touch and the Kindle DX.

The DX is in the iPad’s class size and, according to Amazon, actually has the most loyal user base of all of its users. That base will likely be key when it eventually moves up in size and challenges the iPad more directly.

Amazon took Android and intentionally forked the code, making the platform its own. The user experience with the Kindle Fire is vastly different and much better than with any other Android platform product.

Amazon provides a better movie service than Apple does, comparable music, better connectivity, and a far better online shopping experience in a device that costs less than half as much and is far more portable.

One of its little-known services — because it is only on the Kindle Touch right now — is X-Ray, which provides you with a derived summary of the book you are reading and then a graphical representation of characters/people, and key thoughts throughout the book, so you can find them easily. It’s great for revisiting something you want to find or for getting through material more quickly.

It also has an accessibility plug in for the blind that runs on the PC, plus voice-operated menus, high-contrast reading modes, and a massively improved text-to-speech experience than on the other devices.

Finally, Amazon has been able to subsidize its Kindles by turning them into windows into the Amazon stores. Amazon has found that Fire users are rapidly becoming Amazon addicts, and the economic benefit to Amazon from this is immeasurable.

Nokia, which was once the largest and most powerful phone company in the world, has largely missed the smartphone wave. Its top brass rethought this but clearly saw that working with Android, as most have done, wasn’t going to work. Given its new CEO came out of Microsoft, where those bodies were buried was likely no secret.

So Nokia crafted a unique partnership with Microsoft — one that had at its core a substantial Microsoft investment ensuring that it would focus on the outcome. Then it tightly tied into Microsoft’s development process and reformed what is clearly now more of a virtual entity tying the firms more closely together at the hip.

While the current generation of products, which were under development while these relationships were forming, doesn’t yet showcase the full power of what has been accomplished, the future is looking very interesting.

Nokia has stepped up, much like Amazon and Apple have, to ensure the customer experience. It put a service in the box that works kind of like Apple’s Genius Bar. A rep will call you back to help you set up the phone or address any issues you have with it, and you don’t need to drive into an Apple store to get this done.

The most interesting thing Nokia has done so far is to make every employee part of the solution. Nokia employees are working as a team worldwide to figure out why their products aren’t selling and either addressing the problems or reporting back so they can be addressed. Over time, that kind of heart and focus could allow Nokia to return with a vengeance.

Wrapping Up: Owning the Solution

Both Microsoft and Google platforms have been plagued by a tendency for the folks creating them to focus on blame rather than finding solutions. This is why Apple was able to move past Microsoft and keep Google at arm’s length. But both Amazon and Nokia seem to recognize you can’t win on this path and are starting to emulate Apple where it counts. That isn’t on hardware — it is on taking responsibility for the solution and making customers love it.

Amazon is ahead on this, and it is showcasing this strategy can work. The next wave by both Nokia and Amazon should be very impressive. The lasting lesson is that blaming a partner is the path to failure, doing what it takes to win is the path to success, and the one thing that truly differentiated Steve Jobs was that he did whatever it took to win.

If Nokia and Amazon do whatever it takes to win, maybe they can find that elusive formula to beat Apple — ironically following Steve Jobs’ excellent example.

Product of the Week: Nokia Lumia 900

The Nokia Lumia 900 (currently on pre-order, and I have a preproduction version) is the closest thing to an iPhone-like product using the Windows Phone platform to date.

It is an iconic integrated design that appears to be carved out of one piece of metal. It has a glorious OMLED display, a more advanced technology then the LCD-based iPhone 4’s retinal display but at lower resolution. The iPhone retinal displays are the most advanced LCD lines, but OMLED is the next technology and bridges the colors of LCD with the deep blacks of plasma, resulting in far deeper colors. 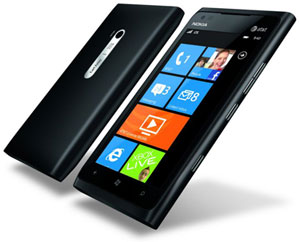 To put a point on this, the first small OMLED TVs were around 15 inches and cost more than the 50-inch LCDs when they came out, and people (a few anyway) still thought the colors were worth it. The display is almost an inch larger, significant in something this small.

Price is initially US$99 with a plan or $100 cheaper than Apple’s cheapest iPhone, which likely explains why it is limited to 16 GB of memory. Even though it has a bigger battery, it gets less battery life. This is because it has that larger screen and is true 4G (LTE) vs. the iPhone’s smaller screen and 3G support. We’ve seen the iPad’s 4G service suck that battery down quickly as well, and 4G — like early 3G — phones are taking a hit.

Apple still leads on number of apps, while Nokia leads on being simple to use, particularly when taking a picture (it has a Carl Zeiss lens on its 8 MP camera). Oh, and the Lumia does support Flash while the iPhone currently doesn’t (at least not natively).

In the end, the Lumia reminds me a bit of how Apple and Palm initially came to market. It is defined by simplicity and focus, and where it leads is tied to that focus. The iPhone does more stuff, thanks to the apps and sharper screen, but historically simplicity has ruled.

Nokia has taken a good initial shot at the iPhone 4S and made a huge improvement over Nokia’s prior offerings; that is why the Nokia Lumia 900 is my product of the week. And, apparently, I’m not the only one who thinks this phone is a player, best for folks who are new to smartphones or don’t like Apple.