How Google Could Murder Your Digital Identity

I’m in the midst of doing the biggest tablet review I’ve ever attempted, and I have to admit I’m rather impressed with a number of the Android offerings. The funny thing is, the ones closest to the phone work the best, suggesting there is a bit of a Windows XP/Vista event going on in this space.

While I was doing this, I was sent a link to a Google customer who got royally screwed when Google effectively gave the death penalty to everything he had stored across Google’s online applications. There is a huge warning here.

I’m going to make the product of the week the best of the Android tablets I was sent, and that’s the Asus Transformer — largely due to the keyboard integration and extra battery (the thing has been running for more than two days unplugged).

Let’s start out with the Google warning. Evidently, Dylan M., who goes by the name “Thomas Monopoly” on Twitter, had a bit of a problem with Google. A long-time supporter, he recently woke up to find Google had pulled the plug on his digital identity.

Now he had pretty much converted everything to Google services. He used its storage (and paid for extra capacity), used its social network, used its email and used its applications. He is a grad student and had more than 500 articles cached for research in his Google reader (gone); he had migrated all of his bookmarks to Google bookmarks (gone); he had consolidated on Google his 200 contacts (gone), his backup files (gone) and his docs (gone).

The guy even put all of his calendar items (doctors’ appointments, meetings, dates) onto Google, and they are now gone. He had used Google Maps extensively, and all of those records are gone. Oh — and it isn’t just access to new items either. His entire mail account and documented history have been deleted.

In effect, and you can read it in his words here, Google wiped his digital life from existence. Google pretty much gave him the digital death penalty, and there was no due process, no warning, and no real explanation.

Now he doesn’t have access to his files, can’t get his email, can’t contact his friends, and is pretty much screwed. Google doesn’t provide someone you can call, and so getting reinstated has been problematic. Actually, a better way of saying this is there is no real appeal process. In effect, he was tried and told about the guilty verdict after his digital identity had been executed — and, apparently, he has no recourse.

I’d put this down as an isolated instance, but there is a great deal of hacking going on at the moment. My own MSN account was hacked a few months back. Someone phished through MSN support and got my password reset and entered that way. Fortunately, MSN has live bodies you can call — otherwise, I would have been as SOL as Dylan.

My point here is that someone hacking into your account could cause you to be terminated by Google depending on what happened — or termination could be a random thing based on a metric Google hasn’t disclosed.

So, word of warning: Until Google puts in place a clear customer service organization to deal with issues like this — and maybe even if it does — make sure you keep a copy of your stuff on your own hardware. This is likely good advice for any online service.

Google really needs to start focusing on customer satisfaction, though. Its current perceived position of “hey, it’s free — take what we give you” isn’t likely going to work in the long term. Just wait till Google screws some senator or billionaire’s kid, or pisses off Anonymous. That’ll be the gift that keeps on giving.

I’m currently reviewing the Asus Transformer, Acer Iconia, Samsung Galaxy 10, Dell 7″ and 5″, and have an iPad 1 and 2 for comparative reference. I was one of the first reviewers of the Motorola Xoom, I’ve kept up on the HP Touchpad reviews, and I was briefed on both the Lenovo IdeaPad and ThinkPad tablets but haven’t tried them myself yet.

My overall take was that the first Honeycomb release, which the Xoom exemplified, was Google repeating Microsoft’s Vista mistake and trying to outshine that company with sloppy work. Honeycomb 3.0 made Vista look good. The 3.01 helped a bit, but the recent 3.1 drop eliminated most of the OS problems.

Ironically, the Dell Streak tablets, which are based on Android 2.2, have been more consistently reliable and more useful than the Honeycomb products. This is because they have access to the full smartphone application set (the Honeycomb products get a vastly smaller number of applications), and that older platform is now comparatively mature (crashes less often).

The products with the most promise for business are the coming Panasonic Toughbook tablet, which has an outdoor viewable screen, and the Lenovo ThinkPad tablet. Both of these have digitizers and were designed to meet a higher quality standard. I should have them to review when they launch later this year, and I think they are worth waiting for.

Overall, the Android products were great for videos (once I figured out how to get videos on them), great for music and browsing the Web, great for light games (“Angry Birds”) and had wonderful all-day battery life. However, productivity apps sucked (no spell checkers in the word-processing apps for instance), and a number of the applications that came with them crashed or simply didn’t work.

Only one, the Lenovo K, ran Netflix — and I couldn’t get it shipped to arrive in time for this review. My sense is these are still generally best for folks who like to tinker. They aren’t where they need to be for a general customer, but they are closer than they were a few months ago.

Based on all of this, I have drawn a few conclusions. One is that the tablet market remains an iPad market for this round. Two, the hardware for the Android products is more than competitive, but the software and services aren’t where they need to be to truly compete with Apple yet. Three, Google needs a tighter focus on customer satisfaction. And four, all of this suggests that Microsoft still has a shot — and my experience with the Dell products clearly shows it could have had one of the top tablets this year if it had offered a Windows Phone 7 tablet. (Currently, Windows Phone 7 has higher customer satisfaction than Android).

Wrapping Up: Google Needs to Step Up

Google shut down its Labs this week to better focus on existing products, and it desperately needs that focus. Part of that focus needs to be on customer satisfaction. It is lagging badly both with Android and with customer protection, as poor Dylan pointed out, for its services.

The massive legal challenges, issues with antitrust, and problems with customer care and product quality indicate a company in trouble, and these troubles could all peak at once and cripple the firm. In short, Google needs to step up or step out of some of these efforts.

One final comment: Apple isn’t standing still, and the recent filing of a 3D patent application suggests it will be making another breakout move with the iPad 3 or 4.

Product of the Week: Asus Transformer

Building a better iPad is a losing game, and most of the competing products are iPad-like slates. The most different of the products I’m currently reviewing is the Asus Transformer.

This product is amazing, and what makes it so is the keyboard integration. The keyboard not only attaches securely to the tablet, turning the result into a small laptop, but also has enough weight so that touch still works. Part of this weight is a second battery, creating truly legendary battery life.

It has multiple SD card slots (full SD in the keyboard and micro SD in the tablet), an HDMI port out, and even a full USB port on the keyboard. It actually has a better port out than a MacBook Air when it has the keyboard attached.

The product does have some issues: One of my key applications, Netflix, isn’t available on it yet. Also, the Asus desktop sync application and calendar don’t work, and the included word processor doesn’t appear to have a spell checker.

These problems can largely be fixed with third-party Android apps — and with Netflix approved on Lenovo’s Android tablets, hopefully it will soon show up on the others. 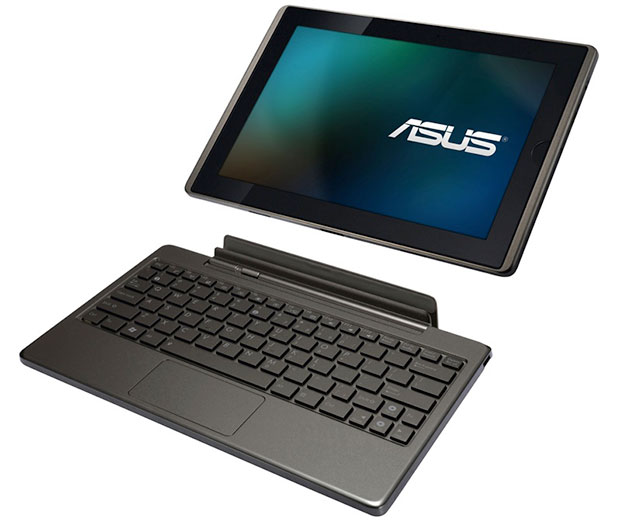 On Amazon, the price for the Transformer tablet is US$489 (32 gig version). For the keyboard/dock, it’s $155, or a little over $640 for both. That compares to the 32 GB iPad without keyboard for $669. Its keyboard and epic battery life make the Asus Transformer my product of the week. It is just geeky cool.