How Technology Could Keep Politicians From Killing Us

The details of the recent Colorado massacre are bothering me this week. What bothers me the most isthat both political parties seem to take an event like this and use it to further an agenda. Theright wants everyone to get armed, and the left wants to take guns away from law-abiding citizens.

Thefirst would likely result in lots more people getting shot accidentally, and the second would make criminalsfeel safer because they would be less worried about someone they were attacking fighting back.

The only thing I walk away with is that both sides seem to agree on one thing, and that is that my life mattersless than their respective agendas. I don’t think that is a good thing, and I think technology and somecommon sense could go a long way toward eliminating the chance of another massacre and increasing our life expectancy. I don’t know about you, but I’m kind of a big fan of things that help keep me from getting shot.

I’ll close with my product of the week: a great car radio I’ve been messing with, from Kenwood.

We have technology deployed in some cities that can not only identify gun shots, but also triangulateand locate where they came from. In addition, we increasingly have cameras that can capture crimesin process and, were you to connect them, the increasingly understaffed police departments couldrespond more quickly and be better equipped to deal with potential problems.

The current issue is that most of the public and private systems aren’t integrated to allow this to happenautomatically. Rather than spending a great deal of time trying to find people to blame or politicizing atragedy like the one in Colorado, why not use this as an opportunity to equip soft targets like theaterswith technology that will ensure folks acting violently are both quickly identified and dealt with?

It seems the only reason this latest attacker got caught was that he sat and waited forlaw enforcement to show up after he apparently got tired of shooting people. The arriving officersinitially thought he was one of them. Just think of how much more badly this could have gone had hemaintained that illusion until he started shooting the officers?

Preventing Panic: No App for That

One of the initial problems in either a random attack or a disaster — manmade or otherwise — isthat panic sets in, largely because people don’t know what to do. This panic was clearly enhanced bythe tear gas or smoke bombs that were set off in the theater.

Had many of the patrons of the theater been able to usetheir phones to navigate to exits and receive advice on what they needed to do in that situation, it islikely many more would have survived. Perhaps, given there were several military-trained folks in theroom, the attacker would have been neutralized more quickly.

Once the attack became news, systems could have been prepopulated to handle any copycat attacks,which would have been a far better approach than what happened. What happened was that a large number of peoplestarted buying guns and going to theaters armed but not trained, which could have accidentally createda second disaster.

Particularly in the case of a dark, smoke-filled room, the likelihood of even a trained marksman hittinga target is very low, while the likelihood of accidentally killing a loved one or child is very high, increasingdramatically the potential for death and damage.

Keeping someone with a gun calm in a situation likethis is critical. (Years ago I was involved in a case with two off-duty armed police officers who didn’tknow each other and got into a fight. It didn’t end well).

We have technology that could significantly decrease panic and help eliminate mistakes that coulddramatically increase the potential damage.

Virtually every time there is a massacre like this, including 911, it turns out there was substantial evidence thatpeople were aware a major problem was approaching. Discovering this after the fact just seems toadd insult to injury and makes our politicians, medical organizations and police look stupid.

The issueoften is that the concerns surrounding privacy overcome the potential to save lives. You could createa data repository where people could report patterns regarding patients, relatives and neighbors they’re concerned about.Then analytics could be run that would be tied to registries ofgun and ammunition buyers to identify approaching catastrophes. A red flag would require both thepotential for violence and the acquisition of a tool, or tools, to create it.

In most cases, the attacker seems to be buying multiple weapons whose primary purpose is to shootpeople, and you could model this to optimize the balance between privacy and safety. The processwould occur within secure systems, and only when the elements that suggested an attack wereimminent would law enforcement be notified. What is clear is that a system like this appears to existfor external terrorists but not for many similar domestic threats.

Wrapping Up: We Can Be Safer

I think both the right and left are wrong. Taking away guns and turning us all into victims is no smarterthan allowing a bunch of untrained folks to buy guns, because we are far more likely to be shot by thelatter than an actual criminal.

Same with privacy. Losing it is anti-American, but ignoring known threatsuntil someone dies is just stupid.

Technology currently exists in market that can be used to make ussafer. What I’d like to see is politicians spending less time trying to figure out ways to turn a massacreinto a political pro-gun or anti-gun advantage, and instead using it as a rallying cry to ensure it never happensagain.

Instead of the post-911 silliness that resulted in billions spent to make flying less fun and dramatically increaseour chances of acquiring Xray-related cancer, we should have had a teachable moment. Simply locking the pilots’doors and changing the policy of turning planes over to terrorists virtually eliminated the cause of 911 — cheaply.

Maybe it is time we started focusing on the cause of these things more, and technology — properly used –could go a long way to help.

Technology could also be used to rank our politicians in order of their likelihood to kill us accidentallythrough bad decisions, and that’s an app I’d pay for.

I’ve just completed a six-month process of figuring out how to take an older car and give it an in-carmedia system in line with a current vehicle. The problem currently is that car development can take upto five years, and a car can remain largely unchanged for the same period of time.

This means even whenyou buy a new car, the in-car entertainment system could be up to 10 years out of date. Buyingan older car can take you back to the dark ages.

That was the case with my 2004 Jaguar XKR project car. I systematically looked both at systems witha powered flip screen and those with fixed screens, and after a massive amount of testing — and not-insignificant cost — ended up deciding the Kenwood Excelon DNX990HD was best in class. Atnearly US$1,400, it isn’t cheap, but you end up with a very rich set of features. 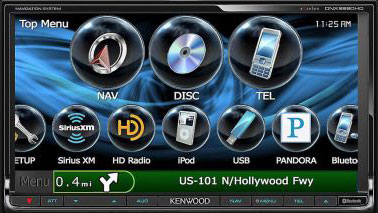 This is Kenwood’s best system, and itincludes integration with both iOS and Android for both phone features and targeted apps likeAha Radio and Pandora. What makes it stand out is that Kenwood gave the system enough power touse these advanced features, and you can switch between them quickly and efficiently.

It has a typical touch interface, and the screen (unlike any built-in screen I’ve seen) can be adjustedfor angle to address glare. It can be — and mine was — integrated with the existing steering wheelcontrols, and it comes with voice control.

After six months of research and testing, the Kenwood ExcelonDNX990HD beat out comparable systems from Pioneer, Clarion and Alpine and became my product ofthe week.