As I’m writing this, Microsoft is reporting a solid quarter with sales (or use) exceeding expectations significantly on four keystone products: Windows 7, Office 10, IE8, and the Xbox. While Steve Ballmer is clearly not performing at Steve Jobs’ incredible levels, Microsoft continues to generate cash at a rate that most companies, states and countries don’t seem to be able to approach.

Yet he is also the CEO who is highest on the “soon to be ex-CEO” list. Underlying this is a recent study that found we, as a species, will avoid the truth if it conflicts with our beliefs. This not only helps Steve Jobs and hurts Steve Ballmer, but it could kill us. Let’s explore this frightening power of perceptions.

I’ll close with my product of the week: an AMD-based laptop I think my wife would love (too bad it’s my birthday month not hers, but — don’t tell her — I ordered one anyway).

The Reality of Perceptions

If I were to give you a description of two CEOs and ask you which one was likely more successful, I wonder if you could choose the right one.

I could likely quote from both Steve Ballmer’s and Steve Jobs’ unauthorized biographies to prove my point, but I’m trying to learn that facts seem to actually cause people to retrench on unsupported positions, and it is likely easier to point to the research that found misinformed people rarely change their minds when presented with facts.

Look at the situation with the iPhone. Here is a product that is clearly faulty at being a phone, largely due to a blended problem of a bad carrier and a unique antenna design. We have solid evidence of both, yet most still believe Apple’s position that it is the best smartphone on the planet.

Given that it kind of sucks as a phone, you’d think that image would be hard to sustain, but it doesn’t seem to bother many people, as folks (though, interestingly, fewer iPhone 3 users) continue to line up to buy it.

Here is the key that Steve Jobs gets and Steve Ballmer doesn’t: As long as folks are happy with the result, it really doesn’t matter. Here is another thought: Had Microsoft understood this better, Windows Vista would have been a hit rather than a disaster, because it could have been presented in a vastly more positive light. However, Microsoft simply chose not to do that and eventually agreed it was crap.

The iPhone 4 may have been Apple’s Vista, but handled better. Ironically, this agreement on Windows Vista’s inferiority came after a long period of internally denying there were critical problems that had, by then, been fixed.

Another way of looking at this is that with the iPhone 4, the famous Steve Jobs “Reality Distortion Field” worked both inside and outside of Apple, while at Microsoft — during the Vista times — Steve Ballmer’s was only working inside of Microsoft and against the company.

The Danger of the “Reality Distortion Field”

I think that historically — or at least when he returned to run the company — Steve Jobs understood he was bending reality and worked to correct problems he wouldn’t admit to publicly. For instance, the Apple products he initially had to sell he had called crap before he took the company back over, praised before fixing, and then eventually fixed. He couldn’t move to Intel right away and so said he wasn’t going to go and propped up PowerPC publicly while working secretly to move to Intel.

His reality distortion field was working on others, but he seemed to have a clear grasp of reality himself. Now, according to the unauthorized biographies, that’s not the way it initially worked, and people questioned whether he perceived the truth — which is likely what really got him fired.

But at the recent press event when he sort of apologized for the iPhone problems, his arrogance implied he may no longer realize he is bending the truth and may not move to promptly address the problems going forward — and, eventually, reality could penetrate his distortion shield. In other words, he may be killing the magic by no longer realizing it isn’t real.

Conversely, Steve Ballmer is perceived as a failed CEO both inside and outside of Microsoft. If he wants to continue, he has to shift the perceptions of key influencers both inside and outside the company to one that views him more favorably. He is being killed because Microsoft has repeatedly failed, in the minds of the influencers, to produce anything approaching an iPhone, iPad or iPod.

Either Ballmer has to step away from those markets, or he has to have an unmitigated success in one or more of them. So far, Microsoft has done neither.

Obama Lesson: And Ending the World

Last week, we saw a woman who is likely a credit to both antiracism movements and the U.S. get pilloried by the NAACP and the Obama administration for being racist, because facts didn’t matter to them. Think a moment about what the primary purpose is for the NAACP and what it did. It was the equivalent of OPEC banning oil, but it showcased just how far people who should know better can go to avoid the truth.

I think you could look at the cause of the BP fiasco, the horrid Katrina response, and even 9/11, and argue that it was the inability to accept facts that was the core cause of each disaster. This isn’t an Obama, Fox, or even media problem in general — this is human species problem that we all need to recognize and mitigate. That’s partly because folks are using it against us, but partly because it is incredibly dangerous.

We continue to mess with things like nuclear power, global warming, pandemics and pollution — any one of which could end the human species. Our disregard for the facts could create such a big mistake that everything we have seen before in terms of disasters could be trivial by comparison.

Now you can see my concern over the reality of a world where the facts don’t matter (I still think everyone should read the book Living in a Post Fact Society). It was one thing when we were running around half-naked and believing that gods moved the sun, the world was flat, and that anyone who believed otherwise should be stoned to death. We couldn’t wipe out the species back then.

Now we are messing with things like the Hadron Collider which might or might not create planet ending events, and the only thing we know is that anyone who might accurately warn of any related disaster is likely to come under attack. I’m not saying there is one — only that if there were, we would actively try to ignore it.

The risk isn’t the collider; it is a practice of rabidly avoiding the consideration of any related risks or, conversely, believing in them even if they aren’t real. In other words, the world’s problem is we all have a reality distortion field, and it is working really hard to kill us.

Wrapping Up: Challenge Your Own Beliefs

While our hard-wired tendency to reject facts that are contrary to our beliefs certainly works against Steve Ballmer and helps make the iPhone successful, the bigger problem, I think, is that it could end us.

Many of our medical advancements have resulted from challenging conventional thought. Even thinking of going to the moon might have resulted in being stoned to death a century or so ago. Our continued existence may depend on one thing: our ability to recognize the truth when we see it.

Individually, our own success — and this is the lesson of the Steves — may depend on both understanding the problem (and being able to use it to our own benefit) and making sure it doesn’t bite us in our own butts, individually or collectively.

Put another way, the same thing that has us drooling over a faulty phone could have us ignoring a problem that could wipe out the planet. I could give a crap about the phone; I’m kind of attached to the planet.

In short, our lives may depend on our ability to see the truth.

Product of the Week: The AMD-Based Sony VAIO My Wife Would Love

Like most, I don’t do enough nice or appreciative things for my wife, so I’m constantly looking for products she might enjoy. Like a lot of folks, our eyes aren’t what they were, and we need bigger displays in order to work. Laptops just don’t provide them.

On the other hand, most of us don’t need to spend US$2,000 on a laptop either. I was at a recent AMD showcase of products based on its technology, and the Sony VAIO VPCEF22FX jumped out as her perfect laptop. 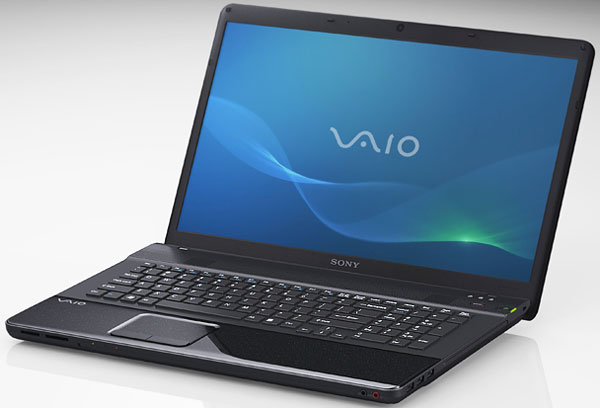 Sony seems to come the closest to having a design like Apple year in and out, and Steve Jobs used Sony as a target when he rebuilt the company. As a result, she has always seemed to prefer Sony (or Apple) products.

This one has clean lines, all the bells and whistles, more performance than her current Dell Studio laptop and an affordable price (at Wal-Mart) of $718. It has a huge 17.3-inch display, a 500-GB hard drive, a reasonably fast dual core processor, and ATI graphics for a price that seemed impossible a few years ago.

As a result, the Sony VAIO VPCEF22FX is my product of the week.