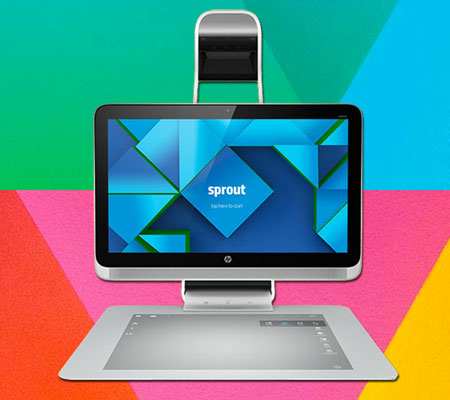 The ecosystem might revolutionize manufacturing, sharply reducing the design-to-prototype cycle and making it easy to customize products. It also might let individual entrepreneurs — the traditional backyard shops — carve a niche for themselves in the market.

“3D printing technologies are used in manufacturing today, but HP’s printer will be relatively low-cost and fast,” Pete Basiliere, a research vice president at Gartner, told TechNewsWorld. “That’s where the disruption will come from.”

What the Sprout’s About

It has an illuminator powered by a DLP projector. The illuminator’s four-camera sensory system includes an HP camera with up to 14.6-MP resolution and the Intel RealSense 3D camera for instant capture of 2D and 3D objects.

It comes with the Adonit Jot Pro stylus.

Some consumer applications, including games, are already available, and HP is offering devs the Sprout SDK now.

The Sprout can be purchased from HP’s website for US$1,900, and it will be available at selected retailers later.

HP will incorporate a full range of colors into the production process.

The company is developing a 3D platform and working with early customers in the development process.

The printer will be widely distributed in 2016.

“We see tremendous potential in the aspects of the virtual-reality handshake HP is bringing on board,” Ramasamy said. “It would help companies like GE, Boeing, BMW, and others who are pioneering the use of 3D printing for real-world applications.”

Manufacturing companies “are increasingly looking to blur the lines between the digital and the real worlds,” he continued. “This solution from HP would enable design teams to blur that boundary while effectively translating their collaborative thoughts into real-life working models and prototypes.”

However, “the industrial world is well entrenched with the AutoCADs, Siemens, PLMs and Dassaults of the world, [so] it is hard to see why they would transition from one design platform to another — like Sprout — although it offers more bells and whistles,” Ramasamy pointed out.

HP’s technology “is better for short-run manufacturing, as when you get to larger runs, even a high-speed 3D printer becomes uneconomical,” Rob Enderle, principal analyst at the Enderle Group, told TechNewsWorld.

“This will allow higher degrees of customization and let smaller shops create more interesting products, because setting up manufacturing will be less expensive,” he noted. “It will also improve rapid prototyping, which cuts across all sizes and types of physical manufacturing.”