HP became the latest vendor to unveil brightly colored netbooks in its lineup with its announcement of several new products Wednesday at the Consumer Electronics Show in Las Vegas. 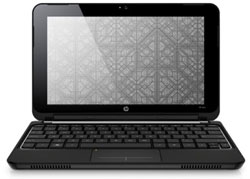 Among the new offerings are the Mini 210 and 2102, which are positioned as secondary PCs.

The Mini 210 and 2102, HP said, are companion PCs that focus on information “snacking” and content access, as opposed to the content-creation capabilities offered by its full notebook and desktop PC lines. The two are designed for consumers and business professionals who surf the Web, check email, listen to music and need access to people or information while on the go, according to the company.

The pair provide optional high-definition video playback and mobile broadband connectivity that buyers have to purchase separately. Both are offered with a global positioning system (GPS) as an option.

The Mini 210 is available in two varieties of black as well as silver, blue and red, while the Mini 2102 is available only in black. Both have a 10.1-inch screens and a keyboard that’s 92 percent the size of a standard keyboard. Buyers can choose between standard screens and HP’s Brightview Infinity widescreen displays. They also have webcams and microphones.

The HP Mini 210 and HP Mini 2102 support up to 1 GB of memory and hard drives of up to 320 GB. Each has a built-in VGA port so users can connect to an external monitor. They also have five-in-one digital media slots. Both run on 1.66 GHz Intel Atom N450 processors.

Looking into the Mini 210

The Mini 210 comes with HP CloudDrive, which lets users store and access content on an Internet-connected server. This is based on ZumoDrive, a cloud-based file synchronization and storage service that has a cross-platform client running on Windows, Mac, Linux and iPhone. ZumoDrive offers up to 2 GB of free storage.

It also leverages wireless connectivity through HP MediaStream and HP QuickSync software. MediaStream lets uses stream multimedia content from one PC to another over the Internet without having to download the content first. QuickSync automatically synchronizes files created or edited on the road with a home or business PC over a wireless connection when they are connected to the same network. Users must purchase wireless service contracts on their own.

The Mini 210 has the HP QuickWeb feature, which lets users access the Internet without booting it up complately. This is based on DeviceVM’s Splashtop technology.

HP is not alone in using Splashtop — the technology is being offered on portable computers from many manufacturers now. “We’re on notebooks, netbooks and nettop PCs from Acer, Asus, Lenovo, LG, HP and Sony, and we’re also doing some work with Dell,” Dave Bottoms, senior director of product management at DeviceVM, told TechNewsWorld.

Splashtop, which is based on Linux, offers both security and access speed. “We’re in our own partition on the hard drive which is totally locked down and is separate from Windows,” Bottoms explained. “Also, our browser is Mozilla-based, and we don’t let you run and execute any code on Splashtop, including browser extensions.”

There is no standard offering for the Mini 210 and 2102 — they are fully customizable at the time of purchase.

That makes specs like weight, hard drive capacity and RAM capacity difficult to pin down. The Mini 210 starts at 2.67 pounds, but the weight will go up depending on the configuration.

The options also make for flexible pricing. The HP Mini 210 running Windows 7 will be available on Thursday at a starting price of $299. 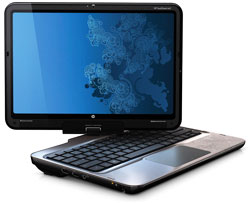 HP also unveiled the TouchSmart tm2, a convertible, multitouch-enabled notebook PC; and the Mini 5102, its first touch-enabled netbook. This can function as either a notebook or a tablet. It runs on an Intel Core 2 Duo processor and can be upgraded to include ATI Mobility Radeon discrete graphics processors. It includes a fingerprint reader.

Battery life is up to nine hours. The tm2 comes with a Netflix app that delivers streamed movies and TV episodes; other apps include Twitter, HP Music Store, and Hulu Desktop.

The TouchSmart tm2 is scheduled for availability in the U.S. Jan. 17 at a starting price of $949 — not very expensive relative to other touchscreen devices. “There’s a shortage of touch-enabled displays at the moment, and they tend to be kind of expensive in a value-focused market,” Rob Enderle, principal analyst for the Enderle Group, told TechNewsWorld.

Touch apps for the tm2 include BumpTop, a three-dimensional interface for photographs and documents that sounds very much like what Google’s Nexus One smartphone does with Cooliris software.

The tm2 is in what could turn out to be a hot category. “These convertibles, where the lid flips around, will be the hot products,” Andrew Eisner, director of content at Retrovo, told TechNewsWorld. “And the big news is the touchscreens in these new laptops or notebooks.”