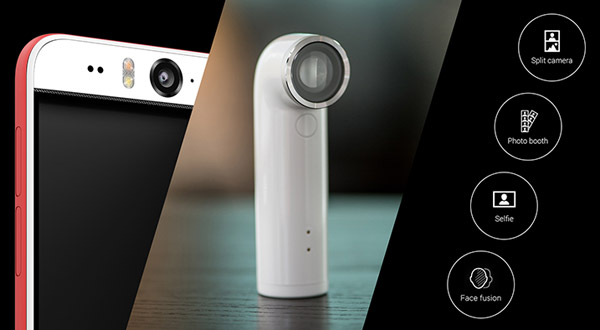 HTC on Thursday debuted two new products for photography enthusiasts. One offering, the RE, is an L-shaped camera that doesn’t have a viewfinder. The other is a new smartphone, the Desire Eye, which boasts a 13-megapixel front-facing camera for high-resolution selfies.

With RE, HTC appears to be targeting the action set that has created a lucrative market for point-of-view camera makers like GoPro.

“We are taking you out from behind the viewfinder and putting you back where you belong, at the heart of the action,” said Peter Chou, CEO of HTC.

It’s easy to get out from behind the viewfinder with the RE, because it doesn’t have one. The lens in the periscope-shaped shooter covers 146 degrees, so chances are you’ll capture whatever you point the camera at.

Immediacy is built into the RE. The second you pick it up, it will power on, thanks to a sensor built into its grip. It has a 16-megapixel camera. It can capture 1080p HD video, and it supports both slow motion and time lapse recording. It can shoot stills and video under water.

Although RE doesn’t have a built-in viewfinder, HTC offers both Android and iOS apps that allow the unit to use the display of a mobile device as one. You can view pics and vids stored on RE on that display, too.

If the RE is lost, stolen or damaged, you can avoid anxiety by automatically scheduling backups from RE to a mobile device or the cloud.

With the Desire Eye, HTC may elevate the art of the selfie by giving the front-facing camera the same sensor chops as the rear-facing camera: 13MP. 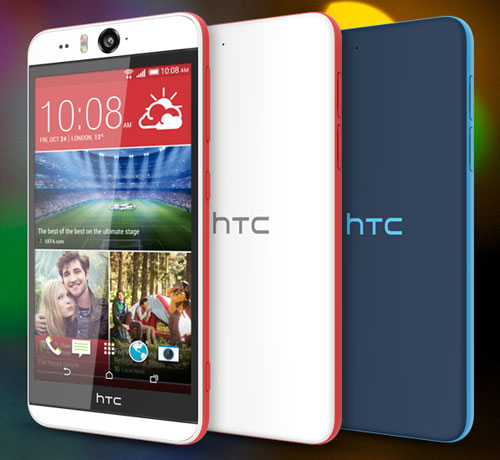 The unit has BSI sensors to snag sharp images in low light — and when the light gets too low, intelligent dual LED flashes on both front and rear cameras will brighten things up.

Included with the phone is the HTC Eye Experience, a software suite for creating split-screen content from stills or video shot simultaneously with front and back cameras, cropping an image shot with the front camera into one captured by the rear one, triggering the front camera’s shutter with a voice command, fusing your face with those of others, and touching up a face with live skin smoothing.

Better yet, those Eye features will be pushed to other HTC models in the coming months.

Shouting Above the Din

HTC also announced a new version of Zoe, a collaborative video-editing app for mixing photos and videos into “highlight reels.” It’s available now as a free app for Android phones and will become available later in the year for Apple products.

Upping the ante on the Desire Eye’s front-facing camera appears to be HTC’s attempt to gain some visibility for itself in the smartphone market and step outside the giant shadows of Apple and Samsung.

“Most smartphone manufacturers need a way to differentiate themselves,” observed Carl Howe, vice president of 451 Research.

“If you go head to head with iPhone or Galaxy, you’re probably going to lose,” he told TechNewsWorld.

“The challenge we have today in the mobile phone market is it’s very, very difficult to distinguish yourself from others on hardware,” noted Technalysis Research founder and chief analyst Bob O’Donnell.

The super-selfie angle could grab HTC some sales, but the effort will require some marketing chops, said Chris Jones, vice president and principal analyst with Canalys.

“HTC has struggled with some of its marketing campaigns over the last two or three years,” he told TechNewsWorld. “It’s marketing hasn’t been continuous — it’s been start/stop.”

While the Desire Eye fits into HTC’s traditional product lines, the new RE camera doesn’t.

“I think a lot of people are scratching their heads over this one,” Jones said.

“Having lost so much market share in the last three years, many would say HTC needs to focus on its phone business,” he suggested. “However, the RE does show some innovation from HTC.”

With the RE, HTC could be taking a savvy fork for its business.

“It’s HTC’s move into the Internet of Things, moving beyond the smartphone,” said Ross Rubin, principal analyst with Reticle Research.

“It helps them build connectivity and intelligence into other products, as well as build an ecosystem not only for its smartphones but others, too,” he told TechNewsWorld.

The RE could be a winner if it’s seen as a phone accessory.

“Accessories do sell well,” Canalys’ Jones noted. “The attach rate is good for them.”

Pricing for the RE could be a problem, he cautioned. “At $199 it might stall.” 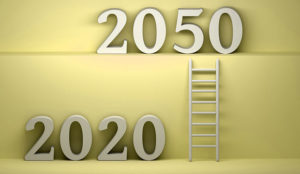