I Need a Hero

I’ve been watching some of the drama surrounding Donald Trump, the concerns surrounding the air traffic controllers, the close call with the first lady, tourists being shot in Florida, U.S. citizens being shot off their jet skis, the inability to control spending — and the “Shrek” version of “I need a Hero” started playing in my head. We have children committing suicide at an increasing rate and even folks jumping off the Golden Gate bridge again here on the West coast, and I really think a lot of this can be connected back to a government that has simply forgotten about the fact that the country is made of individuals who worked together to fix problems — not politicians who complained about them.

It is great that our president recognizes the power of Facebook, but I’d rather he kick some butt and take names than friend me.

While I’m going to be a bit critical of the sitting administration, I want to point out that it is an issue of timing, because the last one wasn’t exactly wonderful either. I think the country needs a hero and I’m pretty sure that hero isn’t Donald Trump or Charlie Sheen. This is rant week and I’m on a roll — I’ll talk about needing a hero this week.

I’m going to close with a very interesting product of the week: the FlyNano — a flying jet ski that just looks like a ton of fun and could be handy if you needed to get out of Dodge fast.

One of the things Microsoft had under Bill Gates and Apple still may have under Steve Jobs is the sense of a CEO that will do whatever it takes to the job done. Neither of these guys phoned it in. Granted, both men had their issues, but when it came to employees looking up at them, they saw men they could depend on, and they knew that when the going got tough, these folks would kick the ass of anything they ran up against.

Now compare them to Yahoo’s embattled CEO, Carol Bartz, who seems to be setting a record for bad financial news and was ranked as the as the most highly paid underperforming CEO of the year. On her recent analyst call, she once again blamed Microsoft’s help for Yahoo’s problems.

In short, Bill and Steve step up and their companies thrived under their leadership. Carol’s employees and investors get excuses — and not particularly good ones. If you look at both sides of the political aisle, do you see more Bill-and-Steve-like folks or Carol clones? Unfortunately, we seem to have way too many of the wrong type of folks in business and government.

Trump: Too Much Crazy, Too Little Hero

I often write on the concept of a 5th column in companies, most recently one put there by Apple, because so many tech companies that compete with Apple seem to be acting suicidally stupid.

You may recall that long before either Carly Fiorina or Meg Whitman got through their respective primaries, I forecast they would lose their elections due to choices they were likely to make, almost as if they had folks in their camps working against them. Recall my prediction was proven right, even though they outspent — significantly — the folks they ran against.

Donald Trump says a lot of things that resonate with many of us with regard to being more aggressive in protecting our interests. On the other hand, he is his own biggest fan and has a bad habit of picking stupid issues like Obama’s birth (funny or die deals with that nicely here) that make him appear mentally unbalanced.

He is doing well in the polls because he is saying somethings that resonate — like taking more aggressive positions with China and Libya. Yet he won’t win, because he isn’t behaving heroically (heroes aren’t their own biggest fans) and because he often appears almost Charlie Sheen-crazy.

If someone is giving him advice to do this, that someone is his own worst enemy, even if that someone is the little voice in his head. Remember Ross Perot? He could have won, but too much crazy came out, and — I spent some time looking into this — he got some really bad advice, which killed his chances.

But I do think a lot of what Trump says about taking the initiative to aggressively correct the U.S.’s fall is what people hope for in a political hero. Even though Trump may be unelectable (and my little voice is saying “thank god”), he does point the way to what we need. Let’s be clear, I’m not looking for heroically crazy, but I do think we need a man or woman who takes names and kicks ass.

Obama: Too Little Heart, Too Much Politician

I’d say Obama’s motto is “when the going gets tough, delegate” — and that reminds me way too much of what we typically get in a professional CEO. We go to war in Libya; is he on deck at the beginning helping ensure the safety of U.S. troops and the timely handoff to the allies? Nope. He is thousands of miles away messing around in Brazil.

His wife has a close call on an airplane due to bungling under his own administration. Is he kicking butt and taking names? Nope — he is having a social meeting at Facebook. Seriously, his own wife is put at risk and nothing, really, nothing?!?

If the guy can’t get up a head of steam about the protection of his own wife, what about protecting the rest of us? I love that he gets the importance of tech; I’m just not fond of his timing. And he should thank god he isn’t married to my wife, who likely would be questioning his priorities at the moment, physically, and not in a good way.

You see, I think this is often the problem of top executives in government or in business. They seem to think passion is a bad thing and that the sound bite or media event takes precedence.

Folks even made fun of Steve Ballmer’s passion in his “developers, developers” speech. I saw this and wished more CEOs got this excited about their companies. Of all the things for Steve to fix, I personally regret this one the most and think that whoever talked him into giving up this passion should be cut up into little bitty pieces and buried alive.

Many CEOs don’t seem to give a crap about their companies’ products or employees. In the case of the U.S. president, if a U.S. citizen is executed by a Mexican drug lord for riding a jet ski, people expect the country to go in and kick some Mexican drug lord’s ass, not be missing in action.

I do agree with Trump that it seems we are increasingly viewed worldwide as a country of wimps, and with the exception of Washington, Theodore Roosevelt, Eisenhower and Reagan, that problem has seemed to start at the top.

Wrapping Up: We Need a Hero

What the country and most U.S. companies need are folks who take names and kick butt. Bill Gates, Steve Jobs, Joe Tucci and, yes, even Larry Ellison are types who don’t make excuses — they get things done.

The war on drugs isn’t working, our addiction with oil is unabated, we need to fix the cost of healthcare before government pays for it, much of our financial problem is directly related to self-dealing by lobbyists and politicians, and we seem to have lost the ability to protect our citizens while reducing their ability to protect themselves.

Product of the Week: FlyNano

Given that I think the country is going to hell in a handbasket, finding the perfect get-out-of-town vehicle has become a higher priority. Most recreational vehicles are limited to two dimensions, but this one — the FlyNano — does three.

With a substantial ability to fly over things, at least you could imagine flying to safety if we suddenly were invaded by the Chinese or Arabs that Donald Trump plans to piss off should he be elected. 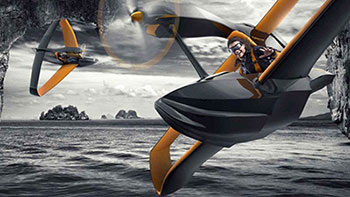 This recreational vehicle is likely on Paul Allen’s wish list. At US$40K a pop (for the cheap one), it isn’t an inexpensive date. But with a hull and wings of carbon fiber, and an electric option for those who are environmentally aware and don’t wonder where they hell you’ll find a charger to charge it up again, this could be one of the coolest toys to ever be sold.

Can you imagine popping one of these in the water and then buzz bombing Larry Ellison’s yacht? Well maybe not Larry — he owns a couple of fighter planes — but you get the point.

Sometimes, and mostly in the Hammacher and Schlemmer catalog, you see something that just looks like it would be an insanely fun toy that you might not survive owning. Since I’m talking just a little crazy this week, the FlyNano is my product of the week. Now — I wonder if you can get it with rapid-firing paint guns?