IBM Discovers How to Store Data in a Dozen Atoms

Researchers at IBM’s Almaden Labs have created a 12-atom magnetic memory bit, in a continuation of work on atomic-level memory storage first posited in 1959 by American physicist Richard Feynman. 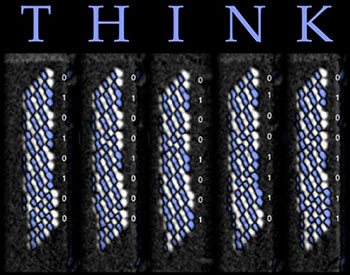 This image shows a magnetic byte imaged five times in different magnetic states to store the ASCII code for each letter of the word “THINK,” a corporate mantra used by IBM since 1914. The team achieved this using 96 iron atoms — one bit was stored by 12 atoms and there are eight bits in each byte.

Disk drives currently use about 1 million atoms to store a single bit of information, according to IBM.

The scientists used antiferromagnetism to achieve their result.

They stored the ASCII code for the word “Think” on 96 iron atoms using this approach.

“This atomic storage is not something you’ll see coming to a Best Buy near you, but it’s an indication of the way the IT industry continues to find innovative ways around the limitations of storage technology,” Charles King, principal analyst at Pund-IT, told TechNewsWorld.

“What’s interesting about this is, people have wondered where the brick wall is — the maximum amount of data that can be stored magnetically,” Jim Handy, an analyst at Objective Analysis, told TechNewsWorld. “The researchers worked this backwards, to find out what’s the minimum amount of storage we’ll need.”

IBM did not respond to requests to comment for this story.

The IBM scientists used a scanning tunneling microscope (STM) to engineer 12 antiferromagnetically coupled atoms that stored a bit of data for hours at low temperatures.

In the simplest terms, the spin of electrons in atoms of antiferromagnetic materials aligns in a regular pattern with those of their neighbors pointing in opposite directions.

Visualize a flat surface with arrows in a 4 by 4 pattern — four rows and four columns. The arrows in each row and column alternately point up or down, so an arrow pointing up will have its neighbors to the sides and immediately above and below pointing down, for example.

Antiferromagnetic order exists at low temperatures, and vanishes at and above the Neel temperature. This temperature depends on the material used.

In order to store the ASCII code for the word “Think,” the researchers had to image a magnetic byte (one byte = 8 bits = 96 atoms at 12 atoms per bit) five times in different magnetic states.

The Long, Hard Road to Market

Given that the process of writing data onto a magnetic byte is tortuous, and can only be carried out at low temperatures, it’s not likely that IBM will be able to commercialize its atomic storage technology any time soon.

“With an announcement like this, you’d expect a five- to 15-year horizon with risk at the back end,” Rob Enderle, principal analyst at the Enderle Group, told TechNewsWorld. “Manufacturing to scale is often a very difficult problem to solve with a technology like this, which is why the very wide range.”

Come Play With My STM

A scanning tunneling microscope is an instrument used to image surfaces at the atomic level. IBM Zurich researchers Gerd Binnig and Heinrich Rohrer developed the device in 1981 and won the Nobel Prize in Physics in 1986 for it.

The STM is based on the concept of quantum tunneling.

The atomic storage developed by IBM researchers follows on from previous experiments using the STM.

In September of 2010, IBM researchers used the STM to take 100,000 snapshots of an atom within less than one second. This let them look into what’s happening in individual atoms in close to real time, and paved the way for the creation of ultra-high density storage devices, among other things.

In April of 2010, IBM scientists in Switzerland used the STM to create a 3D replica of the world that measured 22 x 11 micrometers. That technology could be useful in the semiconductor industry, among other areas, they said at the time.

IBM’s work in atomic storage follows on from an experiment conducted in 2002 by University of Wisconsin physics professor Franz Himpsel.

Himpsel created two-dimensional atomic storage on silicon using a small amount of gold using an STM. He used 20 atoms to represent one bit of data.

That work was sparked by a lecture American physicist Richard Feynman gave in 1959 at an American Physical Society meeting. Feynman had suggested, among other things, that it should be possible to make nanoscale machines that arrange atoms the way researchers want.