IBM Extends Open Invitation to Play With Its Quantum Computer 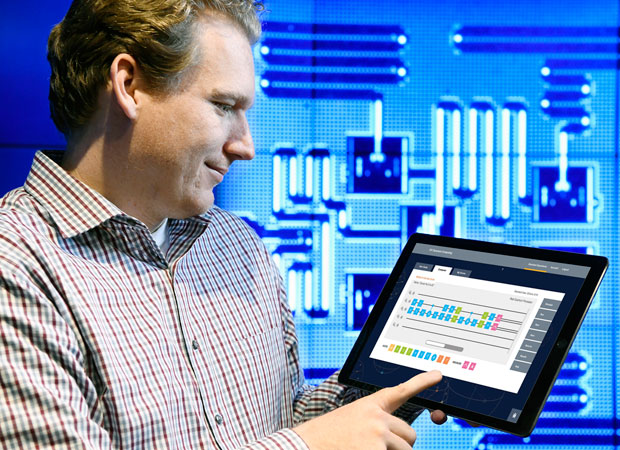 IBM last week announced that it would allow researchers and scientists to run experiments using its quantum processor.

The IBM Quantum Experience runs on the IBM Cloud. Users will be able to run algorithms and experiments on the quantum processor; work with individual quantum bits, or qubits; and explore tutorials and simulations on the possibilities opened up by quantum computing.

IBM Quantum Computing Scientist Jay Gambetta is pictured above using a tablet to interact with the IBM Quantum Experience.

The processor, which is housed at the IBM T.J. Watson Research center in New York, consists of 5 qubits made with superconducting metals on a silicon chip.

It marks the first step in IBM’s journey toward building a universal quantum computer, the company said.

Heat and electromagnetic radiation can cause errors in quantum information, so signals to measure operations on the quantum processor are sent in and out of a cryogenic dilution refrigerator.

IBM has built on its platform a dynamic user interface that will allow users to connect to the quantum hardware from any device through the IBM Cloud.

It is a GUI that “lets youdrag and drop quantum objects such as gates and measurements across the 5 qubits,” IBM spokesperson Christine Vu disclosed.

Users will be allowed to contribute and review their results in the community hosted on the IBM Quantum Experience. IBM plans to add more qubits and different processor arrangements over time.

“Giving hands-on access to IBM’s experimental quantum systems will make it easier for researchers and the scientific community to accelerate innovations in the quantum field and help discover new applications for this technology,” Vu told TechNewsWorld.

“Access to early quantum computing prototypes will be key in imagining and developing future applications,” she noted.

What’s in It for Users

Problems that can be solved in the near term using medium-sized analog quantum computers include accelerating the rate of materials discovery and speeding up pharmaceutical research.

Researchers are expected to be able to write their own papers and publish the results, Vu said. “The goal is to share results and learnings amongst the community to accelerate innovation.”

Interacting with IBM’s quantum system “should be far cheaper and easier than having to buy and provision your own hardware, with far less risk of obsolescence,” noted Rob Enderle, principal analyst at the Enderle Group.

In the Driver’s Seat

If IBM builds quantum computers and leases “time on them as a business model rather than selling the chips and/or systems, [it] could be in the driver’s seat of this new wave of computing. They appear to be planting the seeds for such a scenario now,” McGregor told TechNewsWorld.

“The next phase of computing will require revolutionary change,” he said. Quantum computing “is starting to show promise” and likely will be part of the future of computing.

Quantum computers in place now “are actually underperforming existing technology, but that just showcases that we fundamentally don’t understand the technology yet,” Enderle told TechNewsWorld.

Researchers at the Hebrew University of Jerusalem have demonstrated a single photon source that works at room temperature.

Closer to home, researchers at the University of Chicago and Argonne National Laboratory have identified aluminum nitride as a possible method of making inexpensive qubits.