Implant Runs on the Batteries in Your Ears

Implanted electronic devices can be powered by a biological battery that exists in the ear, researchers at MIT, the Massachusetts Eye and Ear Infirmary and the Harvard-IT Division of Health Sciences and Technology have demonstrated for the first time. 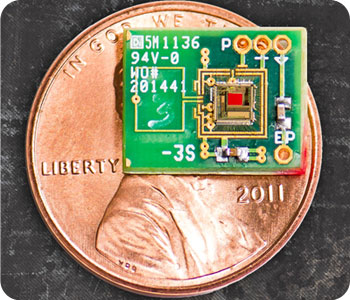 The sensor chip developed by MIT has a radio transmitter.

Team member Konstantina Stankovich, assistant professor of otology and laryngology at Harvard Medical School, implanted electrodes into the biological batteries in guinea pigs’ ears. These electrodes led to low-power electronic devices on the outsides of the subjects’ ears.

“We have been able to extract energy for up to five hours without damaging the subjects’ hearing,” Stankovich told TechNewsWorld.

The devices wirelessly transmitted data about the chemical conditions in the guinea pigs’ ears to an external receiver.

More About the Device

The electrodes implanted in the test subjects’ ears were attached to chips developed by MIT’s Microsystems Technology Laboratories that had an ultralow-power radio transmitter, and power-conversion circuitry.

Power was supplied by a natural biological battery that exists in the ears of all mammals, including humans. This battery’s voltage fluctuates, so the power conversion circuit in the chip gradually builds up a charge in a capacitor in order to get enough juice to power the radio transmitter. That takes between 40 seconds and four minutes.

However, the biological battery still didn’t provide enough voltage to start the transmitter.

“An AA battery gives you 1.5 volts, but the energy source we’re harvesting puts out 0.1 volts, and we’re taking only a very small amount of that, because we know this biological battery is essential to hearing,” Stankovich said.

The researchers shot a burst of radio waves at the control circuit to kick-start it. Once the transmitter was fired up, it was self-sustaining.

The Ears Have the Power

The biological battery resides in the cochlea, which is a spiral-shaped cavity in the inner ear that has three chambers. Two of these, the scala vestibuli and the scala tympani, contain perilymph, and the third, the scala media, or cochlear duct, contains endolymph.

Perilymph is a liquid containing more sodium than potassium. The endolymph contains more potassium than sodium. The endolymph’s high concentration of potassium ions produces an ionic electrical potential that’s about 80 to 90 millivolts more positive than that of the perilymph.

The scala vestibuli is separated from the scala media by the basilar membrane. The electrical potential existing between both sides of the membrane contributes to hearing.

Here’s roughly how it works: Noise vibrations entering the ear move the perilymph. That motion is sensed by the stereocilia on the Organ of Corti, a cellular layer on the basilar membrane. The stereocilia convert the motion they sense to electrical signals, using the differences in the electrical potential existing on both sides of the basilar membrane, and send these signals to the brain through the auditory nerve.

The chip used by the researchers “would occupy about a quarter of a penny” so it can be fully inserted into the ear of a rodent or a human, Stankovich said.

“Ultimately, the electrodes will be inside the cochlea and the chip in the middle ear,” Stankovich continued. “We are working on packaging and the miniaturization of the electrodes.”

The device could be used “as a sensor for the inner ear and potentially to power devices that would deliver drugs and therapies to the ear,” Stankovich said. “Right now, the energy we harvest is not sufficient to power a cochlear implant or hearing aid.”

This “is possible in the long term if circuits are simplified and power draw is reduced,” said Anu Cherian, senior industry analyst for energy and power systems at Frost & Sullivan. “More integrated therapies are beyond the scope of today’s options.”

It might take 10 years before a device based on this technology actually hits the market, Cherian told TechNewsWorld.

“Right now, the tests are on guinea pigs,” she explained. “If they were being conducted on humans right now, I’d say it’s about five years from commercialization.”