Infuse 4G Can Run at Blistering Speed but Where’s the Network?

AT&T has announced that the 4G Samsung Infuse smartphone, which it is reportedly positioning as a “supermodel of smartphones,” will be available to the public May 15. 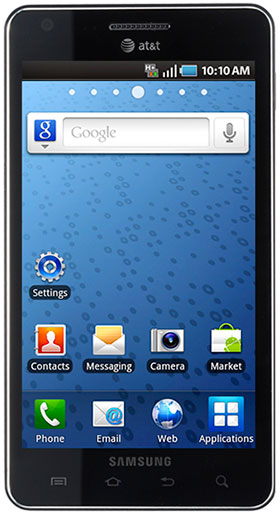 The Infuse runs Android 2.2, has a 4.5-inch super AMOLED Plus screen, can download data at up to 21 Mbps off AT&T’s 4G network, and is thinner than any other smartphone, according to the carrier.

AT&T will include a version of the “Angry Birds” game special to the Infuse.

The carrier did not respond to requests for comment by press time.

Sucking Up Details About the Infuse

It comes in various models ranging from about 9mm to 9.25mm in thickness, making it thinner than any other smartphone, AT&T claims.

The device’s 4.5-inch screen is the largest of any Samsung phone, AT&T added.

This screen uses Samsung’s Super AMOLED Plus technology, which has 50 percent more subpixels than regular Super AMOLED screens, according to AT&T. This makes for better contrast, offering good viewing even in bright sunlight, the carrier contends.

The Infuse 4G has an 8MP rear-facing camera with autofocus and flash that can take HD video and offers HDMI playback so users can view the videos on their TV sets or larger screens. The Infuse 4G also has a 1.3MP front-facing camera for video chat.

There seems to be some question as to the HD video resolution. While AT&T’s press release sets it at 720p, its business center Web page sets the Infuse 4G’s video resolution at 1080p.

Other features include a virtual QWERTY keyboard, a 2GB microSD card with preloaded trailers for upcoming summer movies, expandable memory up to 32GB with a microSD card, and text, picture and video messaging support.

Price: $200 with a two-year contract. Purchasers have to get a monthly data plan of at least $15 as well.

Goodies for the Infuse 4G

The Infuse 4G comes with a US$25 credit for movies on the Samsung Media Hub available for the first 500,000 devices. Owners will be able to share the content among five Media Hub-enabled devices on the same account.

Further, the device will come pre-loaded with a special edition of the “Angry Birds.” Other preloaded apps will include AT&T’s U-Verse Mobile and U-Verse Live TV.

AT&T has also prepared 14 accessories for the Infuse 4G. These include various cases, a vehicle mount and a desk mount.

Weighing Up the Infuse 4G’s Features

“I want one,” Ramon Llamas, a senior analyst at IDC, said when discussing the Infuse 4G. “All that and a sesame seed bun.”

The Infuse is one of the few mobile devices with a 4.5-inch screen, but not the only one, Llamas told TechNewsWorld.

However, screen size isn’t a must-have feature on its own, warned Carolina Milanesi, a research vice president at Gartner.

“Screen size alone is not enough to sell a product,” Milanesi told TechNewsWorld. “It’s about what you can do with it and about the overall package,” she added.

The Infuse 4G “is a strong device, it’s a strong brand, and it’s put together by somebody that knows a thing or two about putting these devices out there,” Llamas added. “I would put the Infuse 4G head to head with some of the really good Android devices over at Verizon Wireless, like the HTC Thunderbolt.”

Although the Infuse 4G can download data at 21Mbps, much of AT&T’s 4G network can’t yet handle that transmission speed.

Not to worry, Llamas said. “Yes, you’re only going to get that speed in certain areas, but other areas will come online to offer 21Mbps at some point,” he pointed out.

Still, processor and download speed are not, in and of themselves, that crucial to most consumers.

“Most users cannot tell what speed is,” Gartner’s Milanesi remarked. “You need both the network and the processor to deliver the rich full experience that users in the high end have come to expect over the past six months.”