Innovation vs. Magic: Why Apple and Microsoft Need James Bond

After seeing the new Microsoft offerings, Steve Wozniak recently lamented that Microsoft is nowout innovating Apple. Wozniak is the surviving founder of Apple, and his perspective clearly isimportant, but he was the guy who got the product to work. It was the other Steve who was largely responsible for creating the entity that was Apple, and it was the other Steve that made it a huge success.

Steve Jobs was moreof a packaging and marketing guy; once he got something that worked, he didn’t mess with it much –he simply refined it and convinced us we loved the refinements. The products weren’t truly magical,any more than a magic show is magical, but he convinced us they were something special — and they weregood enough that we saw them through his eyes.

Apple wasn’t the first with smartphones, tablets or even MP3 players. It was just the first to package a set of compelling technologies, wrap them upwith marketing, and get us to line up to buy them.

Windows 8 is innovative, but it is only part of something that makes up a whole; without the rest, it’snot magical. Surface comes close, but I think what’s missing is a magician. Let me explain.

I’ll close with the Dell XPS 12 tablet — the first Windows 8 tablet I’ve received to review, and onewith the most innovative screens of the bunch.

Thinking back on the first introduction of the iPod, what I didn’t recognize at the time was that I was at an Apple magic show. Like most magic shows, the audience was filled with shills to create an atmosphere. In this case, they knew when to cheer and applaud.

Given that we mostly thought MP3 players were crap at the time, it was critical for us to see it assomething new and different. Even so, there were a lot of skeptics — and for good reason. The iPod was awhopping US$500 in a market populated by under-$200 products that weren’t selling. You’d have to havebeen nuts to believe a product would sell for more than twice-market.

However, that is what makes magic magic — getting people to believe the impossible is possible. You need a magician, though. I kind of wonder if he could be Steve Wozniak?

Both of Microsoft’s recent launches were directly out of the Apple script. They had people in theaudience who cheered at the right times, the products both were in areas where Microsoft had failedin the past, and both products were clearly very different from the products in market.

Unlike that first iPod, the Surface tablet is competitive with other products in the same size class, as are the newWindows Phones. In addition, unlike Apple at the time of the iPod launch, Microsoft is in good financialshape and isn’t living under a cloud of impending failure.

Now there are some minor problems with the Surface tablet, and the Windows Phone 8 is having afew teething pains as well. But the first iPod used FireWire, had little capacity, wouldn’t workwith Windows PC, and did nothing but play music. A lot of people who bought it ended up returningit, largely because they didn’t realize it wouldn’t work with their hardware. Yet it was thefoundation for the new Apple.

Now part of why Jobs was a magician is that he was legendary in the valley. He was the founder of Apple andthe face of the company. He was amazing in front of an audience. It wasn’t just the fact that he couldremember a script after one reading, either. He had presence — he could touch you.

If you’ve ever seen a play with a famous actor and then gone back with a friend and seen the same play with an understudy, you can perhaps get what I mean. The understudy says the words right, even has the intonations right, but it just isn’t as good. Part of the reason, I think, is that you know it won’t be.

With Jobs, you knew the event was going to be legendary. Even if he was off his game, your braincould in the gaps and create the magic. At the end, this was likely more habit than performance — buteven sick Jobs could outdo anyone who has succeeded him.

Now the Surface and Windows Phone announcement events arguably were better than the last severalApple events. It’s as though Apple lost the Steve Jobs script and Microsoft found it somehow.

Still, anyone who tries to read the script will be overshadowed by Jobs — until someone with magicgets on stage and owns it.

Bet you were wondering where the James Bond reference was going to go. Well, over all the JamesBonds stood Connery — every one of them was a pale echo of the first James Bond. However, in Skyfall, Craig and the writers reset the franchise — Skyfall is arguably the best Bond movie ever made.

That’s because itembraced the Connery history and made it part of the new future for the franchise. A hand-off is what’s alwaysbeen missing — a sense of continuity or closure, if you will, and that moment is magical. I think anyone who steps into Jobs’ shoes will have to take the stage like he did, accept the unpassedbaton, and create a similar form of continuity. Then we won’t see a mere attempt at magic — we’ll see a truemagician.

Product of the Week: Dell XPS 12

The Dell XPS 12 is a full Windows 8 experience. This means it will run full office (including Outlook);it will run a VPN (you may no longer need this for work, but you will need it for Netflix if you travelabroad); and it’ll run your legacy apps and games.

Surface is a tablet plus productivity, while the Dell XPS 12is a notebook plus tablet capability. What makes it innovative is the screen that spins from the middleso that you can either use it as a tablet or share what you are seeing with the person sitting across fromyou. 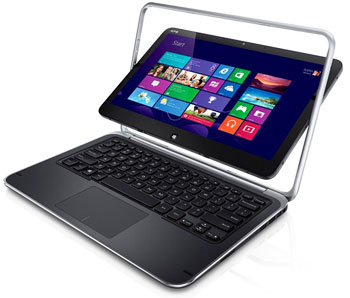 At around US$1,100, it isn’t cheap — but it is one of the lightest notebooks under 4 lbs., and it is solidly in theUltrabook class.

It has a full set of ports and, given it is an XPS, decent performance — so you don’t needa second desktop system for work. It has a rubberized back for grip, a lighted keyboard, and around eighthours of battery life if you don’t push it too hard.

It is the innovative screen that has it in my sights, and it is the first Windows 8 notebook I’ve tested, making the XPS 12 my product of the week.