I’ve seen some amazingly great movies in the last few weeks. I was at Disney World to see “Alice in Wonderland” in IMAX 3-D and watching that movie on a Disney property for this ex-Disney employee was truly magical. Last week, I was at DreamWorks to see “How to Train Your Dragon,” and the movie engaged me heart and mind in what was also a magical experience. It is amazing how far we have come, but DreamWorks’ Jeffrey Katzenberg, who spoke to us for awhile, along with a presentation by PhaseSpace, showcased that future films could not only be even more amazing, but also be made for less — and more often. This last is largely due to technology from companies like HP and Intel, which is what I’ll focus on this week.

I’ll close with my product of the week — the product that for me and a number of the folks I travel with, is far better than the iPad.

The Pain of Making Good Movies

I seldom watch the full credits from a movie and so rarely get how many people and how much work go into making them. You might think an animated movie like “How to Train your Dragon” wouldn’t take that much, but you’d be wrong. It was created by a surprisingly large number of people, and the process of creating is incredibly labor-intensive and doesn’t appear to be that much fun — at least the animation part isn’t. It is easier than having to draw each cell and then color them all by hand but not by as much as you’d think. Using hundreds of screen tools, each movement of each character is created, viewed, and then rendered in a rendering farm through a process that takes hours per second of film.

When they see a wonderful movie like “Alice in Wonderland” or “How to Train Your Dragon”, I’m sure folks think it is worth it, but it sure limits how many movies a company can afford to do and the amount of risks animators are willing to take to try something new. One mistake can delay production and cost thousands of dollars.

But This Is Changing

The processing power that companies like HP and Intel are bringing to market — and Katzenberg praised them highly — is resulting in a massive change, and we saw this demonstrated at two studios. The first was by PhaseSpace, which showcased a relatively inexpensive tool to do motion capture and translate the result into a movie or commercial.

This is a process that typically costs US$1,000 to $10,000 a second, and they intend to get this cost down to or below $10 a second. Once an environment is created and characters are inked, then actors can put on electronic suits and move in the artificial environment. This is kind of how they did “Avatar,” but what was demonstrated was done with off-the-shelf HP workstations running Intel’s new Xeon processors rather than ultra high-end hardware.

The end result was real-time virtual reality, though only the director could see the true virtual world through his virtual camera. But think of what you could do if you put head-mounted displays on the actors, rather than seeing green screens, marks on the stage, and boxes where screen elements are (and having to remember which box was a tree, a wall, a car etc.) they could actually see the landscape, live the role, be in that virtual world.

This would be amazing for actors, but what if you could enter the scene yourself?

We are probably within a decade of being able to use similar technology to step into these virtual worlds ourselves. Nearly a decade ago I got hooked on a game called “Virtual World,” which evolved into “Battletech Firestorm”. When I did it, you went to a dedicated arcade that was custom outfitted to look like a staging area for mech pilots (big robots with guns, missiles etc.), and you would then go into battle against each other or in teams. Back then, interestingly enough, the technology that made it all work was from Apple. Why this is interesting is Apple really wasn’t known for gaming, yet this was one of the best games of its time. You played in cockpits that added to the reality, which have since, apparently, improved a lot. Graphics were good for the late 90s, and it was a great experience.

Now imagine the same thing but with photorealistic graphics, destructible interactive landscapes, and real-time rendering of HD quality battle scenes. It would be like living a movie and there could be two modes, one that is used for movies and storytelling, and one that is used for gaming, and people doing the one could find themselves on TV in a virtual reality show. Game watching has been around for awhile on the Web; the most famous is, of course, Leeroy Jenkins on “World of Warcraft,” which I think speaks to where reality TV could go in virtual worlds. While none of us would want to play with Leeroy, watching him play with others could be damned entertaining.

Wrapping Up and Adding Nvidia

While the event was sponsored by HP and Intel, the vendor not in the room that got a ton of praise was Nvidia because it was its graphics cards in the machines being highlighted. Given the technology is heavily graphics-oriented, Nvidia also deserves a ton of credit for helping move us from the engaging movies of today into the virtual worlds of tomorrow.

A real Holodeckis coming, people; I saw the first big steps last week. Now it’s only a matter of time before someone figures out how to get us out of our reality and into another even more amazing virtual world. What HP, Intel and Nvidia are now doing is truly training dragons — in a few short years, you and I will be able to ride them. I can hardly wait.

Product of the Week: Kindle DX

I’ve had a Kindle since the beginning and have one of each version. I like the DX best myself, because it is larger and with large print — easier to read in low light — you can read more and flip pages less. I’ve been chatting with a lot of Kindle fans of late and many, including me, won’t be giving up our Kindles for an iPad.

This is because while the Kindle won’t do anywhere near as many things as an iPad does, it is a better reader, and we have gotten hooked on reading with it. It might be nice to use the device to browse the Web and watch videos, but we don’t want to damage our reading experience — or our eyes — by reading on an LCD screen for long periods of time. 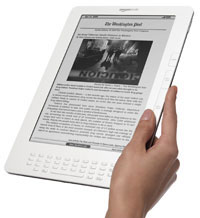 This was always the Microsoft problem. Often, the Microsoft product did more things, but the Apple or Palm product — back when Palm was a power — did the few things you wanted them to do better. Apple’s iPad does a lot of things, but as this video showcases, it also has a number of initial painful shortcomings. You can buy up to three Kindles for the price of an iPad, and they come with lifetime wireless. I think folks sometimes need to be reminded that just because it’s new and from Apple, it isn’t initially — or even eventually — for everyone.

There are choices. For instance, I bought a 46″ TV and the wonderful Sony camera I showcased last week for less than a fully configured iPad. Now the second generation iPad and 3rd generation Kindle will likely be closer to this and suddenly my choice will get much harder.

Because my Kindle is the one tech product that goes with me everyplace I go and the iPad can’t yet replace it, the Kindle DX — the one I like the best — is my product of the week.