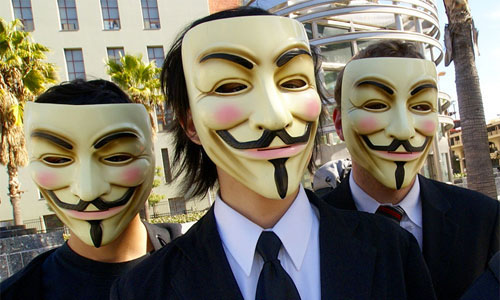 ISIS has rebuffed the declaration of cyberwar Anonymous issued on Sunday.

“The #Anonymous hackers threatened in new video release that they will carry out a major hack operation on the Islamic state (idiots),” reads a message posted Monday in a Telegram channel believed to be affiliated with ISIS hackers.

“What they gonna hack,” it continues. “All what they can do is hacking Alansar twitter accounts, emails etc.”

The message includes a list of tips to counteract Anonymous’ hacking attempts.

Anonymous issued its declaration of war following last week’s terrorist attacks in Paris, in which 129 people were killed and hundreds more wounded.

“The war has been declared,” a person with a hood and a Guy Fawkes mask says in the Anonymous video. “Prepare yourselves. These attacks cannot remain unpunished. This is why Anonymous from all over the world will hunt you down. Expect many cyberattacks.”

Anonymous on Wednesday tweeted that it has taken down 5,500 Twitter accounts affiliated with the militants since beginning Operation ISIS.

Anonymous also posted the details, including a physical address, of a person it claimed was an ISIS recruiter in Europe, according to the Independent.

However, Anonymous’ track record of identifying extremists is spotty, the paper cautioned.

“The ultimate thing Anonymous could do that would be effective would be to ID people with an affinity to ISIS, but that could have bad consequences” said Richard Stiennon, chief research analyst at IT Harvest.

“They could ID the wrong people,” he told TechNewsWorld. “Hackers do that all the time.”

Anonymous could have an impact on recruitment efforts, since a large measure of ISIS recruiting is done through websites.

“Anonymous could block those websites. It could deface them. It could interfere with the servers being used to host those websites. So they could do quite a bit harm to the recruitment efforts of ISIS,” Borg told TechNewsWorld.

“Anonymous, unlike government agencies, isn’t going to be shy about causing a certain amount of collateral damage to achieve what they want, so they can be more effective than anyone official,” he added.

However, there are those who discount the impact of any war Anonymous could wage on ISIS.

“They’ve never had much in the way of technical skill when it comes to hacking,” he told TechNewsWorld.

One of the group’s weapons — taking down Twitter accounts — is a weak one, he noted. “If someone takes down a Twitter account, how long does it take to get one back up? It’s an inconvenience at best.”

Anonymous’ war on ISIS could do more harm than good for the people for whom they’re seeking retribution.

“There are counterterrorism operations around the world monitoring much of the communication of terrorists, and Anonymous could disrupt those activities and at the worst, damage them,” said IT Harvest’s Stiennon.

However, any damage Anonymous could do might be worth the risk, maintained the Cybersecurity Consequences Unit’s Borg.