Around a fifth of the Sun-like stars in the Milky Way are orbited by Earth-sized planets capable of sustaining life, suggests a study of data obtained by NASA’s Kepler spacecraft and the W. M. Keck Observatory.

Those planets — between Earth-sized and twice as large — are orbiting their stars in the so-called habitable zone — that is, the range of orbits that would permit liquid water to exist on the surface of a planet.

The researchers published their analysis in the Nov. 4 issue of Proceedings of the National Academy of Sciences.

“We haven’t found Earth 2.0 quite yet, but I think it’s there in the data,” Jill Tarter, holder of the Bernard M. Oliver Chair at the SETI Institute, told TechNewsWorld. “I think this is a big milestone.” 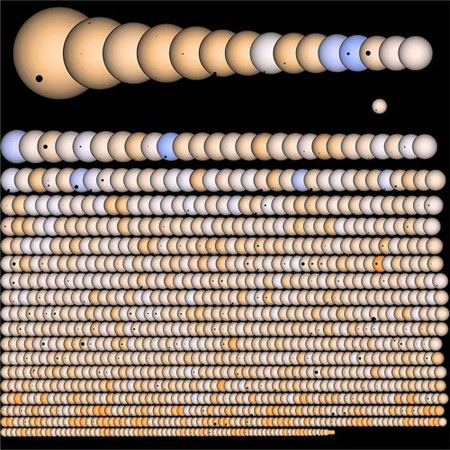 From the first three years of Kepler data, more than 3,500 potential worlds have emerged. Since the last update in January, the number of planet candidates identified by Kepler increased by 29 percent and now totals 3,538. The analysis was led by Jason Rowe, a SETI research scientist. (Image: SETI)

The nearest Sun-like star with an Earth-sized planet may be just 12 light years away. While that’s a considerable distance by human standards, the star can be seen with the naked eye.

“These findings are telling us that small planets are common. They’re literally everywhere,” Sara Seager, an astrophysicist at MIT, told TechNewsWorld. “Initially we found stars around planets that were relatively nearby to Earth, giant planets that we studied in detail. Then we moved to the statistical approach with Kepler. Kepler’s job was just to do statistics on a large number of stars — how common are planets at different sizes? Now, we hope to have a return to studying individual objects.”

The findings emerge as Kepler reaches the end of its four-year mission to search for planets that cross the paths of their stars. This causes a slight change in the star’s brightness that in some cases can be observed. Kepler has monitored the brightness of 150,000 stars, and from a study of the first three years of data it collected, more than 3,538 candidate planets have emerged. Researchers still have a year’s worth of data from Kepler to analyze.

Scientists recently used twin 10-meter telescopes at the Keck Observatory on Mauna Kea, Hawaii, to create spectra of as many stars as possible to calculate the brightness of each and measure the diameter of the planets that cross in front of them. The scientists defined a “habitable planet” as one that is up to double the size of Earth and that receives from one-fourth to four times the amount of light Earth gets from the Sun.

Though the Keck researchers found just 10 planets deemed “Earth-like” in that survey, they factored in a number of possibilities that could result in their not seeing evidence of an Earth-like planet, such as the planet orbiting its star in a way that would keep it out of the line of sight for observation.

“When you use a radio telescope to look at a star Kepler has told us has a planet, even if that planet isn’t in the habitable zone, or isn’t Earth-like, you look at the whole planetary system at once,” Tarter pointed out. “So it could have planets that Kepler hasn’t discovered yet.”

Around 20 percent of the 200 billion stars in the Milky Way galaxy are deemed Sun-like. If 22 percent of them are orbited by Earth-like planets, that means we could have 8.8 billion such planets in our galaxy.

Narrowing the Search for Life

The findings are significant for NASA, because future missions will attempt to take pictures of planets with the potential to sustain life. The size of the telescope the agency builds depends on the distance to those planets — having a large number of such planets close by makes Kepler successor missions a touch simpler.

“As we learn more, we will use that information to prioritize our searching,” SETI’s Tarter said.

“In one sense, you’d like to keep it as open as possible, because we don’t know what’s absolutely necessary for life or intelligent life. Maybe our biases are wrong. Maybe we’re the odd man out, so to speak. You don’t want to be completely prescriptive, and say ‘we’re only going to look at this kind of planet.’ Our eggs aren’t all in one basket, but we’re being informed by what Kepler’s finding,” she explained.

“Kepler needed to look really far away, because it needed 150,000 stars all in one place,” MIT’s Seager noted.

“Our next step is to try to find planets that are around stars much, much closer to Earth than the Kepler stars. Our next plans are to launch a space telescope called ‘TESS’ (Transiting Exoplanet Survey Satellite, scheduled for a 2017 mission),” she said.

“Essentially, this next-generation Kepler will look all around the sky. It won’t just look in one place, but it will study the whole sky,” added Seager. “It will find the Earth-like stars that are closest to us that we can follow up with a different space telescope to look for signs of life in the atmospheres.”