Lark on Monday introduced its new Larklife wristband, which is designed to track not only the number of steps taken or calories burned, but also food consumed and even hours of sleep.

The principle behind the device is that getting in shape and staying fit isn’t just about the time spent working out — it’s what you do the rest of the day as well. While there is no shortage of devices that can track your heart rate, calories burned and time spent exercising, Lark aims to make fitness monitoring a constant part of a user’s life. 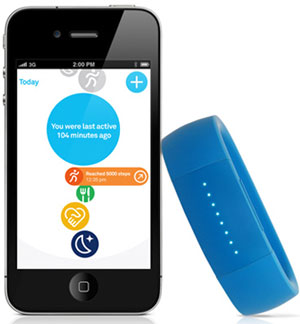 Lark isn’t alone in producing its so-called life monitor, as other fitness innovators, such as Jawbone and even Nike, have created wearable wrist monitors. The Larklife goes a step further, though — not only in tracking every step you take and every move you make — but by providing integration via an app with the user’s iOS device.

This level of tracking is something that was previously not available to most consumers, and given health concerns in the United States, it is possible that technology could in some ways reinvigorate the fitness revolution.

“Absolutely, in our smartphones we have a variety of sensors that can be applied to use fitness metrics, and with the addition of a heart rate monitor, we can track so many factors — that just wasn’t possible a few years ago,” said Rob Enderle, principal analyst for the Enderle Group. “It has allowed these companies to roll out a number of solutions so that you get a rudimentary personal trainer for the cost of the sensor. It could be a fitness revolution all over again.”

Technology has long been used as a way to improve fitness. Decades before Jane Fonda introduced her workout tapes on VHS, Jack Lalanne offered exercise tips on TV. The VHS craze was followed by DVD workouts that offered more interactive options. More recently, video games and interactive simulations tackled health and fitness. But what was missing was the ability to track activity after the workouts stopped.

Sleep habits, for example, are now seen as important for overall health and well being.

“Larklife is both a daytime and nighttime tracker in one,” said Julia Hu, founder and CEO of Lark. “The nighttime band is meant to be more comfortable — pajamas for your wrist, if you will.”

The potential key to the success of these devices is really the ability to motivate. While Lalanne could encourage TV viewers to get off the couch and a cycling simulation can encourage users to be competitive while working out, Lark is meant to be an all-the-time motivation tool as well.

“Indeed, it has gotten to that point. One of the biggest innovations Larklife is making use of is the ability for the sensors in the armband to talk to the phone all day long, in nearly real time,” Lu told TechNewsWorld.

“Coaching really isn’t possible without instant feedback,” she explained. “Telling a user they did a great job doesn’t encourage that behavior as strongly when it happens six hours after the fact.”

That motivation is what could keep users going and not give up their exercise routines — and even keep them from straying from a healthier lifestyle.

“The exercise programs in these devices are about measuring progress,” said Enderle. “Because much of progress in exercise happens in small amounts, people tend to give up as they don’t see results. These devices instead allow people to actually see that they are making progress, and this could motivate them.”

The flip side of this is that constantly seeing calories burned, time spent working out, steps taken, distance, etc., can lead to overload — and even be discouraging at times. Too much information can be hard for some people to manage. It can make working out feel like much more work.

“It really depends on how it is applied,” said Enderle. “Too much information can become a chore. That is why it is necessary to make this simple. To keep people on the path, don’t throw it away with one binge. Devices like this have the ability to make it easier to track your progress.”

The final equation in this is going to come down to a matter of trust. While many people make want to be healthier and get fit, it will come down to whether they expect too much from a wearable device — and more importantly, whether they even believe such a device can provide the answers.

“Most people are not really ready to strap themselves into a machine that constantly second-guesses their behavior,” said Roger L. Kay, principal analyst for Endpoint Technologies Associates.

“In principle, the idea is interesting,” he said, “but in the world of practical realities, this is an area where technology overreaches.”