Leap Motion Gets Your Hands in the Game 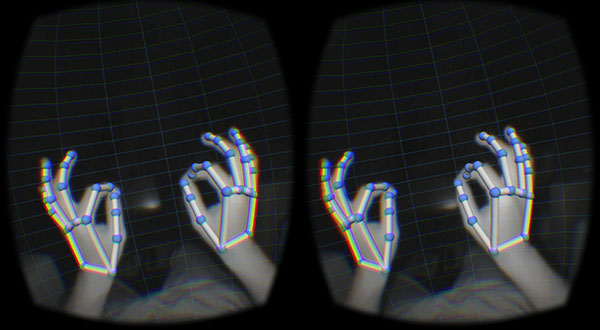 Leap Motion last week announced a virtual reality headset developer mount for Oculus Rift and a new API that together will take the VR game to new heights.

The API feeds raw infrared imagery straight from Leap’s sensors to the controller on the headset, giving users a real time view of the environment.

The API expands the tracking space to any direction the user is facing.

Its field of view exceeds that of existing VR displays so users can track their hands before they come into their field of vision — effectively expanding their peripheral vision with the headset on.

The mount, which lets devs attach and remove the Leap Motion controller from a VR headset, is available from the company online for US$20.

The API “closes the gap between Oculus Rift and Project Morpheus, and now Oculus reaches parity with, if not surpasses, what Sony is able to do with Morpheus,” said Lewis Ward, research director for gaming at IDC.

Until now, the Morpheus VR headset let users know where their hands were, whereas Oculus did not.

“It’s essential that if you’re going to do an immersive VR experience, you have your hands in there and being represented in real time,” Ward told TechNewsWorld.

Doing away with the need for a handheld controller is a big boost for gamers, Eric Smith, an analyst at Strategy Analytics, told TechNewsWorld.

“One of the main challenges VR faces is the same that 3D TV faces — there’s a lot of bulky equipment you have to put on to use it,” Smith said.

“Imagine being able to grab onto a virtual object with no intermediary,” Smith mused. “Things as simple as opening a door — very mundane, but it’s those very realistic experiences in VR that allow you to lose yourself when you’re in those games.”

The API “lets Oculus developers bring natural hand motions into the game,” Ward pointed out. “It opens up the possibility for manipulating these virtual worlds to a much greater extent than having to hold a controller.”

“There’s some enthusiasm among developers for creating whole new experiences from an entirely new perspective,” Smith remarked. “This changes the game for developers.”

VR “is a green field for developers,” he added. “They’re able to put their stamp on something that’s coming to the fore now.”

Other Uses, Other Places

It’s not just gamers and game devs who will get a kick out of advances in the VR industry such as Leap’s new API.

“This type of imaging will probably go further than gaming,” Susan Schreiner, an analyst at C4 Trends, told TechNewsWorld. “There are real implications for this in medicine, health and certain types of businesses.”

The Icahn School of Medicine at Mount Sinai is the first in the United States to use a virtual reality simulator for training.

The Leap Motion controller was combined with the Oculus Rift and Google Maps and demoed at Google I/O 2013.

“We’re now into this 3D world in so many different ways that I don’t know what the permutations of this will be,” Schreiner said. “This is going to be an evolutionary type of technology.”