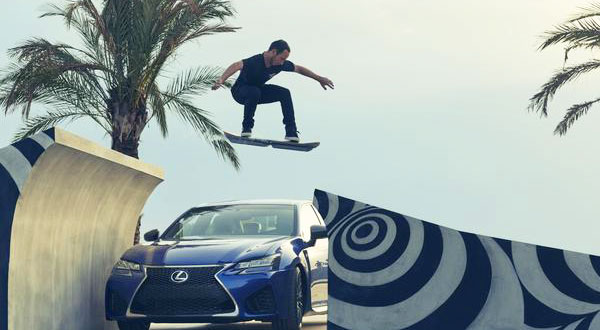 Lexus on Tuesday presented the final video reveal of its Hoverboard as part of its Amazing in Motion campaign.

Set to the sounds of Rudimental, pro skater Ross McGouran cruises around a Barcelona skate park on the Lexus Hoverboard.

“I’ve spent 20 years skateboarding, but without friction it feels like I’ve had to learn a whole new skill, particularly in the stance and balance in order to ride the Hoverboard,” McGouran said. “It’s a whole new experience.”

The Lexus Hoverboard may not require 1.21 gigawatts to function, but it is truly bleeding-edge technology. A series of magnets embedded just below the surface of the specially built skate park give the Hoverboard its lift.

The Hoverboard itself is fitted with magnets and nitrogen-cooled superconductors that are kept at -197 degrees inside two reservoirs called “cryostats.”

“The magnetic field from the track is effectively ‘frozen’ into the superconductors in the board, maintaining the distance between the board and the track — essentially keeping the board hovering,” said Evico CEO Oliver de Haas. “This force is strong enough to allow the rider to stand and even jump on the board.”

Running With the Idea

The Hoverboard was conceived and fabricated for the Slide segment of Lexus’ Amazing in Motion campaign, a set of global projects the company undertook with the intention of showcasing the brand’s imagination, innovation and design excellence.

About 18 months ago, Lexus called on IFW Dresden and Evico scientists who specialize in magnetic levitation to help develop the board, and they reached out to McGouran for testing.

“We here at Lexus constantly challenge ourselves and our partners to push boundaries and realize the impossible,” said Toyota spokesperson Leigh Anne Sessions. “That determination, combined with our passion for design and innovation, led us to take on the Hoverboard project.”

Although few would argue that the concept isn’t intriguing — at the very least — Lexus, Toyota’s luxury arm, has no plans to market the Hoverboard, Sessions told TechNewsWorld.

However, the technology is not proprietary, she also noted.

Holding Onto the Wheel

Still, it could be a long while before hoverboards break into the mainstream, and mag-lev parks begin popping up in metro areas.

The likelihood of near-term adoption of a system based on the technology Lexus developed is low, said Rob Enderle, principal analyst for the Enderle Group.

“You both need a very special and expensive surface, and a supercooled superconductor solution in the board — and even then, you’d likely have more fun with wheels,” he told TechNewsWorld. “It’s like skateboarding on ice. The skill requirement is very high — and note, they don’t actually show anyone turning, which is problematic.”

Lexus’ research and development of its Hoverboard was clearly a significant investment, but the return it was hoping for was likely attention, according to Enderle.

“It got people talking about Lexus,” he said. “Superconductors don’t yet have a practical application in transportation — they don’t even use them in maglev trains. But if you want folks thinking of you as a technology innovator, showcasing a hoverboard that actually works kind of does that, even though it isn’t remotely practical.”