Last week, I tried to come up with some epic things I would like to think I’d do were I given six weeks to live — a rumor that’s been floating around about Steve Jobs — and was as insanely wealthy as he is. The purpose was to focus on something other than the end we will all eventually share.

I’ll close with my product of the week: a laptop that likely is the closest to an Apple product sold into business by a company that isn’t Apple — the new ThinkPad T420, a key part of Lenovo’s new business line.

The Next Steve Jobs

We have a TV show called “American Idol.” Why not create one called “The Next Steve Jobs”? Running Apple is a job that many people are trained to do, but the one thing that will be immediately lost and very hard to replace is Steve Jobs as the face of Apple.

If you’ve been to events that didn’t have Jobs, or to events held by other vendors, they simply aren’t very exciting. At one recent non-Apple event for a new tablet, bloggers were actually commenting that they would like to see sharks drag the speaker off stage because he was boring them to death.

Most CEOs suck at pitching products, and you often get the sense that they wouldn’t even use them. This is one of the things that helped make Apple special. Steve seemed to actually care about and use the products he pitched. More than that, it was clear that with the exception of Apple TV (he is not a TV fan), he personally assured the product was amazing.

Why not have contests every four years to find an Apple spokesperson who can create this same magic? He or she could present old and new Apple products to judges who could even be from Jobs’ own family or Apple’s board, and the winner would be “The Next Steve Jobs” or “Virtual Steve Jobs,” an honorary title.

After four years, the star spokesperson would be offered a different job at Apple and actually have the chance of working to become CEO over time by starting as an executive aide while the next candidate was chosen.

You might actually get another fully capable Steve Jobs that way. The show would be a huge showcase for Apple products, and Apple would maintain the unique capability of being able to pitch products without boring folks to death.

This would be a book of what Steve Jobs thinks Apple should build over the next 100 or so years. With new products every five years, it would contain 20 secret ideas that would only be trotted out when a similar product was released to market. Marketing would contain the concept that the idea came from the Steve Jobs Codex — a book that only the CEO of Apple was allowed to read.

For the next 100 years, Apple would then have the ability to create the impression that at least two products a decade had come, at least partially, from the mind of Steve Jobs. If you got creative, you could likely extend this to 1,000 years without too much additional work, since all you need to do is create the impression that the idea originated from this book and, therefore, from the mind of Steve Jobs.

I imagine there quickly would be rumors of more than one book, or a secret library maintained by Jobs’ heirs that could be used to extend the concept indefinitely. Once again, the result would be to make the idea of Steve Jobs immortal. His not- so-invisible hand would be on Apple forever.

We know about the Nobel Prizes, which immortalized Alfred Nobel, resulting from a secret and mysterious will that only became known after his death. Why not a similar award from Steve Jobs focused on those who bring forth magical Apple-like products?

One category would be open only to Apple employees, and others would apply only to products outside of Apple’s chosen industry, minimizing the chance that an award would go to a product that competed with Apple.

The award would recognize the combination of design, user experience, and marketing excellence by Apple standards, and it would serve to focus the targeted industries on practices that would make them more profitable, more successful, and with demonstrably more-satisfied customers.

This award would be given every three to five years and be funded like the Nobel Prizes, so that the annuity would continue virtually forever. It would extend Steve Jobs’ reach far beyond his life and touch billions through the designers and products receiving the award.

It would also continue to showcase Apple as the place where excellence is born and help focus Steve Jobs’ successors on those things that Jobs used to do to make the company great. Jobs’ influence on the technology market could be extended indefinitely this way, in theory, using Alfred Nobel’s example.

Walt Disney lives on through the parks, PT Barnum lives on through the circus, but they really don’t reflect the ideals and concepts that these great men were most known for anymore. Apple likely will drift quickly away from Jobs unless efforts are made to extend his vision. These are my ideas on how to do that, but I doubt they are exhaustive. What do you think should be done to make Steve Jobs immortal?

Steve Jobs had two famous failures, both targeted at business: the Lisa and NeXT Computer. Since then, he pretty much left business alone — but if you look back at NeXT, you’ll see an elegant black PC with sharp lines and a simplistic beauty.

The ThinkPad has always had similar lines, and the product line has always represented the pinnacle of quality — customer satisfaction — and if you were to ask what most analysts carry, you might find it’s a ThinkPad. 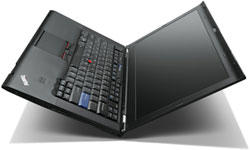 The most popular ThinkPad is the T series, and the latest, just released, is the T420. It can be extended from 20 to 30 hours of battery life, and it passes 8 MilSPEC durability tests. It has an optional Nvidia Optimus graphics system, a lighted keyboard, and the most tightly controlled user experience of any PC in the market.

This is the first laptop to capture the new UL Gold rating, making it one of the greenest PCs in the world. With a starting price of less than US$600, this product is an interesting alternative to an iPad for those who want to do more but don’t care about touch.

If Apple were to build a Windows PC following Steve Jobs NeXT design language, the closest thing in market for business would be this ThinkPad.

Because this ThinkPad showcases that excellence can exist beyond Steve Jobs and thus confirms his vision could outlast him, the ThinkPad T-420 is my product of the week.