Meg Whitman vs. Tim Cook by the Numbers

Last week was an interesting week. Apple announced what appears to be a penis iron in the new iPad, and folks are burning through their monthly 4G data plans in a few hours. Tim’s having his first Antennagate moment, and Steve Jobs he isn’t.

On the other hand, Meg Whitman announced her first major restructuring since taking over HP, and on paper it not only looks impressive, but also is reminiscent of what Carly Fiorina attempted to do in a lot of ways. Fiorina was considered a strong visionary — she just wasn’t good with people and couldn’t execute. Whitman appears to have Fiorina’s vision and can execute, which bodes well for HP.

Ironically, the stock market continues to reward Apple and punish HP, which suggests the market remains consistently out of step with reality.

I’ll talk go deeper into that and close with my product of the week: another book on Apple by Carmine Gallo. The Apple Experience reveals the secrets of building insanely great customer loyalty. You might want to read this book fast. The way Cook is going, that fierce loyalty could soon become history.

Both CEOs are new to their roles, and their companies are in vastly different places. Steve Jobs left Apple at the top of its game but also pretty solidly connected to Steve, who played three critical roles in the company. He balanced the different interests (engineering, design, finance); he was the super user who assured no product went out that wasn’t acceptable to customers; and he was the primary pitch man.

Meg Whitman stepped into an HP mess as Mark Hurd had so aggressively cut the company there was little more than a shell left in some places. In addition, there was an internal top executive (Todd Bradley) who was actively and publicly lobbying for her job, and Leo Apotheker, the interim CEO, had just completed making several catastrophic mistakes, killing off (granted, he may have been set up) the US$1.2 billion Palm acquisition and possibly overpaying massively for several additional acquisitions.

While Cook should have been able to hit the ground running, his position at Apple was to do the things Steve didn’t want to do and to never be a threat to Steve, which means he likely is everything Steve isn’t — yet he is trying to fit into a spot custom designed for Steve. Talk about your round peg in a square hole. Whitman jumped into a train wreck in progress and immediately had to move to triage in order to stabilize the patient.

This isn’t to say both roles aren’t difficult. Tim may have been set up to fail even though the company was operating at a very high level of competence, while Whitman had to figure out who to trust and where the bodies were buried before she could even move.

So what we saw last week from Whitman was by the numbers. Like Carly, she has consolidated HP’s voice under people she can trust so she can craft a consistent impression of the company. This takes most marketing and communications responsibilities to the corporate level and should result in a vastly more consistent public image for the company.

She has consolidated much of the true power under David Donatelli and focused it away from technology and onto the customer set. This will allow him to better craft solutions that are designed to appeal to that defined customer set, and he owns product through sales.

Whitman had already placed her head of software, which is her fastest-growing and most-profitable unit (in terms of percentage) and made what likely is the company’s biggest shift — from thin-margin hardware to a tighter focus on thick-margin software. This is consistent with what IBM did some time ago but with tighter focus on the two very different skill sets.

Prior to the reorg, Whitman’s three problems were Printing and Imaging, Personal Technology and Todd Bradley. The two divisions appear to be in decline, and Bradley is the executive most likely to cause problems for her because he desperately wants her job. It is believed he was instrumental in creating one of the big HP problems that got Whitman’s predecessor fired.

Now those two units are merged under Bradley’s leadership. This new organization will be far easier to spin out, should Whitman need to eliminate all of these problems in one pass. And the complexity of the new entity should keep Bradley out of her hair for the foreseeable future, regardless. Elegantly played.

Cook has been increasingly compared to Jobs and found wanting. His last two product launches weren’t very exciting, and the new iPad appears to have serious problems. People have been writing to tell me they are returning theirs.

The problems range from poor WiFi reception and WAN data plans that run through their monthly allocation in hours, to the very high temperature that the iPad operates at, which Consumer Reports says could cause burns if held for a long period — like, say, if a child were playing games. Let’s just say when I get an ad about a product that will make me longer and harder I’m not expecting to get an iron, yet this Apple appears to be designed to take the creases out of my private part.

In short, for a device that typically is held for hours to consume online content, it sucks at being wireless — and it could burn you if used that way. Apple’s initial, and poorly thought through, response was “it is within spec,” which means that all of these problems were designed into the iPad. Maybe they are features intended to make us use the device less and get a life, but I doubt that was the intent.

But back to Steve Jobs’ three critical roles. One was as a proxy for the consumer, and this new iPad is heavier and has critical issues for users (connectivity and heat), which suggests someone didn’t fulfill Jobs’ quality-assurance role. Apple can certainly ride this out, but it does showcase that this one aspect of Jobs’ execution remains missing.

We already know Cook can’t present like Steve Jobs, and it is as yet unclear whether the proper balance is being maintained between design, engineering and finance. With this device alone, you could argue it is not a good balance, based on these problems (best to wait for the newer iPad).

Wrapping Up: The CEO Job Sucks

While Apple is outperforming HP, Whitman is clearly a bigger asset to HP than Cook is to Apple. She is clearly improving the mess she started with, while Cook appears to still be doing the job he did at Apple while Jobs was alive and leaving Jobs’ unique duties unstaffed.

Momentum will only carry Apple so far. It has a premium brand, and people expect a premium experience. If they don’t get it, the lines to buy their products will get ever shorter.

HP still has a long way to go before the company truly digs out, but you want to see progress in the right direction. In one move, Whitman has provided a mechanism to improve HP’s image, put her problems in one bucket, and set up a mechanism to throw the bucket away should she later need to.

It should be pointed out that given HP’s position, most roads lead up, while Apple is at a peak looking down at other companies, which suggests most of its roads lead down. Whitman is operating by the numbers, while Cook doesn’t seem to fully understand that critical things Steve did for Apple are currently not being done.

Product of the Week: The Apple Experience by Carmine Gallo

This is another in a list of books by Gallo that I think every consumer product manager and marketing executive should read. Apple remains the most valuable company in the world, and it still has the most loyal customers. 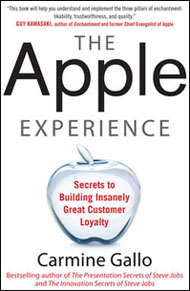 It has historically done this through Steve Jobs personally ensuring that its products met his demanding needs, that the stores were the best in the world, and that the customer experience was unmatched.

In fact, a secret is that the Apple hardware often really isn’t that great — it is the overall wonderful experience that makes the company so successful.

The Apple Experience collects a series of insights from Jobs’ world- leading practices to exemplify the benchmark in customer experience. Given that this is increasingly said in a historical context, I think it would do well for Apple executives to read this book as well, so they might stop degrading an experience that made Apple the most highly valued company in the world.

This book is the magic manual about Apple excellence — and when Apple is operating at its peak, there is no company better in technology. As a result, Carmine Gallo’s book, The Apple Experience, is my product of the week.