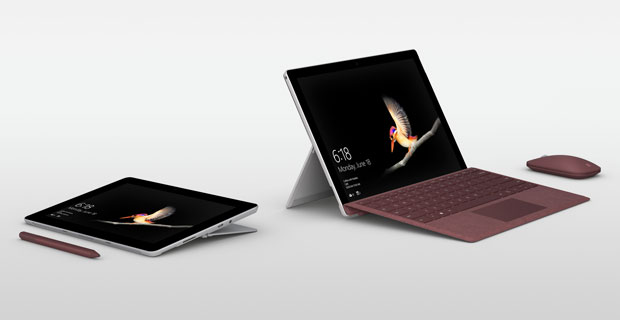 Early reviews of the Microsoft Surface Go two-in-one, which hit shelves on Thursday, mainly have been positive.

“It’s a tiny wonder of a computer — with a few flaws — that can do more than I would have given it credit for before I tried it,” wrote Dieter Bohn for The Verge.

The Surface Go “is simply a very small Surface, with everything that entails,” he said. “It’s a little less powerful and probably not the right thing to be your only computer, but as a secondary machine for Windows users, it could have a real place.”

The Surface Go is a 2-in-1 laptop that’s “a very, very good one that jumps up to being exceptional when you consider its price versus other devices of the same ilk,” wrote Alex Cranz for Gizmodo.

The Surface Go is the device consumers who “want a solid Windows machine that’s primarily for browsing, emailing and word processing need to buy,” she noted.

Battery life is rated at up to 9 hours.

The Surface Go runs on an Intel Pentium Gold processor.

It uses Windows Hello facial sign-in and has TPM 2.0 for enterprise security.

It has a 5-MP front-facing camera with 1080 Skype HD video that’s used for facial authentication, and an 8-MP rear-facing autofocus camera with 1080p HD video, one microphone, and 2W stereo speakers with Dolby Audio Premium.

The Surface Go comes with Microsoft Office 365 Home on a 30-day trial basis.

The Surface Go has an ambient light sensor, accelerometer, gyroscope and magnetometer.

Its weight starts at 1.15 pounds not including the Type Cover, which is sold separately. The Surface Go comes with a 30-day return policy, 90 days of free tech phone support, 12 months of in-store support and tech assistance, and one free training session.

“The price is a clear advantage as Microsoft attempts to crack the mid-market with a competent detachable,” noted Eric Smith, director of connected computing at Strategy Analytics.

“Unfortunately, this comes at the expense of processing power without significant battery life improvements, cellular chipset, or other advantages Microsoft has been touting for its Always Connected PCs,” he told TechNewsWorld.

The entry-level Surface Go “reportedly has performance issues while browsing the Web, which doesn’t compare favorably to most competitors in that price tier,” he said, but added that it could be “a perfect device” for students.

Comparisons With the iPad

The Surface Go is “almost as light as an iPad but can also run most of the Windows apps you need,” wrote Devindra Hardawar for Engadget.

It is “an intriguing option as a secondary device,” he said.

The Go “is the first Surface that can actually take on the iPad,” Hardawar maintained. “It’s impressively thin and light, while also being a fully fledged Windows PC.”

The iPad “is better for entertainment — but if that’s what you want, I’d suggest the large Amazon Kindle is a far more economical choice than either,” said Rob Enderle, principal analyst at the Enderle Group.

“This Surface Go is far closer to what people seem to want in a small product that’s more focused on productivity than the iPad has yet been able to deliver,” he told TechNewsWorld.

“While the iPad is likely to offer the better tablet experience, the Go runs Windows 10 S or 10 Pro, both of which support more traditional PC applications,” observed Lauren Guenveur, senior research analyst for devices and displays at IDC.

That means it likely will offer a better PC experience, she told TechNewsWorld.

“In addition, with Windows 10 security and encryption features, IT buyers may find the Surface Go appealing for workers that need either more portable or secondary devices,” Guenveur said.

The Surface Go earned praise for product quality, with reviewers noting its superiority to other inexpensive PCs in terms of design and finish.

“It’s rare to have a device at this price with such a premium feel,” Guenveur remarked.

On the downside, the CPU isn’t up to handling large applications such as Photoshop and games, or loading big PDFs or complex Web pages with embedded videos, reviewers noted.

Another issue is the paucity of apps in the Windows Store. The Surface Go runs Windows 10 in S mode, which restricts it to using Microsoft’s Edge browser and Microsoft apps.

Still, the upgraded version could run eight or 10 lightweight apps simultaneously, together with a dozen Edge browser tabs, noted The Verge’s Dieter Bohn.

Microsoft has positioned the Surface Go as an enterprise device, emphasizing its security features.

Microsoft “did see fair success with the Surface 3 in the enterprise, and this would be a timely replacement for those devices,” IDC’s Guenveur said.

However, “the modest inner workings could dampen an employee’s ability to use the device as a daily driver, depending on the vertical they work in,” she added.

An ARM-based product “is coming under the ‘Always Connected’ effort, which will likely be a stronger enterprise product,” said Enderle, “but it’s waiting for the next-generation Qualcomm processor, the Snapdragon 1000.”

Chromebooks and small iPads, “the natural competitor to this offering, haven’t been that popular for work in the enterprise, and I doubt this will be much better,” he noted.

“It’s a stronger alternative for education, though, due to price and capability,” Enderle said. “There really isn’t much in the productivity area with this screen size. The exception has been schools and people with extreme requirements for portability, but this latter group hasn’t been well targeted with a product until now.”

Education “and perhaps millennials” will be the strongest markets for the Surface Go, he suggested, “though for the latter group, I think the Snapdragon version will be far more attractive long term.”