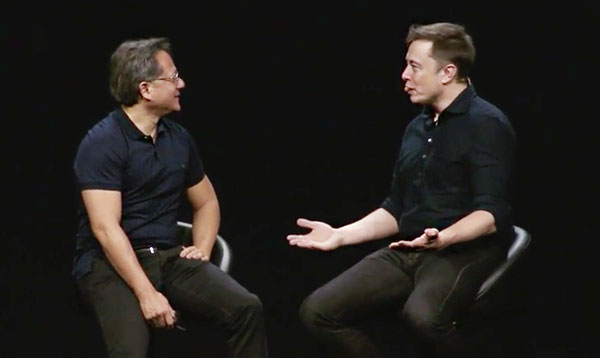 There will come a time, in a future not so far away, when it will be illegal for the average person to drive a car, predicted Tesla CEO Elon Musk.

Nvidia CEO Jen-Hsun Huang took the stage with Musk for an unrehearsed conversation about the future of cars and Tesla’s aspirations to propel its electric vehicles into fully autonomous territory.

Huang touched on Musk’s well-publicized warnings that super-sentient machines could become smarter than humans and pose a grave danger to humanity, but Musk said he was optimistic about automotive artificial intelligence, because it’s “more narrow.”

Musk expressed his enthusiasm for a future when people can do less — presumably without giving up control over the machines that take over their most tedious chores.

Motoring will become much safer when steering duties are taken out of human hands, according to Musk.

“In the distant future, I think people may outlaw driving cars because it’s too dangerous,” he said during the interview. “You can’t have a person driving a two-ton death machine.”

It’s going to take a significant amount of time to wrench the wheels out of the hands of motorists, though, because there are plenty of people who are in love with the driving experience, suggested Frost & Sullivan Research Manager Praveen Narayanan.

“[Eliminating] the human will take a lot more time, because the user has to have confidence in the car driving itself completely on all roadways, any time of the day, any weather condition, etc.,” he told TechNewsWorld.

Although Google and original equipment manufacturers have been working to eliminate human error through self-driving tech, trust is an issue, noted Narayanan.

Automated driving will be available in select Volvo cars in Gothenburg, Sweden, but both Volvo and the city’s central traffic command center can shut down automation when the weather turns bad or any other roadway threats emerge, he said.

If human drivers are taken out of the picture, a lot of things will change, Narayanan pointed out.

Will “insurance companies insure these self-driving algorithms instead of us as drivers?” he wondered.

Driverless cars will disrupt the insurance industry, prompting a hard shift in the way coverage is offered, according to Mitch Wein, Novarica’s vice president of research and consulting.

Insurances policies will switch lanes from personal lines of coverage to commercial policies, as the accountability for accidents shift from drivers to vehicles and the companies that manufacture them, he told TechNewsWorld.

“As most vehicles become driverless between 2020 and 2035, the number of personal lines providers will substantially contract. Watch out — future shock is right around the corner,” Wein warned.

As for regulating autonomous vehicles, lawmakers will mandate new rules two or three years after the industry has reached the point when driverless cars are undoubtedly safer than vehicles driven by people, according to Musk.

Right now, it’s still unclear how the regulatory environment for driverless cars will develop, observed Brandon W. Mason, PricewaterhouseCoopers senior manager and leader of Autofacts Americas. It could grow from rules established at the national or local level.

“There are multiple, complex issues that must be addressed, including safety, infrastructure and communication: vehicle to vehicle, vehicle to grid, etc.,” he told TechNewsWorld. “Market type — mature vs. emerging — will likely have an impact as well, whereas mature markets will be more likely to adopt standards early on, since they will hit a critical mass of autonomous vehicles sooner than emerging markets.”

Musk put the number of electric vehicles on the road today to somewhere around 1 percent.

It will take between 15 and 20 years to replace the current fleet of vehicles — roughly 2 billion — with EVs, and the same should be true of driverless cars, he said.

Leeway of about 15 to 20 years should give lawmakers plenty of time to pen effective legislation for driverless cars, but that doesn’t mean they will be clearcut and immune to addendums.

“Minimizing risk in terms of traffic accidents, emissions and other factors are some of the benefits being touted by advocates of autonomous vehicles,” said PwC’s Mason. “These benefits must also be balanced with existing fleet characteristics and consumer demand.”