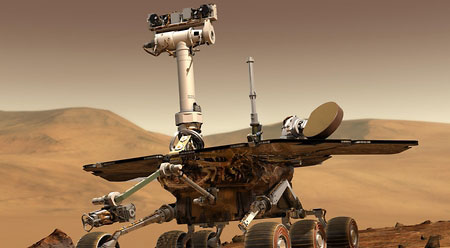 The United States National Aeronautics and Space Administration next month will reformat the flash memory of the Mars exploration rover Opportunity.

Opportunity’s been undergoing computer resets with increasing frequency — it had 12 in August alone.

Recovery from each of the resets takes one to two days, which means the rover was out of action for most of the month.

Reformatting clears the flash memory. It also helps identify bad cells and flag them to be avoided.

Prior to the reformat, NASA will download to Earth all useful data remaining in the flash memory.

It also plans to switch the rover to an operating mode that does not use flash memory. Plus, it will restructure the rover’s communication sessions to use a slower data rate, which may add resilience in case the system resets during preparatory activities.

The frequent resets caused problems with X-Band transmissions, so NASA last week sent a real-time command to convert the next several X-band passes to use the low-gain antenna.

NASA also sequenced a checksum test of the lower portion of flash to get data on the physical health of the flash memory chips in general.

The next step is to boot the rover into a mode that does not use the flash file system. That will let NASA confirm its health independently. The rover currently is power-positive with a healthy energy balance, and it is thermally stable and communicative — both over X-Band with the Deep Space Network, and through UHF relays with the orbiters.

“Systems that are very difficult to repair — like, say, those in the Mars rover — tend to have very sophisticated and multiple levels of error correction and redundancy technologies applied to them, so that you avoid as many failure situations as possible,” Danny Cobb, vice president and distinguished engineer at EMC, told TechNewsWorld.

“If they couldn’t electronically repair and update it, the rover likely would have become a nonmoving piece of history some time ago,” noted Rob Enderle, principal analyst at the Enderle Group.

Being able to perform OTA maintenance “ensures robots and other devices can stay in service far longer better, justifying the cost of flying them out there,” Enderle told TechNewsWorld. “This is critical to the success of most missions.”

Never Gonna Give You Up

Opportunity is one of two Mars Rovers that touched down on the red planet back in 2004. Spirit landed on the other side of the planet.

Spirit ran into trouble shortly after landing on Mars, losing the ability to execute any task that requested memory from the flight computer.

The problem was found to be incorrect configuration parameters in two operating system software modules that controlled the storage of files in system memory and flash memory. The rover went through a cycle of repetitive resets and flight software reinitializations.

NASA engineers had to reallocate system memory manually, delete unnecessary directories and files, and command the rover to create a new file system. They then made changes to Opportunity to prevent similar problems from occurring.

The Mars rovers “have a recovery mechanism where, if you have a perfect storm of failures where you can’t read the data any more, you may have a backup that reinitializes the state of the system and flash from scratch,” EMC’s Cobb said.

The problem with Spirit, and its solution, were written up as a case study by NASA’s Office of Logic Design.

Spirit lasted about six years — well over the 90-day life span both rovers were designed to have, while Opportunity has far exceeded that, having been in operation for more than 10 years.