Research In Motion on Monday unveiled two new BlackBerry smartphones and a voice over WiFi feature to its voice technology. 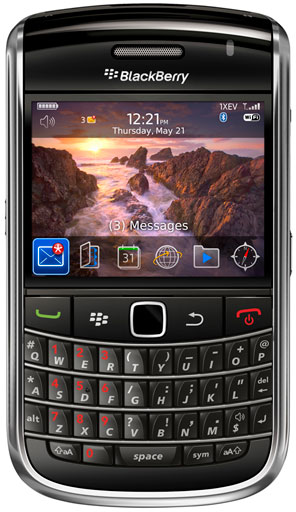 Other Pearl 3G features are an optical trackpad and a keyboard; a media player for videos, pictures and music; and dedicated media keys. It also has a 3.2 megapixel (MP) camera with zoom, autofocus, video recording capability and flash.

The Pearl 3G has a built-in GPS, photo geotagging capabilities, WiFi and Bluetooth 2.1 support. It also has voice-activated dialing, a speakerphone and support for various headsets.

The BlackBerry Bold 9650 is a global smartphone that supports 3G EVDO networks in North America and HSPA/UMTS networks overseas. It measures 4.4 by 2.4 by 0.56 inches and weighs 4.8 oz. The device has a full QWERTY keyboard, an optical trackpad and built-in WiFi so users can talk on the phone while browsing the Web or dealing with email.

The Bold 9650 has 512 MB of flash memory and an expandable memory card slot that supports microSDHC cards of up to 32 GB. It comes with a 2GB microSDHC card.

The 9650 has a 3.2 MP camera with flash, variable zoom, image stabilization, autofocus and video recording capabilities. It has an advanced video player for videos, pictures and music; a 3.5 mm stereo headset jack; and support for the Bluetooth Stereo Audio Profile.

The 9650 offers access to Facebook; MySpace and Flicker; and supports various instant messaging services. It offers a full HTML Web browser and supports streaming audio and video. The device has a built-in GPS with support for geotagging. Other features include voice activated dialing, a speakerphone and support for Bluetooth 2.1.

The Bold 9650 has a removable, rechargeable battery that supports 5 hours of CDMA talk time. It will be available in May.

Users will be able to make and receive business calls over a WiFi connection. Enterprise IT can set which WiFi networks employees can access. Network preference settings let IT prioritize the use of either WiFi or cellular for making phone calls.

The WiFi feature could be favorably received by businesses. “If you’re an enterprise user and go from campus to campus and have WiFi connectivity between campuses, you’ll save a lot of minutes,” Ramon T. Llamas, a senior research analyst at IDC, told TechNewsWorld.

“I think it’s a good response to RIM’s vast enterprise base,” he remarked. “Now you see enterprises moving towards unified communications and wanting to be connected at all times. By letting them do this while saving some money at the same time through using voice over WiFi, RIM’s scored a major coup.”

Voice over WiFi is already available on other smartphones, so is RIM late with this development? Not so, Maribel Lopez, principal analyst and founder of Lopez Research, told TechNewsWorld.

Other Bold 9650 features that could be attractive to enterprise IT are authentication (which ensures that only authorized BlackBerry smartphones have access to the corporate phone system) and incoming call filtering.

BlackBerry Mobile Voice System 5 will be available later this year.

Despite the new releases, RIM shares began falling Monday after CoCEO Jim Balsillie announced the new products. Shares started the day at over US$70 but at one point fell to $68.51.

Investors were perhaps disappointed that Balsillie had not announced a new browser or user interface.

RIM’s share price largely recovered later in the day when RIM’s other coCEO, Mike Lazaridis, spoke up about BlackBerry OS 6.

The sooner the company can implement its new software, the better, according to Lopez. “RIM will be challenged to maintain growth until it changes the browser and UI experience,” she said. “However, they have said that this will happen this year.”