Facebook on Thursday announced a major makeover of its News Feed page with an emphasis on bigger images, more user control and a recognition that more members are accessing the social network on mobile devices. 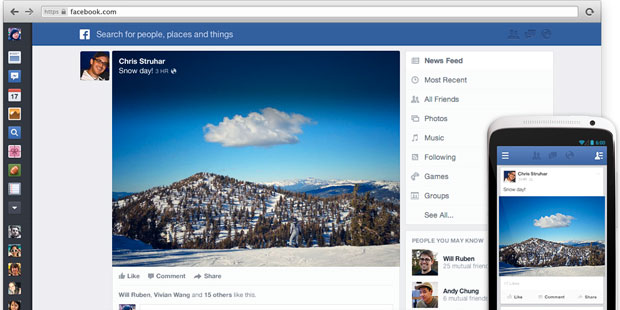 The new News Feed page has a cleaner look, offers more feeds, and has a mobile-inspired interface so users will “get the same Facebook experience across all mobile devices and the desktop,” Zuckerberg said.

The changes will “give users greater ability to control and dictate the content of the news feed,” Gabriel Donnini, data solutions engineer at Chitika, told TechNewsWorld. “This is a fantastic thing for advertisers because it will let them share their campaigns in a way that is more targeted and much more relevant to consumers.”

The company should benefit from the changes because “the more Facebook can refine content that users view, the more it can charge advertisers,” said Holly Hamann, cofounder and chief marketing officer at Blogfrog.

The redesigned News Feed will feature larger photos and will include photo albums that members share. The articles featured in the feed will have larger images and summaries that Facebook members can click on to expand for reading.

The Timeline feature will be included; users can see the photo and background information about people or businesses they are trying to decide whether to friend or like. Timeline information will also be provided about advertisements.

Content that friends have shared will be displayed prominently, with photos of those friends visible down the left side of the screen.

At the end of the day, Facebook will offer up a bundle telling users what was shared in terms of their interests. For example, they’ll get a bundle of trending stories and photos about a celebrity they’re following.

The music feed has been revamped to show what friends are listening to, where favorite artists have scheduled concerts and any new albums they have released.

There will also be a “Following” feed listing posts from pages and public figures that users like, all arranged in chronological order.

Users will be able to go from one page on Facebook directly to any other page without having to go to the Home page first. The new Newsfeed will also adjust to the size of the screen.

The changes will be rolled out starting Thursday on the Web. They will begin showing up on mobile devices over the next few weeks.

Ads will now be more precisely targeted to users, which should meet with their approval because “one of users’ top complaints is that News Feed was plagued by irrelevant advertising, irrelevant content sharing and little to no separation of brands and their connections,” Donnini said.

Link sharing will be more prominent. Users will have more control over content, but that is already offered by Google+ and other link sharing sites such as Reddit and Tumbler, he noted.

“Facebook has, in part, been pressured to revamp the News Feed due to pressure from link sharing sites,” Donnini said. “This revamp is long overdue. Facebook isn’t struggling and isn’t in its death throes, but it’s making these changes out of necessity.”

With the revamp, Facebook is moving away from banner ads, which worked when people accessed the social network on laptops and desktops. “The only place for advertisers to go in mobile is in the content itself, and that’s what Facebook is doing,” Hamann told TechNewsWorld.

“In the announcement they talked about giving marketers an opportunity to pay to be in people’s News Feeds,” she said. Since Facebook is emphasizing visual content, advertisers “will pay a premium to do video or visual-based advertising on Facebook, because it gets into the content, but it will also get to the top because people want visual content.”

With user-selected content, “advertisers stand to hold their attention far past the initial contact, which is important to both the users and advertisers,” Donnini said.