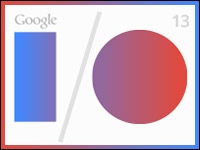 Google Cloud Messaging, which pushes data from servers to Android apps, has been made part of Google Play services.

The company also announced that, in effect, its Android and Chrome platforms would remain separate, putting an end to speculation that the two might be merged.

Google will offer an unlocked version of the Samsung Galaxy S4 smartphone running an untweaked version of Android with the bootloader unlocked. The device, which will be offered at US$650, will be available at the Google Play store.

For game developers, Google announced a new set of APIs called Google Play game services. These consist of Cloud Save, which will save the progress of games across devices, Achievements, and Leaderboards, which will be powered by Google+ Circles.

These APIs will be for Android, iOS and the Web, offering the opportunity for cross-platform gaming.

Google’s focusing heavily on games because “with Nvidia’s Shield, also based on Android, pushing the limits here, I think Google sees this as a massive opportunity to differentiate against Apple,” Rob Enderle, principal analyst at the Enderle Group, told TechNewsWorld.

Google’s announcement “meets and exceeds some of the services offered by the Apple Game Center,” said Al Hilwa, a program director at IDCIDC. “I find the offer of cross-platform services an important competitive edge to drive developers towards Android.”

Upping the Ante for Devs on Google Play

Google “wants to help developers better monetize their Google Play apps,” said Julien Blin, a directing analyst at Infonetics. “Hopefully this will help Google get on par with Apple and the iTunes App Store.”

However, this won’t really improve the lot of Android app devs, who generally don’t make much money because Android users prefer free apps.

“If this doesn’t change, they’ll only be getting better metrics on the money they aren’t making,” Enderle said.

Google’s new Android IDE, called Android Studio, is based on IntelliJ Idea, a Java IDE with advanced code navigation and code refactoring capabilities. This shows devs live previews rendered on any kind of smartphone or tablet, in different languages with real-time updates as they massage the code.

“Because of the many OEMs and screen sizes, creating apps that are optimized to the screen size has been a challenge for Android devs,” Infonetics’ Blin noted. “This will speed up the process but it won’t solve the real problem, which is the fragmentation issue.”

Another possible boost for devs is the inclusion of Google Cloud Messaging (GCM) in Google Play services. About 60 percent of Android apps use GCM, which now supports persistent connections, has support for upstream messaging, and a new API for syncing notifications. The last point drew a standing ovation from the conference audience.

“That is because, until now, [GCM] sucked,” Enderle said. “Given how important messaging is, this fix was long overdue.”

The new API for GCM “will play a key role as Google continues to move towards new devices like smartwatches and Google Glass,” Blin told TechNewsWorld, “because syncing notification across multiple devices will be critical.”