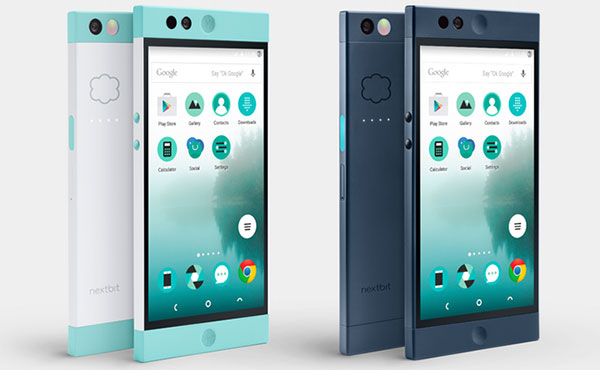 Nextbit earlier this week launched a Kickstarter campaign forRobin, a cloud-connected Android smartphone. Robin boasts a streamlined interface that does away with bloatware and automatically offloads data to the cloud.

The company expects to ship Robin running Marshmallow, the next version of Android — unless the OS’ launch is delayed. In that case, Nextbit will issue an over-the-air update when Marshmallow rolls out.

The phone will learn which apps owners use and the space they need, and automatically offload unused stuff to the cloud. Its default setting will back up apps and photos to the cloud whenever it’s connected to WiFi and a power outlet.

Users can restore offloaded apps and photos to the phone’s memory by tapping on their icons.

Robin manages power based on the user’s habits, and it supports quick charging.

“The cloud computing approach is a clever way to make sure your phone is humming along nicely, but do you think the average user understands the cloud enough to make the purchase?” wondered Ramon Llamas, a research manager at IDC.

“If everything’s up on the cloud, think about what it means to be connected on this phone,” Llamas told TechNewsWorld. “You’re always going to need a WiFi or cellular carrier connection, and carriers will be concerned the phone will burn through a lot of data.”

Robin has a 5.2-inch IPS LCD 1080p display, 3 GB of RAM, 32 GB of onboard memory and 100 GB of online storage. It has dual front-facing stereo speakers and a fingerprint sensor.

Robin supports NFC. It has a 13-MP rear camera with phase detection autofocus and dual-tone flash, and a 5-MP front camera.

There are no third-party apps preinstalled.

Robin comes with an unlocked bootloader and open source drivers. Users can load CyanogenMod or any other ROM and the warranty will still hold good, even if the phone is bricked.

Nextbit is selling Robin directly to consumers through its Kickstarter campaign, and it will provide buyers with an unlocked SIM.

How the device will work with carriers’ networks is not clear.

“I’ve heard they’re looking to team up with AT&T and T-Mobile initially, and later with Verizon and Sprint,” said Susan Schreiner, an analyst at C4 Trends.

Kickstarter backers quickly snapped up 1,000 phones at the special early adopter rate of US$299 — that deal is closed. Backers can buy Robin for $349 until Oct. 1.

“This is where it’s going to get people,” Llamas remarked. “$400 unlocked is a bit steep for some people, and Android smartphone prices are heading the other way — and you’re looking at a phone from a new company.”

Distribution also might be a problem –the direct-to-consumer route did not work for Google’s Nexus smartphone.

The public seems to love the concept of a smartphone that’s smarter about using the cloud. With 26 days remaining in the Kickstarter campaign, more than 2,160 backers already have contributed upwards of $817,400 — far surpassing its $500,000 goal.

Robin ships to the U.S., UK, Canada, Australia, New Zealand, and a number of countries in Europe and Asia. Estimated delivery date is January or February 2016, depending on the amount pledged.

“This might appeal to business users who have entire campuses connected via WiFi,” Llamas suggested, “but the question then is, what other enterprise-oriented features are available that would work well on the phone?”