Nismo Gizmo May Give Drivers Another Reason to Fiddle

Nissan on Monday unveiled a concept smartwatch that will connect drivers to their cars and provide them with real-time biometric data while tracking their progress across social media.

The Nismo Concept Watch will be created for drivers of Nissan Nismo cars. 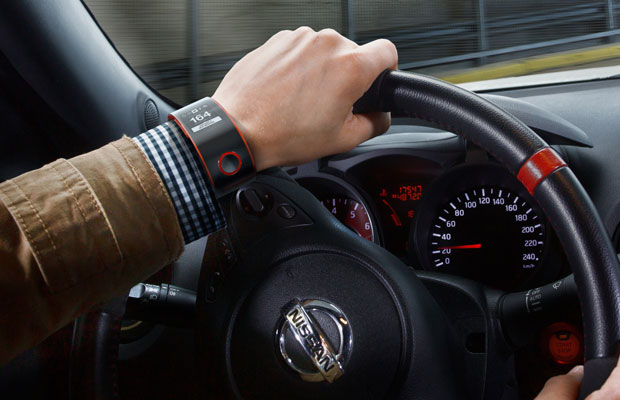 It will be on display at the Frankfurt Motor Show, which runs from Tuesday through Sept. 22.

Nissan’s Vision for the Nismo

The Nismo watch will give drivers average speed and fuel consumption readings. It will also let them access a vehicle’s telematics and performance data in motion; capture the driver’s biometric data through a heart rate monitor; connect to the car using a smartphone app through Bluetooth Low Energy; and receive tailored car messages from Nissan.

The watch will be a spinoff of work being done at the Nismo Lab — a bespoke, mobile lab Nissan launched earlier this year.

The Nismo Lab uses the latest advanced biometric training tools, including brainwave technology monitoring and JukeRide — a performance analysis tool that captures live biometric and telematics data from Nissans cars and their drivers during races.

The watch will be offered in black, white and black-and-red.

The watch will use a lithium battery with more than seven days’ life between charges. It will have a microUSB port for charging.

The Nismo Watch is “something of a marketing gimmick,” Canalys’ Matte told TechNewsWorld.

Given that Nissan plans to transmit what it delicately terms “tailored car messages” over the device, he may be right on the money.

Those messages and the social media tracking, as well as the information about the car’s and driver’s condition, may constitute a danger to drivers.

“If they encourage the driver to look at anywhere other than the road, it’s a distraction,” Matte pointed out.

Distracted driving is a real problem. Every day in the United States, more than 1,060 people are injured and more than nine people are killed in crashes involving a distracted driver, according to the Centers for Disease Control and Prevention.

Distracted driving isn’t limited to talking on a cellphone or texting while behind the wheel.

“Our research has demonstrated the dangers of distracted driving in all forms, whether motorists take their eyes off the road, hands off the wheel, or mind off the task of safe driving,” AAA Foundation for Traffic Safety spokesperson Bruce Hamilton told TechNewsWorld.

There must be careful evaluation before new products are made available to drivers, and access should only be given to functions necessary for safe driving while the vehicle is in motion, Hamilton suggested.

On the Other Hand

“This watch is mostly to connect you to your car and the brand when you are away from the car,” Robert Enderle, principal analyst at the Enderle Group, told TechNewsWorld.

“Much of the stuff that is real time is available on your dash, [so] the only things that might be a distraction are SMS or social media alerts, which is true of any smartwatch,” he pointed out.

Those are the things that are really worrisome, Robert Rosenberger, an assistant professor at Georgia Tech, told TechNewsWorld — “smartwatches that enable us to communicate with others, such as those which allow us to send texts or access social media while driving.”