Passing the Torch at Apple and HP

With Steve Jobs’ passing, last week was a sad one for the technology industry, which owes much of its current success to him and will remain forever diminished by this event. Even as people talk about his uniqueness, they also don’t seem to get that he can’t be replaced like you would replace a shoe or a shirt. Teams are complex, and the team that ran Apple was uniquely successful and powerful. Without Jobs, it is diminished; we just don’t know how much yet.

On the other side of the street, we have HP. Last week, I spent a day at its printing and imaging division in San Diego, where “the HP Way” has been successfully preserved. While there, I was told an interesting story about how Meg Whitman was reinventing HP and herself.

Last week was about passing. I think I’d like to start this week on a hopeful note. Just as Steve Jobs reinvented Apple, I’ll focus on the Whitman reinvention of HP and the new HP Way.

I’ll close with my product of the week, the Ooma Telo.

Let’s be clear — Apple was a unique property. It massively outperformed almost every other company in the U.S., and it did so with consumer electronics — a market that was, with the exception of Apple, a low-margin business. This isn’t trivial. This is like shooting flies at 50 yards with a bow and arrow, blindfolded and drunk. To say you don’t see this often would be a massive understatement. Steve Jobs made it look easy, but it was everything but.

Jobs got there by being incredibly focused and driven. Apple, for the most part, was his life. But it wasn’t Jobs alone — he had handpicked and crafted a closely knit team covering operations, design, engineering and marketing. Each was handpicked not only for specific skills, but also to dovetail with Steve Jobs’ weaknesses. This was a well-oiled and unique machine.

Another example of a machine was Bill Gates’ Microsoft. Every person, including Bill, had a unique part to play, and even though Bill handpicked Ray Ozzie to fill his unique skill set, that didn’t work out particularly well. Apple doesn’t have anybody like Steve Jobs, and Microsoft doesn’t have anybody like Bill Gates — but Microsoft is vastly more complex and has massive distributed revenues. Apple, by design, is far simpler and is expected to have hit after hit after hit. That last was something Microsoft never really achieved.

In short, Apple without Jobs isn’t Apple — at least not the Apple we’ve come to know over the last decade. Already Cook is making changes to the recipe that took Apple to such lofty heights. Initially, it’s little things like restoring the philanthropy program (something Jobs thought was distracting and inappropriate), the way products are announced (by feature not by benefit) — and you can even see some changes to how Apple approaches media.

Steve left Apple in great financial shape, and that should hold the company for at least six and maybe as many as 12 months. However, Apple will have to change at some point, like Microsoft and Disney — and using those two companies as examples, odds are it won’t be for the better. In short, not only was Steve Jobs amazing, he was largely irreplaceable. Until Apple figures out how to really replace him, its continued success will be at increasing risk.

Meg Whitman has been meeting with a lot of HP employees, and the feedback I’m getting is one of hope and measured excitement. The measured part is because these employees have been hopeful before and very disappointed by the series of CEOs that preceded her. But she is saying the right things and listening to how the businesses are run before moving in and making decisions.

The big change is her first stated goal: to restore institutional succession planning to HP so she is the last external CEO, and HP can do what IBM and other long-term companies do and more often hire from inside to ensure some strategic continuity.

Reports are that she is asking smart questions. While it is a given that she doesn’t yet fully understand HP’s massive breadth, she appears willing to learn and doesn’t intend to be a long-term fixture. I think something interesting is going on here. I think Meg realizes she has a unique opportunity to make HP’s success part of her legacy — and that if she is successful, this will be largely how she will be remembered. Much like Steve Jobs is remembered not for his initial failure at Apple or failure with NeXT but for his successes with Pixar and the triumphs following his return to Apple.

In the end, this would allow her to retire at the top of her game, and she appears to understand that the best thing any CEO can do is leave a company better than she, or he, found it. Jobs clearly did that. While Meg is no Steve Jobs (no one really is), she appears to have given the HP folks well-founded hope, and that is a good start.

It’s too early to call this a recovery yet, but it does provide positive signs that HP’s recovery is coming. In the end, if she is successful, she won’t just reinvent HP but herself — and she seems to get this, which may ensure her success. We’ll see.

HP and Apple appear to be on opposing vectors — both tied to leadership changes. Both will likely change almost imperceptibly to the outside world at first, but more rapidly inside. In the end, it would be hard to imagine HP getting worse. It does look like Meg Whitman is starting smart, but she will need to find that magic formula — or someone else who can — to fully restore HP.

On Apple’s side, it looks like the beginning of a normal progression, much like we saw at Microsoft, where the executive left behind doesn’t fully appreciate the value of the person he’s replacing and doesn’t backfill the critical leadership, creativity or visionary skills. I expect that within 12 to 24 months, we’ll once again realize how unique Steve was and miss him even more.

Product of the Week: Ooma Telo

As some of you know, I’m in the process of building a couple of houses in Belize (the first one will be one of these models for those of you following this adventure), and I plan to retire there in a decade or so. However, one of the big initial problems is that phone calls in and out of the country are very expensive, and the country blocks Skype.

Well I found an interesting product called “Ooma Telo.” The device is about US$200, and the annual premium service (which includes free phone number transfer) is $9.99 a month. Wireless handsets (up to four) are under $50 each, but it will work with your existing phones. 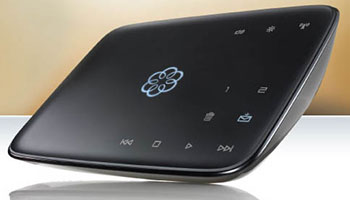 This is an Internet-connected box that provides rich VoIP (Voice over IP) services, and it also optimizes for sound quality, which is important for me because I do a lot of radio and TV over the phone.

With the Ooma Telo, you get a VPN pipe back to the U.S., so all calls are as if they were made from the U.S. and are free in-country. If you vacation out of the country but, like me, still work while on vacation, this product likely should be on your must-have list.

Like other VoIP solutions, it saves money on calling internationally, and like Vonage, you can hook your existing phones to it and move your phone numbers. By the way, I’m told Vonage works in Belize as well, but this seems easier, and the HD voice quality is a distinct advantage — particularly if you use the Ooma wireless handsets.

In the end, the Ooma Telo gets me one step closer to my dream vacation/retirement fantasy, so it is my product of the week. Eventually, I hope to be writing this column from there.